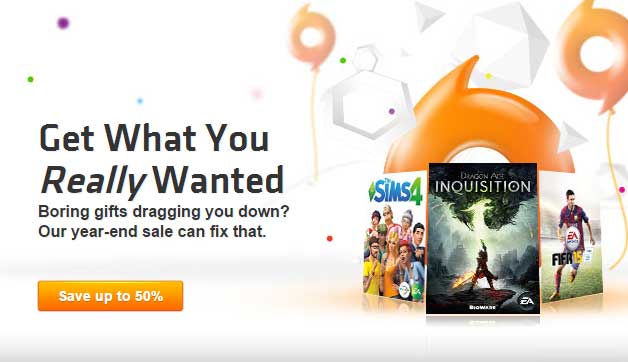 Forget the Christmas sale: Origin are having their New Year Sale right now.

You pretty much know already what’s included in the the EA catalogue, and with the Steam sale in full swing, I’m not sure how many PC gamers will be rushing over to Origin to take advantage of the discounts. Looking through the list it’s the usual mix with Battlefield 4 going for £7.39, the disappointing Sim City is up for £4.99 which is probably a good price for it now but oddly enough the same price as Sim City 4, and The Sims 4 is also down to a more reasonable £29.99. I’m pretty sure that some of the prices listed are almost identical to the last Origin sale, but a few like The Sims 4 are about a tenner cheaper than that sale.

The problem with most of the AAA EA games is that they’re highly priced to begin with so even with a discount there’s not many massive bargains to be had. There’s some OK games on the list but it’s nowhere near as good value for money compared to what’s going on over at Steam right now.

There’s cheaper games but most prices are not low enough to make them tempting. Still, you might be tempted by Dragon Age: Inquisition! *cough*