Orwell, the indie hit that’s become a commentary on government surveillance and privacy concerns, is free on Humble Bundle for the next 48 hours. Or, as Humble puts it until supplies (keys) last. 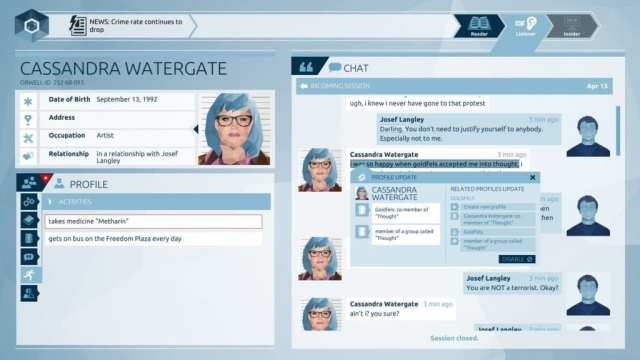 Orwell – Keeping an Eye On You

That’s the game’s full title. It pretty much alludes to author George Orwell whose works depicted a draconian regime. Orwell’s novels Animal Farm and 1984 still chilled readers to the bone then as they still do today. The term “Orwellian society” wherein the government monitors the private lives of its citizenry has become even more topical given today’s landscape. Issues abound such as internet security, data privacy, wiretapping, spying, hidden records, communications tracking, and profiling.

Orwell follows that concept to a T by turning you into Big Brother’s own handyman, a researcher investigating citizens. Due to a terror attack, you’ll have to monitor citizen communications and records. All this is to profile anyone who might be a person of interest. It’s a fascinating display of a game giving the player the freedom (ironically) to be as ruthless, heavy-handed, or discriminatory as he can be. All the while, the mechanics, and your actions make it seem as though related to timely issues. You might not like how government surveillance can be invasive in real life, but how will you react when you’re the one with the power in your hands?

You can grab Orwell free on Humble Bundle right here and then register it on Steam. What are you sitting around there for? Big Brother… is waiting.

The Corridor: On Behalf Of The Dead,Coming Soon to Steam and PC