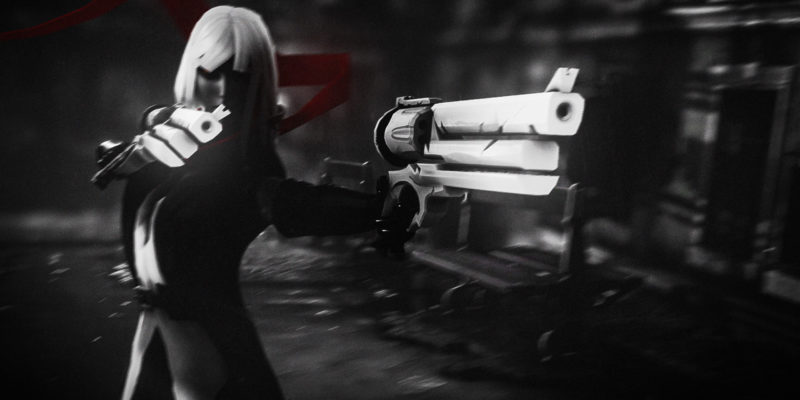 Othercide‘s punishing difficulty will likely leave you wondering where it all went wrong. As mentioned in our official review, the game throws ridiculous challenges along your way. Still, there are means to improve your chances of survival and winning most combat engagements until that eventual restart. Here’s our beginner’s guide with several tips to help you out. 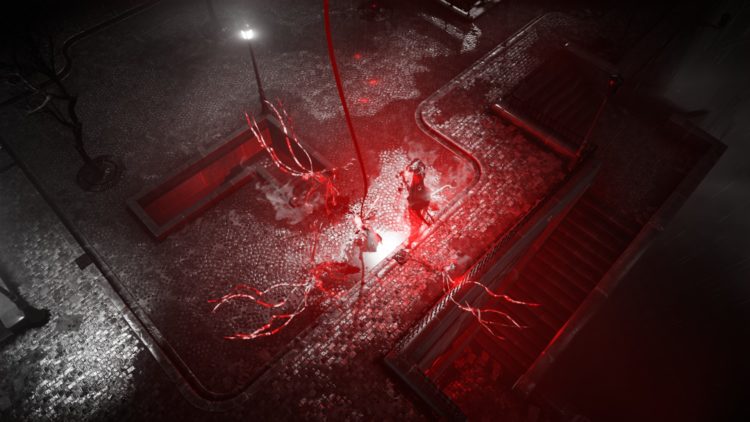 Othercide uses what’s called a dynamic timeline system where you can affect when a unit takes their turn. Think of this as akin to mechanics in games like Grandia, Child of Light, or the more recent XCOM: Chimera Squad.

The game, likewise, uses a concept called “initiative” which determines how early a unit can act in the timeline. This is also partially based on how many action points (AP) you spend. Oh, and almost everything you do, be it moving or attacking, costs AP.

Note: The only abilities that don’t consume AP are “reaction” skills (more on these in a while). 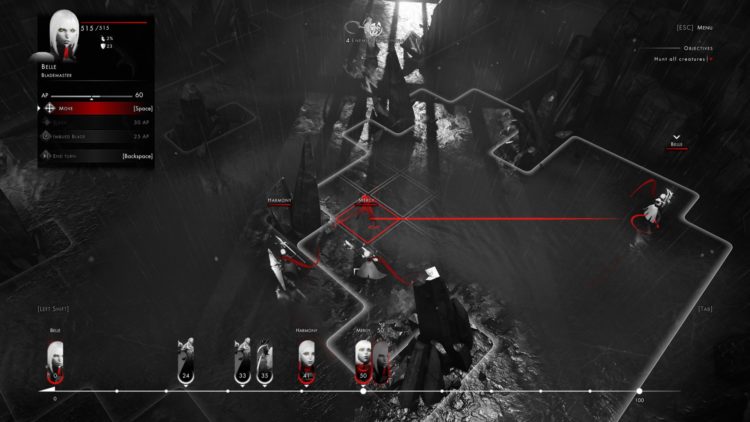 In Othercide, if you end a Daughter’s turn with 50 AP remaining or higher, she’ll have a higher initiative value so she can take her next turn normally after a couple of enemies.

However, if you go even a single point below 50 AP, you’ll enter a “burst” state. This drops your initiative like a rock and pushes you all the way to the end of the timeline. That means several enemies can move, attack, and spawn multiple times before that particular Daughter gets to have her turn again.

Ideally, you should only “burst” if: 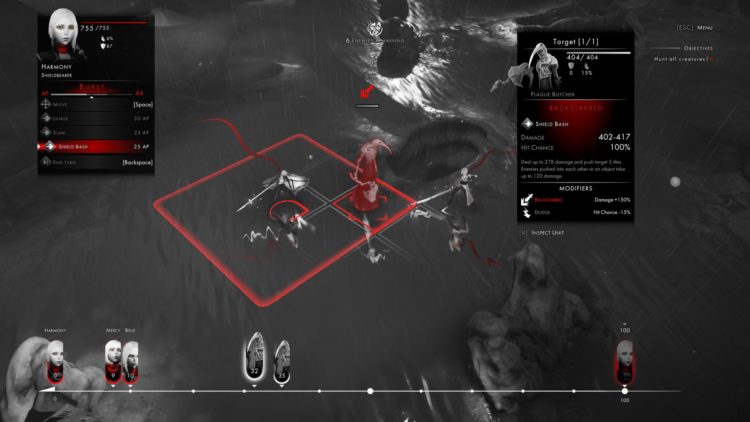 3. When to use reaction skills?

A majority of your time battling foes in Othercide will see you using “active” skills (aka. instant or charged abilities). Again, like movement, these will cost a lot of AP (and most attacks will cost 25 to 35 AP even). If you don’t want to spend a lot of AP (and enter a burst state), or you want to play more defensively, then you can use “reaction” skills.

The good news: reaction-type skills don’t cost AP at all. The bad news: they cost health instead. 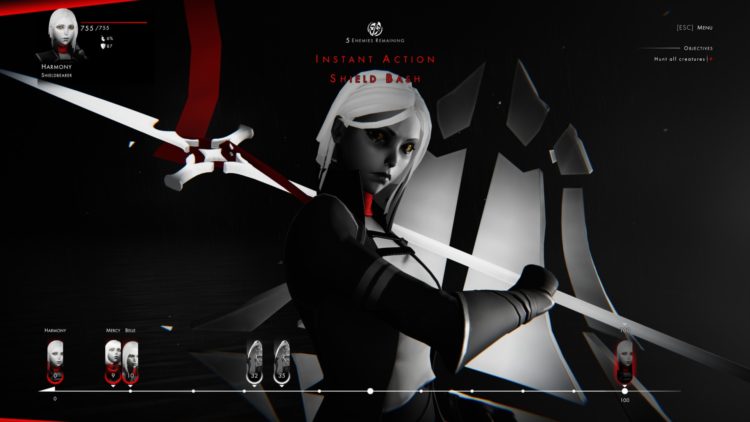 4. Healing up and sacrificing Daughters

You can’t heal normally in Othercide. This makes taking damage or excessively using reaction skills extremely detrimental. The only way to actually heal a Daughter back to full health is by sacrificing another Daughter that’s at an equal or higher level (the class doesn’t matter).

Sacrificing a Daughter will let the healed character gain the sacrificed unit’s trait (ie. boosts to dodge or damage). But, because Daughters need to be at an equal level for sacrificing to work, that also means you might need to level-up someone just to, metaphorically, turn them into a healing potion in the end.

Note: For more tips, check out our Daughter resurrection guide. 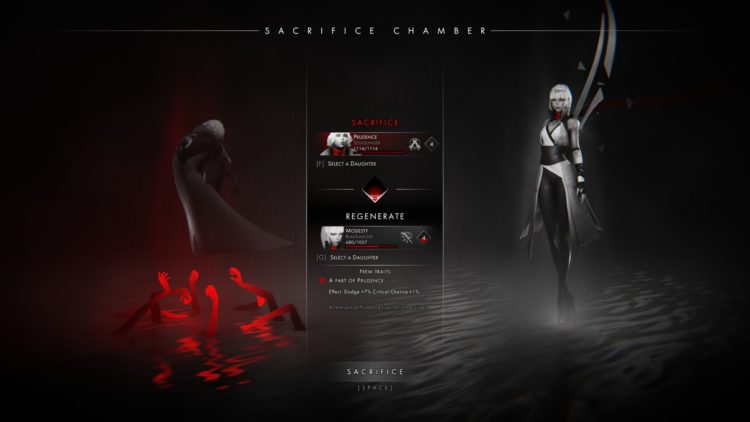 There are dozens of “memories” to find in your Othercide playthrough. Just think of these as skill mods that can buff damage, cause armor penetration, or delay a target’s turn. Slotting them in a skill costs vitae (aka. gold obtained from missions; the same resource used to recruit new Daughters).

You need to kill certain enemies to obtain memories, though it’s not really clear what the requirements are. Heck, even I realized during the game’s final chapter that I wasn’t able to acquire a mod from chapter one. I found out that I was missing something only when I checked the Codex -> Memories panel.

Note: Speaking of skills, you could take a look at our class guides for the Blademaster, Shieldbearer, Soulsinger, and Scythedancer. 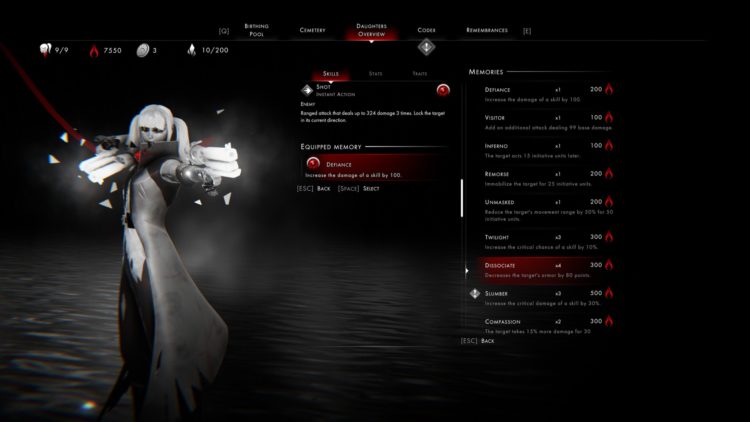 
Othercide has five chapters or “eras,” and each one has seven “days.” Each day, you’re required to complete at least one mission to progress to the next. Try to avoid Rescue missions since they’re a pain in the butt. Pick Hunt missions since they’re more manageable. Oh, and periodically, you might even spot some events that grant temporary positive or negative effects (seen below).

Regarding bosses, you can battle the chapter’s boss as early as Day 4. Once you reach Day 7, there will be no more missions save for the boss fight. Now, if you accidentally make a mistake during any encounter, you could hit Alt+F4. This will reset the fight when you reload your save.

Note: You could read our missions guide for more info. 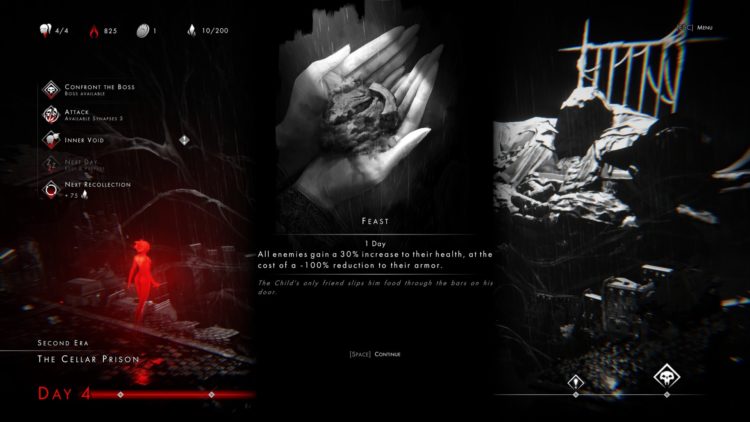 7. Death is only the beginning

Othercide‘s roguelike elements come into play whenever you wipe at a boss or whenever you choose to undertake another Recollection (aka. restart the campaign). But, you won’t need to start empty-handed because you can use Remembrances. These are perks that provide lots of bonuses to help you in future runs. Some of these let you resurrect Daughters, have them start at a higher level, increase your damage versus certain enemies, or increase the drop rate of memories.

Note: You can view our Remembrances guide if you need more help. 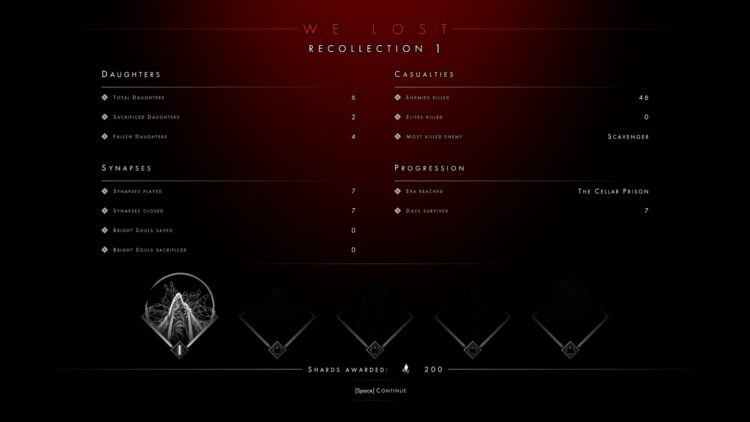