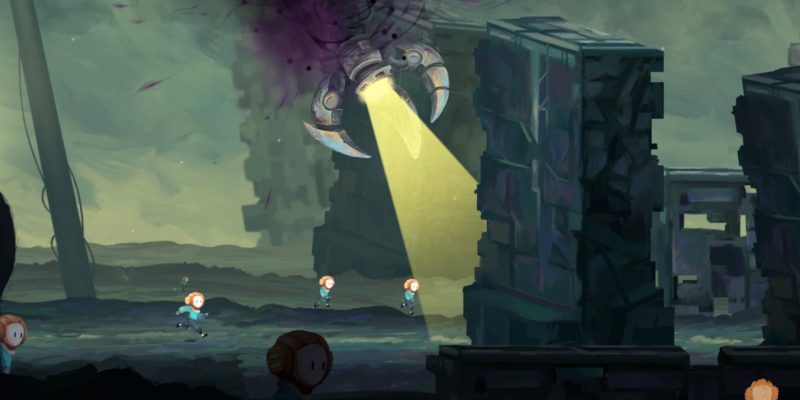 The undeniable joys of hand-painted vistas cannot be overstated. From a flick of the wrist to a splash of color in a digital world, the beauty of raw talent is something that always makes me feel a bit of subdued melancholy as the tones and hues guide me along with the creator’s vision. Out of Line is lovely, carrying with it some of the highest quality 2D artwork that the medium can offer. I was allowed early access to a preview build ahead of the title’s Steam release later this year, and I walked away intrigued by what the game offers.

Out of Line places the player in control of a young boy. He chases a golden cube toward a tree and all is peaceful. Alas, a metal claw rends the solitude, attempting to grasp the cube. In an act of defiance, the golden cube opens a hole in space and we are taken elsewhere. This place is known as The Factory, and the claws of these metal monstrosities cover the world, as does their menacing machinery. Contraptions spit out contorted hunks of metal and conveyor belts pulse with electricity. We must guide the boy to safety.

To achieve this, we acquire a spear tipped with golden light. ‘Tis no ordinary spear, however. We throw it in a wide arc, the sharp point cutting through the air to impale itself on whatever surface with which contact is made. Once embedded, the spear can be leaped upon, not only acting as a platform, but granting the boy a bit of a bounce, allowing him a few extra feet of airtime. After the spear is lodged where it lands, there it remains. That is, until we call it back on command. Out of Line tasks us with guiding the boy to safety, often by maneuvering up inclines with the help of the spear. Our faithful, sharpened contraption is also used to hold down yellow switches. Standing on weight-activated pedestals often turns gears overhead, which the indestructible spear can be tossed into, holding the gears in place. Doing so is used to halt the movement of barriers and platforms. But we aren’t only meant to help the boy. There are other characters who require our assistance.

The first level in Out of Line shows numerous, seemingly identical boys similarly attempting to escape their predicaments. All of them can be seen on their own layer. The artistry is striking, with the multiple layers of escapees contributing to a surreal, yet compelling portrait. During the first level, we must cooperate with another boy, often guiding him to safety alongside our own. The second sees us assisting plant creatures to avoid light. Of course, there is danger at every turn. One section sees the boy frantically sabotaging gears to stop compactors as they move, lest he be ground to dust.

This preview build of Out of Line granted me about 40 minutes of playtime, before a mysterious ally arrived on the scene to aid me. My curiosity is piqued for my next chance to dive more deeply into this world. I especially wish to see even more of the game’s wonderful art, as I expect the rest of the experience to be as lovely as what preceded it.