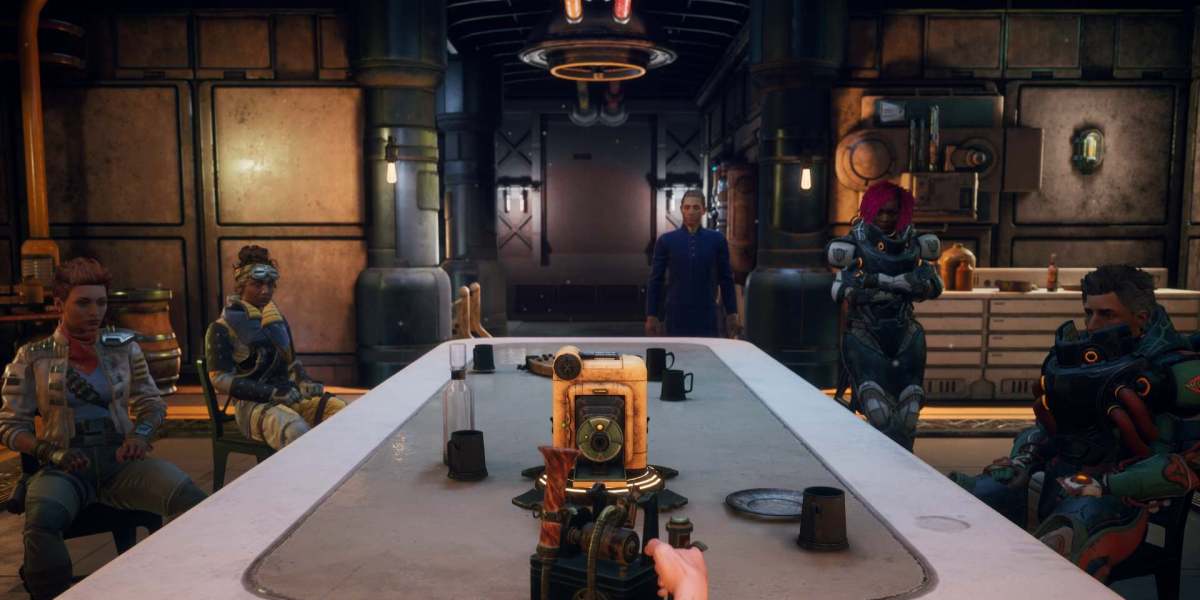 Danger, corporate intrigue, and a chance to make a ton of bits are all the hallmarks of the first DLC expansion for The Outer Worlds, Peril on Gorgon. The expansion drops you into a film noir-style mystery. A severed hand points you in the direction of Gorgon, a giant asteroid that Spacer’s Choice used as a research and manufacturing area until circumstances forced it to quickly evacuate and leave many of its staff behind. Now it has become a scavenger trap filled with marauders, mutant creatures, and other dangers… but mostly marauders.

You’re able to access Peril on Gorgon shortly after you turn in the Radio Free Monarch mission. A courier drops a mysterious package off in your cargo hold. Inside is a severed arm and a message leading you to a wealthy heiress Wilhelmina (Minnie) Ambrose. She wants you to land on the asteroid, figure out what Project Gorgon was, and locate her mother’s journal to clear her family’s name so that she can return to high society by Byzantium. Of course, she clearly has ulterior motives, but that will be revealed later.

It’s important to note that the DLC contains mid-game content and cannot be accessed during or after the main story’s finale. You’ll have to either start a new game or load up an older save game file. After accepting the mission and landing on Gorgon, it quickly becomes clear that he rumors of its ruined state were totally understated.

Gorgon is comprised of a handful of major buildings that are tightly locked down. There are also some apartment complexes and areas such as an underground mine peppered in if you’re brave and tough enough to explore them. The first building you’ll encounter on Gorgon is the Sprat Shack, a converted warehouse where scavengers rest and try to drink their depression away.

You started once you’ve gotten some equipment and a few clues. The latter of which includes a severed eyeball that gets you into the Office of Creative Incubation (OCI), which serves as the marketing division. Soon, you’re trading bullets with groups of marauders in addition to battling dangerous animals. That might sound much different from visiting any other place in Halcyon, but these marauders are different. 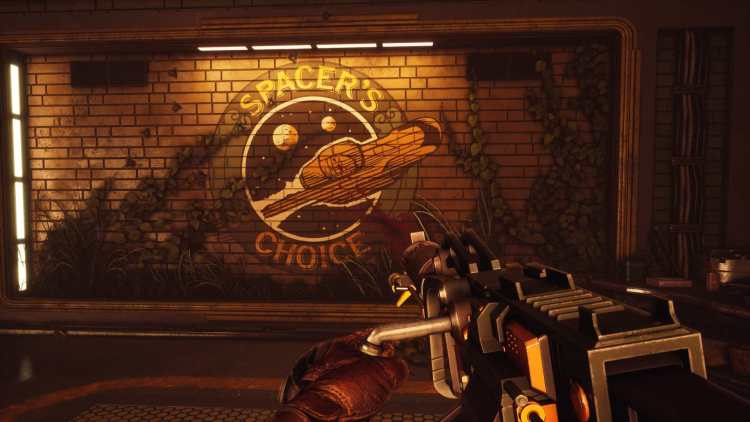 Get used to seeing the Spacer’s Choice logo and mascot everywhere you go. They owned the place.

While traversing the asteroid, you’re often reminded that Spacer’s Choice dabbles in pharmaceuticals on top of making cheap weapons and armor. Chief among them is Adrena-Time, which is designed to help workers stay awake for long hours to maximize productivity. While you’re likely to come across a handful of Adrena-Time injectors while playing the main campaign, Gorgon is practically swimming in the stuff. It significantly enhances your movement and melee attack speed for a short time, but hits you with a crash that reduces your attributes and walk speed until you sleep or change zones. Worst of all, the crash stacks up to three times, which made me wonder why anyone would want to use the drug at all.

Well, it turns out marauders love the stuff and pop them like candy, giving them super speed. If nothing else, Peril on Gorgon certainly makes strong use of your Tactical Time Dilation (TTD) abilities to temporarily slow things down. They also seem a bit tougher than your average marauder when you first encounter them. For my playthrough, I mainly relied on my companions to do most of the fighting while I helped pick off enemies from afar. Although it’s not too much of a change, encountering familiar-looking enemies that have been modified to become more dangerous than usual does inject some newness into the game. The only foes that remain relatively unchanged are the homicidal robots. 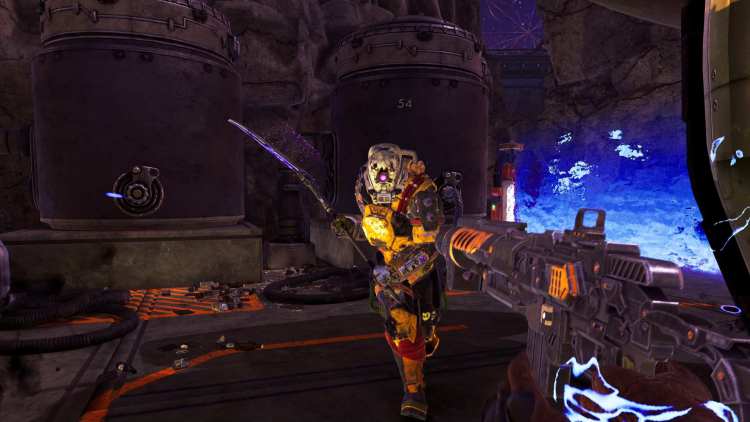 The additions are thrilling at first, but it doesn’t take long for the novelty to wear off. Although there are pockets of creatures to help keep things interesting, walking around a landscape where marauders cover almost every square inch can grow a little tiresome. Fortunately, the action isn’t completely limited to the asteroid.

Once you manage to get through OCI, you travel across the system to gain access to additional facilities. This means accessing new areas in familiar places such as Byzantium and the Groundbreaker to meet some of the senior staff members who managed to escape Gorgon during the evacuation. Best of all, you’re attacked by an ex-Tossball-turned-mercenary team, which adds some extra hilarity to the mix.

There are hints to the Spacer’s Choice conspiracy that are subtly included in the main game, which make much better sense after playing the expansion. The big mystery behind Project Gorgon is revealed early on, with an antagonistic figure straight up spelling it out for you once you finish raiding OCI. Additionally, some of the side missions have hard-to-miss hints about what’s going on if you’re inclined to do some reading. 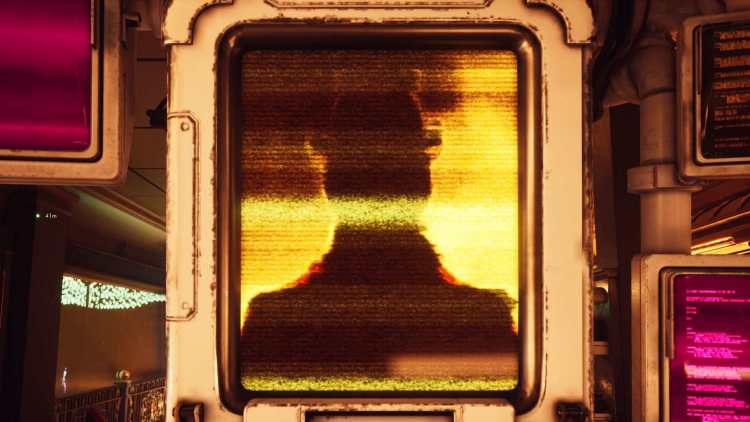 In Halcyon, threats from random strangers are usually taken as personal challenges.

Once you get the big plot reveal, the rest of Peril on Gorgon takes you through the events that led to the emergency evacuation. You don’t have to dig very deep to find out how terribly mismanaged Spacer’s Choice is, but fortunately, the cover-up means that there’s little that you can do on Gorgon to damage your reputation with the company. Your vendor discounts are safe.

The expansion can be a lengthy experience if you’re intent on taking on side missions. Of course, this is The Outer Worlds, so there are multiple ways to solve problems and pursuing different endings depending on your choices. I ended up going on as many side missions as I could, which significantly extended my experience. By doing this, I grew from level 22 to the new level 33 cap by the time I finished the expansion. If your character is already at or is close to 30 to begin with, then you’re likely to breeze through the content on normal difficulty. 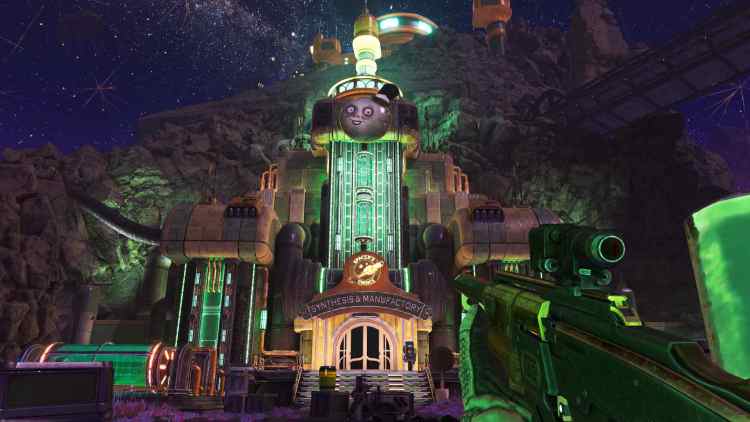 Yes, your ultimate destination on Gorgon is the S&M building.

For the most part, the DLC expansion plays out in a somewhat predictable fashion. Although I was able to figure out most of the subplots well before they were revealed, I still enjoyed the process of breaking into facilities, smashing faces, and collecting clues alongside rare weapons. One of my favorites is a target-seeking rocket launcher won from defeating Charles from Accounting, who hangs out deep within a marauder encampment.

Peril on Gorgon also adds a significant amount of dimension to Halcyon without actually making an impact on the main narrative. It’s not like uncovering the conspiracy will take Spacer’s Choice down, put a dent in its business, or encourage it to reform. Like with the other planets in Halcyon, Gorgon exists in a bubble. However, at the end of the day, having additional Outer Worlds content with its off-the-wall humor is always welcome. Gorgon also happens to be a fantastic place to visit if you need to get your hands on a ton of Adrena-Time, so crash away.

Although battling endless hordes of hyped-up marauders can grow tiresome, Peril on Gorgon adds a welcome depth to the narrative with plenty of humor wrapped in a sci-fi film-noir mystery.