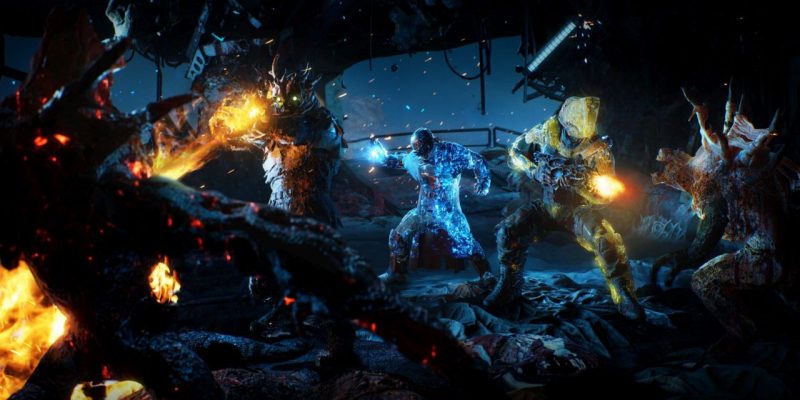 With the release of Square Enix and People Can Fly’s Outriders coming up real fast, players are definitely eager to jump in and wield some otherworldly powers in the pursuit of glory. However, before you decide which classes to be your main, you would be better off knowing if your rig can actually run the game. The Outriders system requirements for Ultra settings have been revealed, finally, along with the game’s worldwide release times.

That is, if you want to run the game at 4K Ultra settings. Considering that most folks are still unable to get their hands on the latest GPUs on the market, most of us probably will not be playing the game with the highest settings. Thankfully, the requirements for those are much more reasonable.

The minimum Outriders system requirements are straightforward enough. At the low preset of 720p, 60 fps, you are looking at an Intel i5-3470 or AMD FX-8350 CPU. You will need 8GB of memory, alongside DirectX 11 and 70 GB of storage. The GPU should at least be a GeForce GTX 750Ti or a Radeon R9 270x.

If you prefer your games to look more modern, the high preset of 1080p and 60 fps should be what you are aiming for. The recommended Outriders system requirements will need an Intel i7-7700 or AMD Ryzen 5 2600X CPU — 16 GB of memory, with DirectX 12 and 70GB of storage will serve you well. Lastly, your GPU should be either a GeForce GTX 1070 8GB or the Radeon RX Vega 56 8GB. 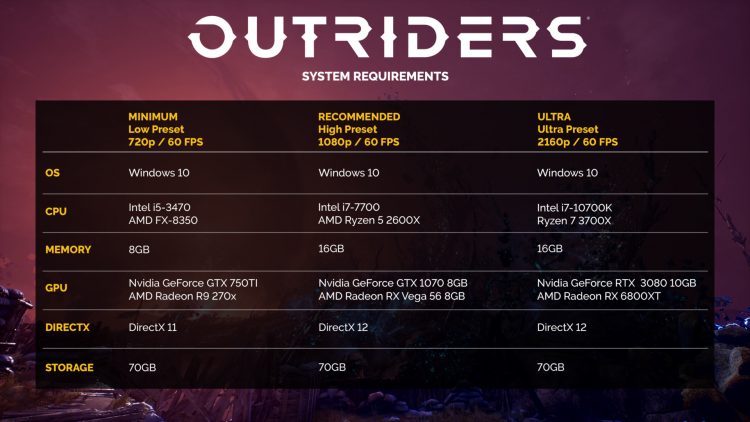 For those that can afford it and have the components to match, you most definitely want to enjoy the game at its best. The Outriders system requirements for Ultra, which runs the game at 2160p and 60 fps, will require either the Intel i7-10700K or Ryzen 7 3700X CPU. You still need 70 GB for storage, as well as 16 GB of memory and DirectX 12. The GPU will minimally need to be either a GeForce RTX 3080 10 GB or the Radeon RX 6800XT.

Once you got all of the Outriders system requirements sorted out, you will be ready to start this April 1. For the various unlock times, please refer to the image below. Good luck, hero. 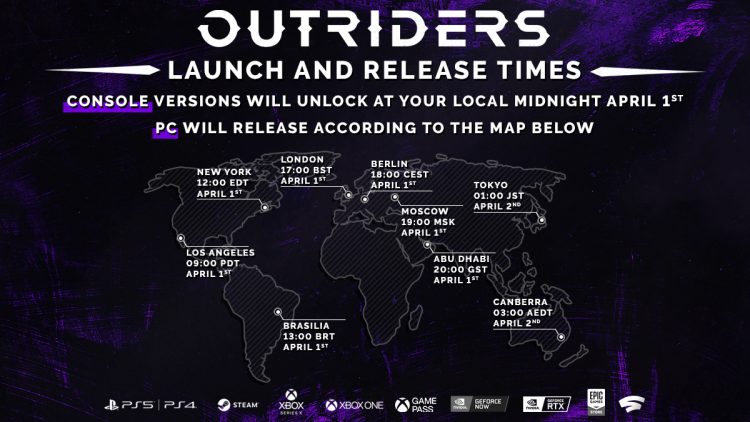 Sega issues piracy-related DMCA notice to SteamDB for Yakuza: Like a Dragon [Updated]