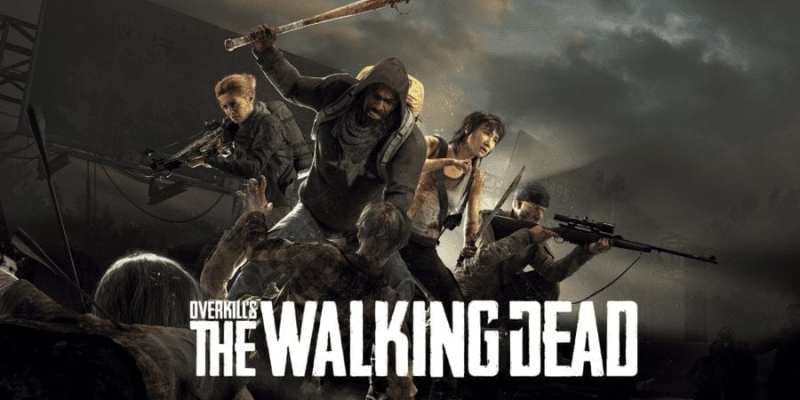 Overkill’s The Walking Dead is nothing like I expected it to be, both for better and for worse. I wasn’t too thrilled with the offerings from the Starbreeze Studio when I played the game during E3 2018. A colleague of mine sat down to play with me on four small stations during the show. We were fitted with headsets and ready to take on the undead.

Following our session there, I couldn’t help but feel that the game had a long way to go, both visually and mechanically. After seeing a small delay, Overkill’s The Walking Dead has now been released into the wild. And honestly, my sentiments haven’t changed all that much.

Probably the most overwhelming part of the experience can be found in the game’s menu design. As you progress through the map, you’ll find different scenarios that open up. These vary from stand-your-ground base management to objective-based levels. Each time, your goal is to complete the mission, receiving materials and weapons. The Anderson Camp initially acts as a home base, offering small role-playing elements in this hub.

The game’s classes play an important role in how you approach each mission. Normally, I would have focused on leveling at least two different types of classes depending on how important their role was to the story’s progression. I did feel that the game restricted this freedom, specifically in how it divvied out experience points and weaponry. You are often steered in the direction to solely focus on one character and their repertoire of tools. 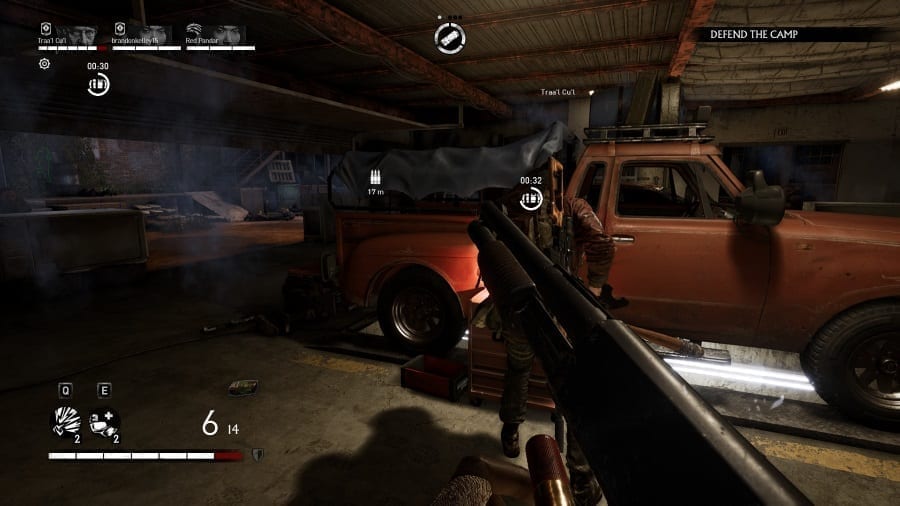 The majority of the time I played as Aidan, who is classified as a “Tank” character. Other classes available include the Scout, Tactician, and Support classes. Aidan, Heather, Maya, and Grant all have their own specific traits and abilities. The skill tree consists of both core abilities and character-specific abilities. I felt like this could have been more streamlined into a single skill map, mixing and matching both core and character abilities to feel less convoluted.

Completing missions in Overkill’s The Walking Dead will allow you to bring survivors back to your camp. You can send these individuals on missions for additional experience or scavenged items. This is done in a stat management format, assigning survivors to tasks. All of these are important to the mainline story of the game, as these missions provide scrap, provisions, equipment, and experience points. 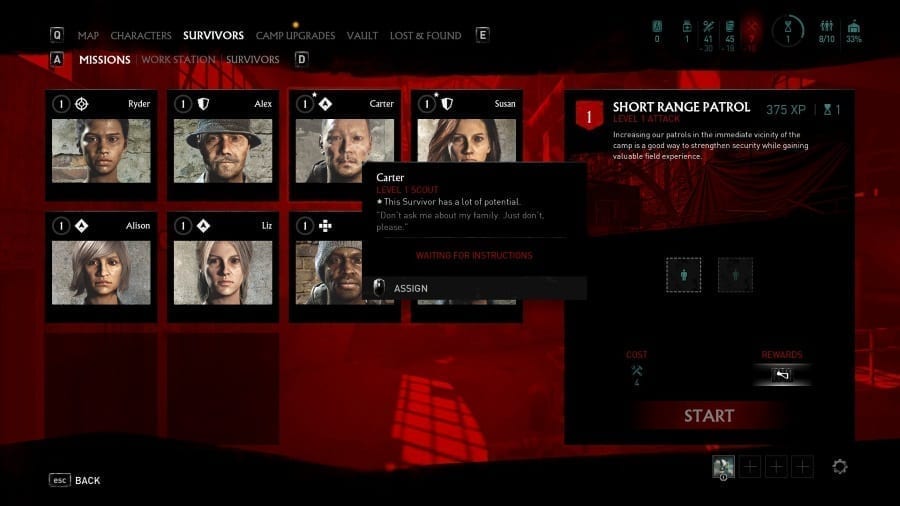 Although pertinent to weapon mods and experience, I felt like this could have been completely removed without hindering the overall experience. At the least, an explorable main hub could have taken its place, watching as your camp visually grew to accommodate new people. Traveling alone to the camp is a cumbersome process, not worth the minutes wasted in loading or time spent there.

Now, I wouldn’t necessarily deem the system nuisance-worthy. But, it never really urged me to pay attention to it either. Even with story missions awarding you survivors to incorporate into camp, it never seems like one of the game’s main pillars. Instead, it feels more like an idea that managed to squeak its way in.

Playing through levels stirred up inner frustrations with the weapons system. You’ll find weapon mods and, at times, be awarded uncommon attachments for guns when the mission is complete. Only certain weapons can fit these mods, a hell in and of itself.

Completing missions is just about the only way to level up your character. In order to do this, you need better firepower. In order to harness better weapons, missions must be completed for XP. Specific combat power is suggested for missions with harrowing difficulty and is based on the weapons you wield. This vicious circle is at a constant struggle with itself to simply make progress. Even skills take a back seat to melee weapons. 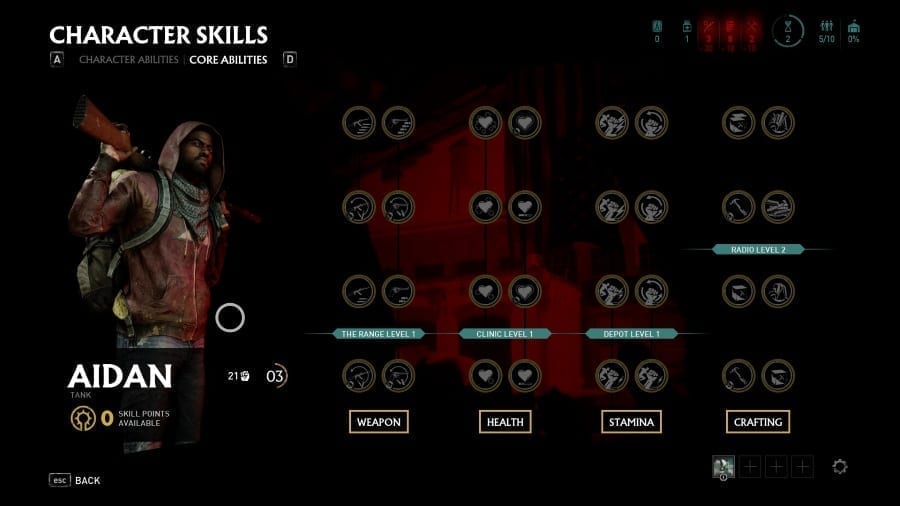 Most of the skills come off as arbitrary improvements, not necessarily having an impact on your character’s performance. Small edits like melee stamina are crucial through the course of the game, as guns without silencers alert walkers. You are at a constant struggle in almost every mission to not tip the scales with excess sound. This also becomes frustrating as weapons are vastly inaccurate, even with powerful, uncommon attachments.

There was one point during a tense mission (which I literally played through about seven times) where I let off 20 rounds at a point-blank distance, only hitting the enemy a few times. Guns can deteriorate too, causing them to jam if not repaired prior. Enemies, on the other hand, have almost deadeye accuracy and can down you during this vulnerable time. When this happens you can either kill yourself off and wait to respawn or wait for a teammate to revive you.

Failing missions becomes commonplace and disparaging due to the time invested. You’ll spend anywhere from 20 minutes to an hour during some of these runs. I found myself grinding through prior missions on higher difficulties just to limp my way on to the next one. I’ll admit, there were times when I really felt the team chemistry after a successful mission. But I don’t know if it was due to shared frustrations or getting the “W” in the end.

Where Do We Go From Here?

At this point, I’ve put close to 20 hours into Overkill’s The Walking Dead. The one thing that has changed from when I first started playing the game until now that I can actually see some good in it, albeit in short spurts.

I’ve had many frustrating moments – things like spawning with my leg stuck in a vehicle and falling through the map or down a short ladder to my death. This doesn’t even account for the connection errors prior, during, or following a match. When you couple this with relentless and annoyingly accurate enemy AI gunfire, it can muster some negative feelings. The lack of voice chat also hinders strategies and hampers overall immersion. 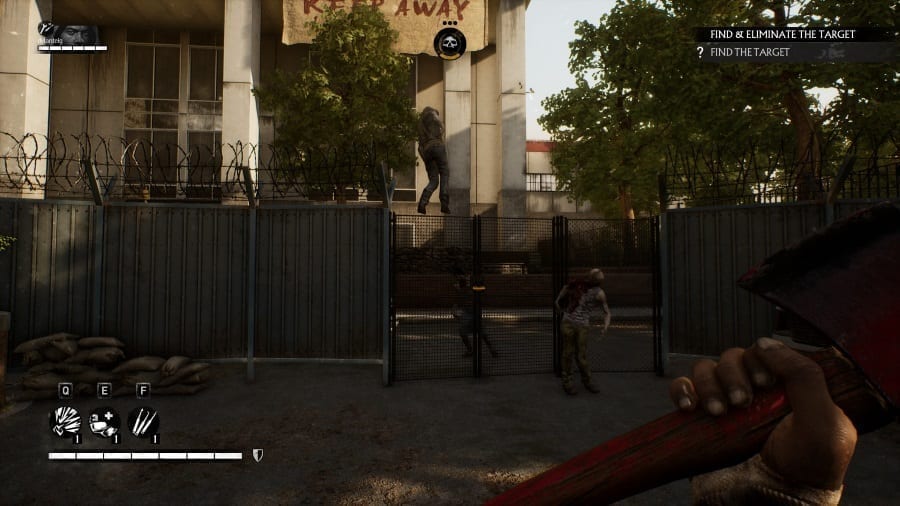 I do have to commend Overkill for absolutely nailing the aesthetic with many of the environments. At times where I was sweeping the streets with my pack while cappin’ walkers in the head, it genuinely felt like I was doing something straight out of the show or, at the least, within The Walking Dead universe.

There are still heavy tweaks needed for accuracy, skill attributes, respawn times, improvements to server connectivity, and bug fixes. I can’t say that it’s been a bad experience, but I can’t say it’s been a great one, either. There are noticeable themes borrowed from games like Left 4 Dead and Dead Island. There is a lot of promise, and maybe I’ll continue to discover more of that down the road. At this time, though, you might be better off with those other, more refined multiplayer experiences featuring zom…walkers.

Overkill's The Walking Dead is an ambitious online multiplayer experience. It nails the aesthetic of The Walking Dead universe. However, it struggles in almost every other department. Bugs and game-halting instances have been very apparent in the near 20 hours spent with it.