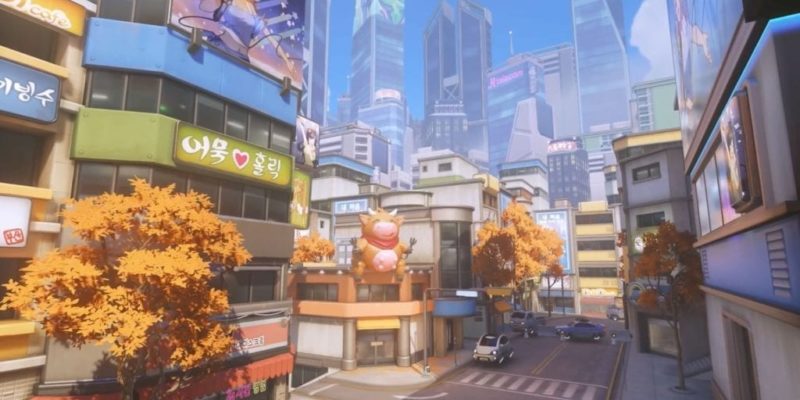 Overwatch has finally released their newest map to the world. Straight out of the PTR, Busan has been added to regular rotation. The map is the home of D.Va, who has had a string of related content recently, and sees the Overwatch teams battling in South Korea.

In the patch notes for the update, Senior Environment Artist Simon Fuchs talks shop about the new map. The first look the public got was in the recently-released Shooting Star short. “[We] worked closely with the cinematics department to recreate the MEKA Base as closely as possible,” says Fuchs. There were concessions made however because above all else, the team wanted the map to be “playable and… fun.”

The map also includes a first for the team: moving terrain. That is to say, moving terrain that can be used for strategic play. In the middle of the map’s MEKA Base, there are three blast shields that can go up and down, giving and taking cover away. This sort of interactive level design is exciting considering most of the maps in Overwatch are static. It makes one think what the future of Overwatch map-design holds.

Grab some Dongnae pajeon and kick back

Along with the Busan map, there were also other little things added with the recent update. You will now be able to see outlines of your allies through walls. So now you will always know if you have some backup waiting for you in the fray. Ana, Brigitte, Reinhardt, and Widowmaker were all given little tweaks and buffs. There was also a fix that prevents a bug where certain characters can fire their weapon multiple times at once. All of these things will probably come as a relief to any frustrated players affected by these issues.

Load up Overwatch today and give Busan a try. It’s trying some new things with map design. It’ll be interesting to see how the community adapts to this new challenge.