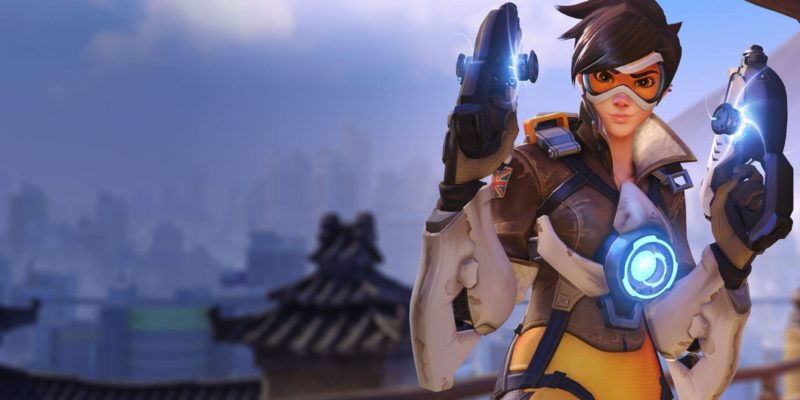 Help. I’ve fallen into a Blizzard hole, and I can’t get out.

Recent Blizzard games have a certain effect on me. They tend to cause a reaction of “Well, it’s okay, but…” and then I can’t stop playing them. I go back to them again and again. The recent Whispers of the Old Gods expansion and introduction of Standard format has led to me playing Hearthstone again for fifteen minutes at a time. I still keep meaning to go back to Heroes of the Storm to try out the new, utterly bizarre, very un-MOBA-like heroes that get added. And now there’s Overwatch.

Overwatch is not like either of those two games. On the surface, that’s a really obvious comment and yes, I know that, please don’t rush to the comments to call me an idiot. Hearthstone is a card game, Heroes of the Storm is a MOBA, and Overwatch is a team-based FPS. Really, though, I mean that while Hearthstone and HotS are free-to-play, Overwatch is not. 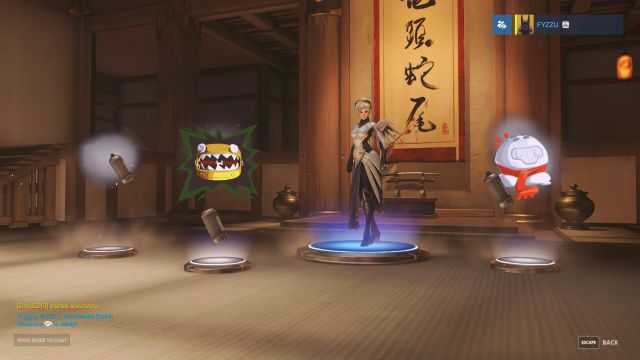 SHINY NEW THINGS! … although most of them are just wall-sprays.

This doesn’t appear to have changed Blizzard’s mentality towards making you play their games over and over again, though, as Overwatch showcases their total mastery of the Skinner Box-style game. Regular profile levelling. Regular unlocks of new sprays, voice lines, and skins. And unlike the aforementioned games, none of this impacts balance because all that stuff is cosmetic. And all of that stuff is strangely more-ish, because – as Diablo has proven – few companies can rival Blizzard for making the collection of random bits of tat satisfying.

Overwatch itself can be rather blithely described as “Blizzard does Team Fortress 2”, with a pinch of inspiration taken from MOBAs. Don’t be fooled by the latter, though: there are a few dozen characters who play completely differently, and they all have “ultimate” abilities that charge up, but those are basically the only MOBA parts present. 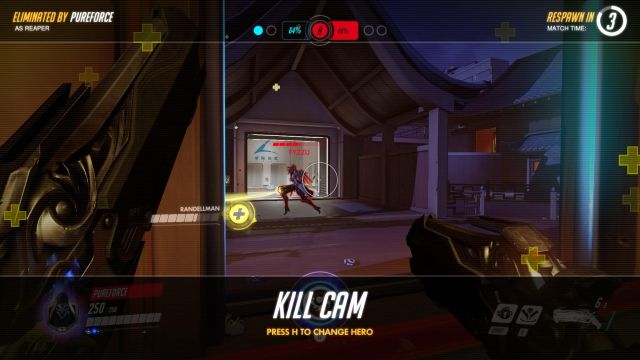 Death automatically brings up a killcam so you can see how you died, although this can thankfully be skipped by hammering the space bar with your fist, like when you’re SHOTGUNNED IN THE FACE BECAUSE YOUR ENTIRE TEAM IS FACING THE OTHER WAY.

No, Overwatch is instead a robust, light-hearted, and entirely solid team-based shooter. Let’s quickly rattle off the comparisons to Team Fortress 2 just to get the sodding things out of the way: two teams face off, and the maps tend to revolve around either one team trying to stay near a cart to get it to a waypoint while the other team tries to stop them, or around both teams fighting for control of a capture point. Some are multi-round, others are single-shot. Some transition from one to the other. Most have a very unique feel, not least because they’re set in a variety of locations around the globe.

Right now, there don’t appear to be any wider-scale maps – nothing along the lines of Capture the Flag or Symmetrical Control Point – but I suspect more modes will be chucked in as time goes on.

You could also argue that it looks a bit Team Fortress 2, which is true insofar as they both have a very Pixar-esque quality to their models and exaggerated animations, but Overwatch goes much further into the cartoon direction. If Team Fortress 2 is a snarkier, more adult-themed Pixar tribute, then Overwatch is firmly rooted in the fun. 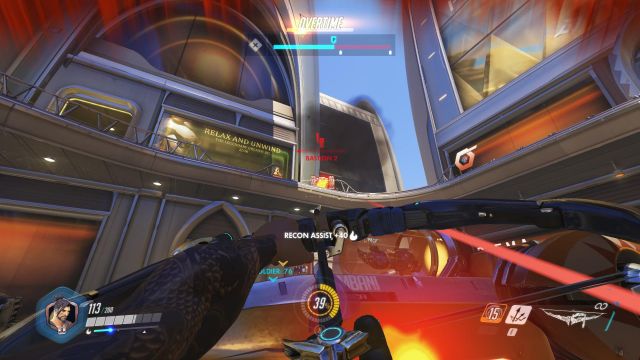 The bright colours and futuristic design – as well as some anachronistic tech choices, like bows and six-shooters – evoke Big Hero 6. Which wasn’t Pixar, but you know what I mean.

Right now, a lot of the fun comes from the sheer diversity of the characters. A few hew closely to established Team Fortress 2 lines: Torbjörn, for instance, functions a lot like TF2‘s Engineer by dropping armour and constructing turrets, although Symmetra uses the Engineer’s teleport construction for her ultimate. The angelic Mercy is a German-accented doctor who can fire out a healing beam, while Widowmaker has a sniper rifle that charges up the longer you stay zoomed in.

Others offer little twists on familiar archetypes. Tracer is probably the closest thing Overwatch has to the Scout, zipping around maps at ludicrous speeds, while Zarya is a Russian lady with a gigantic gun.

That probably has a few of you going “Ooh, those sound a bit familiar”, but these characters have plenty of twists of their own. Tracer, for instance, relies heavily on assessing threats correctly and picking the perfect time to rewind yourself out of certain death. Zarya is focused more on protecting herself and allies than on charging forward with that gun. Mercy’s ability to resurrect allies forces her to play more defensively than you might think. Widowmaker’s grappling hook gives her a swift escape. Etc.

And then there are the characters that don’t really have any parallels, like Roadhog (who’s a lot more like Dota 2‘s Pudge) or Bastion, a robot who can shift into a powerful but stationary gun turret on a whim. And I’ve only briefly touched on eight of the game’s 21 heroes, with each having far more to them than I’ve described here. In short: variety. Lots of it.

Helpfully, the little indicator on the right gives you an idea of what your team is lacking, and this seems to vary based on the map type. It’s a bit less insistent that you need defense heroes when you’re on offense, for instance.

I’m also happy about how nippy it is. In typical Blizzard form it should be pretty well-optimised for anyone with a moderate gaming rig, but I can’t say for sure. I can say that my i7-3820/GTX 970 combination had it running at a constant 60FPS at full whack.

It’s also nippy in gameplay, too. It’s perhaps not quite as quick as Team Fortress 2, but the fast characters are fast, and plenty of characters have some sort of mobility ability. Mercy isn’t the quickest girl, but she can swoop towards teammates in her line of sight, while Japanese archer Hanzo is capable of sprinting up walls. Death can come relatively quickly if you’re playing a fragile character (or get headshotted by Widowmaker, or wind up in a close-quarters deathmatch with someone like Reaper) but it’s perfectly possible to play aggressively and stay alive for extended amounts of time.

Not too many characters regenerate their health, either: most either have to find a health pack or rely on a support class character to help them out if they drop low, although tankier types normally have some sort of regen. Still, even if you die, respawn timers tend to be set to about five seconds, so you can get back in pretty sharp-ish. All of this ties into the levelling up and loot drops to provide that soul-crushing “oh, just one more round” feeling that leaves you playing until 5am. 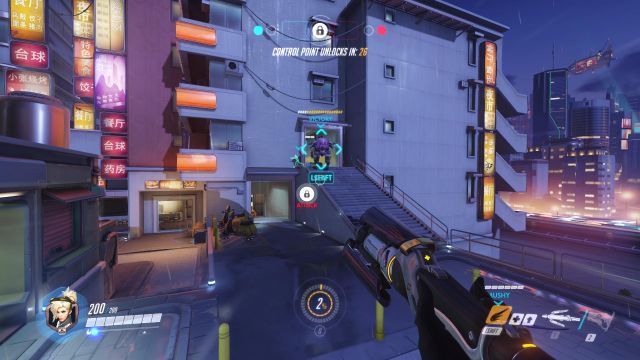 Mercy’s a personal favourite, but don’t expect much in the way of commendations once a match is over. “Kept team members alive nineteen times when they should’ve died, cancelling out 40% of the enemy team’s damage” is apparently not as important as “got five kills in a row.”

I’ve got concerns, mind you. It’s brilliantly polished, but I don’t know if it’s the sort of thing I’d play endlessly, over and over again. The addition of ranked matches, the rule-changing weekly brawls, and a constant flow of new maps and heroes (which Blizzard have proven they can handle with Heroes of the Storm) should help this out.

Matchmaking is a bit iffy right now, with “unable to connect” happening quite a lot. This might be a connection thing with multiple people being “assigned” to the same slot, or it might be indicative of server issues. If the latter, that’s a bit troubling: I was playing before the open beta started, and the load is only going to get heavier at launch. Equally, skill levels are right across the board in most matches (people, please: do not run directly into a sniper’s line of fire five times in a row, and do not all defend a capture point by facing one direction) but that should shake itself out over time if the matchmaking algorithm is any good at all.

Aaaaand then there are microtransactions. I don’t think Blizzard have said anything directly about this (although I haven’t been following it too closely), but there are plenty of hints that microtransactions are a thing that will be happening with Overwatch, despite it being a paid game. There’s an ominous currency marker on the main menu, and the various skin and spray unlocks appear to have a potential “cost” if you don’t unlock them any other way. It’s hard to know if currency will be doled out with daily quests or if it’s going to be purchase only, though, and Blizzard have said that all new maps and heroes will be free, so we can assume this stuff will be limited to cosmetics. 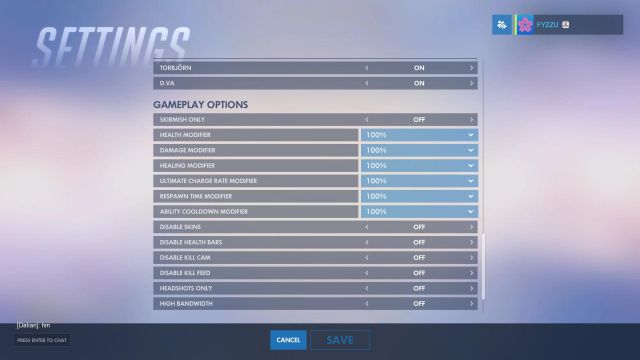 So many glorious options, along with the lovely “one of each hero per team” or “random hero every time you die” settings to stop you from getting four snipers when you’re on offense.

Oh, and I’d love to see a proper server browser. There’s pretty extensive support for custom rulesets and so on through the Custom Game menu, but these can only be played with people by directly inviting them, or filling the slots up with the AI. This makes me sad, because the screenshot above shows that there’s quite a lot of fun stuff you could do with this. I rather doubt this’ll happen, though.

If I haven’t been clear, though, I like Overwatch rather a lot. It’s very reminiscent of Team Fortress 2 back before that started throwing in lots of weapon changes for each of the classes and becoming a bit of a confused, meandering blob. There’s a lot I want to see – with more spacious maps offering up some more open areas, and game modes allowing for less linear progression, being at the top of my list – but I’m perfectly happy to play what’s here. Considering it’s currently free for everyone to try out thanks to an open beta, you should certainly give Overwatch a shot, particularly if you’re one of those feeling a bit disenfranchised by Team Fortress 2‘s changes over the years.

Help. I’ve fallen into a Blizzard hole, but… I’m not sure I’m ready to get out, yet.

By Kevin Carignan7 days ago
News