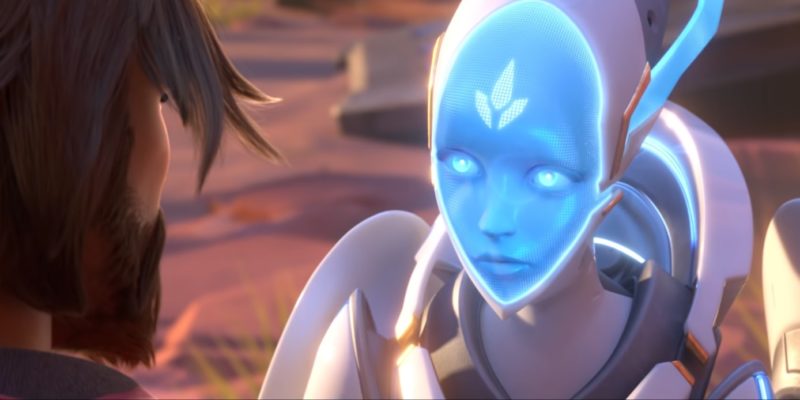 After a few hints and teases, Echo has been revealed as the next playable hero for Overwatch. Blizzard describes her as follows: “An evolutionary robot programmed with a rapidly adapting artificial intelligence, Echo represents the cutting edge of technology.” Echo was already a known character in the Overwatch universe; the question was simply when she’d finally be playable. It seems “soon” is now the answer.

What is known about Echo so far?

From the trailer, we learn Echo is an artificial intelligence made by a scientist that goes by the name of Dr. Mina Liao. Originally part of the team that created omnics, Dr. Liao was recruited by Overwatch when things went south, and she made an AI to help her cause. This was Echo. Her echo. And while we can’t be sure, it does seem like Dr. Liao is no longer alive.

We don’t know anything gameplay-related yet, but Echo’s design screams support. We get an extra good look at her in the “Reunion” short about McCree and Ashe from 2018, and she poses — cutely I might add — as she sits down on her own wings at the end of the announcement video. On top of that, support characters are in the minority, so an extra character in that regard would also be very welcome to balance the classes out a bit more.

From the trailer, Dr. Liao also comes across as a person who wants to make the world a better place — someone who wants to help. If that doesn’t imply that Echo will be Overwatch‘s next support hero, I don’t know what does. Echo is expected to hit the test servers within the next couple of days. When she does, we’ll be there to show you all the goods as usual. Until then, stay tuned to PC Invasion for all updates.

Call of Duty: Warzone: A beginner’s guide to survival