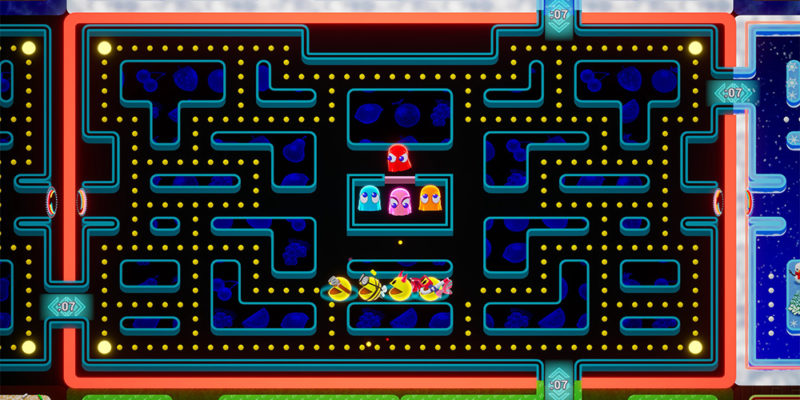 Google Stadia finally has a big exclusive, and it is bringing a familiar face to the proceedings. Bandai Namco has unleashed the hungry monster that is Pac-Man: Mega Tunnel Battle exclusively to the streaming platform, and players can brace themselves for a twist on a classic formula. With the popularity of the battle royale genre, it is no surprise to see other games adopt the mechanic. However, for the iconic yellow fellow, this is on a whole other level.

Taking place over a grid of 64 different mazes, 64 players will battle it out for supremacy. Each individual maze will be connected to other mazes via up to four tunnels. These will open and shut at different intervals. All the while, you are gobbling up pellets and avoiding those nasty ghosts. However, as revealed in October, Pac-Man: Mega Tunnel Battle features unique power-ups. For instance, once you have consumed a power pellet, it is not only the ghosts that should be afraid.

Yes, other players who are unfortunate enough to be in the vicinity without being powered up can now be eaten. Pac-Man has now become a cannibal, and it is a refreshing take on a time-tested formula to say the least. You would think a battle royale in Pac-Man would just have players trying to survive the longest in their own respective mazes. Yet, Pac-Man: Mega Tunnel Battle has turned things up a notch.

Not only do you have to survive your own maze, but you need to balance between keeping safe and going hunting in other mazes. Do you use the ghosts to your advantage and box your opponent in, or do you avoid conflict as much as possible? 63 other Pac-Men await, and you will need your smarts and reflexes if you want to come out on top.

Pac-Man: Mega Tunnel Battle also has a feature that allows viewers to vote on power-ups. These can either help or hinder you, and it will be interesting to see just how far the game will go. Launching on Stadia is one thing, sustaining a player base is another. You can enjoy this latest battle royale via Google Stadia now.

In other Pac-Man news, a crossover is in the works for Tekken 7 Season 4. The yellow man himself is not a playable character, but you can fight it out on a Pac-Man-themed level.