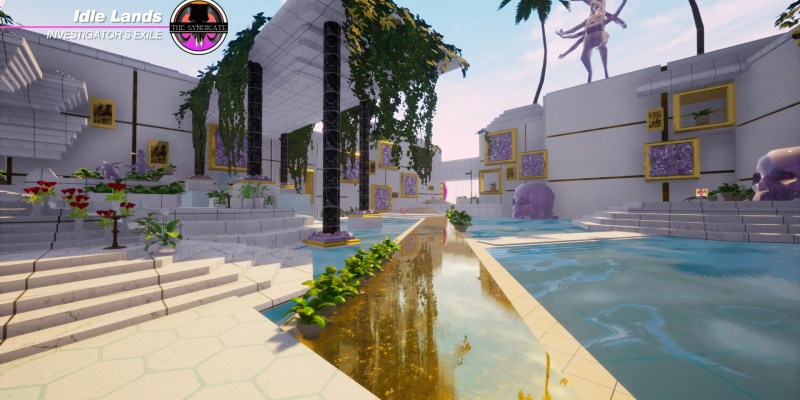 It only takes a few brief glances at Paradise Killer to see where its influences lie. The visual style, character naming conventions, and plot elements are clearly strongly inspired by the works of Goichi Suda (Suda51). However, after playing it, few would confuse Paradise Killer for one of his. The writing is too high quality and the world design too strong. It’s also very reminiscent of the Danganronpa games in certain respects. But make no mistake: this game is unique, persistently intriguing, and well worth the time.

Paradise Killer plants you in the shoes of the investigator known as Lady Love Dies, henceforth referred to as LD. The story seems confusing at first, as it drops you in with hardly any context. Long story short, LD’s society makes new islands every now and again. She gets exiled on island 13 and called back on island 24 when the society’s ruling body is murdered. It’s complicated, okay?

There’s a lot of lore, which the island is practically covered in, and it’s all well-written and totally comprehensible. The writing is excellent, as is the dialogue and overall narrative. The crime itself is solvable as long as you’re paying attention, but it takes a real stickler for detail to really get all the pieces to fall into place. 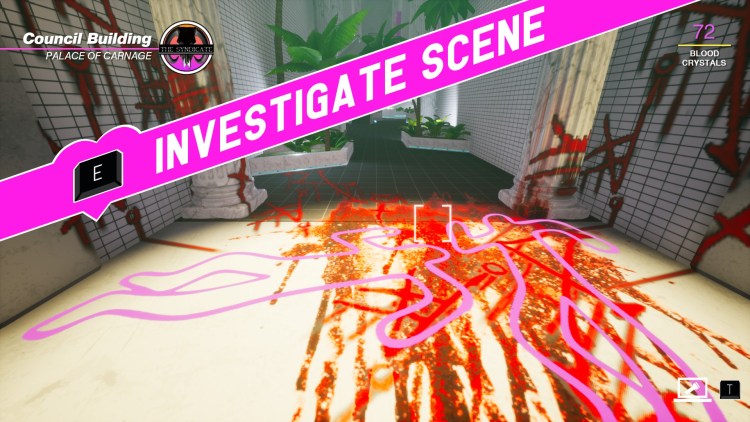 As LD, Paradise Killer gives you free rein of the 24th island as you conduct your investigation. Some direction is given, but not much. At any time, LD can enter an augmented vision mode that tells her where other characters and important objects are located, along with how many meters away they are. Characters also get a red exclamation point above their heads when they have something new to say. Aside from that, though, you’re expected to get a feel for the island yourself.

From the outset, you can go anywhere you want in whatever order you’d like. You can go to the crime scene immediately or you can wait until the end of your investigation. Every new piece of information you get from environmental clues or from talking to people is then added to LD’s laptop, Starlight, which compiles the information in addition to containing a map and a function that allows you to hack mainframes. These mainframes are scattered around, and require specific upgrades that you can find through various means. Each of these upgrades grants you a set of pictures you’ll have to choose from in order to match displayed images, which let you pass security.

The island in Paradise Killer is big, but not daunting. You’ll be totally lost for the first few hours, sure, but once you get your bearings, the place starts to feel natural. The island is made up of a lot of unique, compelling areas that just beg to be explored. And there are lots of things to find all over. You’ll find Blood Crystals, the game’s currency, regularly. You’ll also find a demon to converse with that likes to hang out in tricky spots. There are even side quests that reward you with pointless-but-flavorful collectibles or more Blood Crystals. I absolutely love exploring the open world of Paradise Killer. 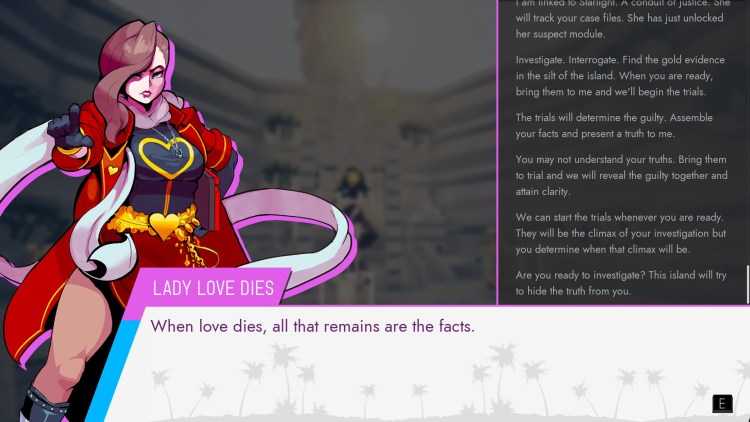 You’ll generally spend your time in Paradise Killer moving between different parts of the island to deal with suspects. They respond to a large amount of new information, and you can even hang out with them to level up your relationship. Many of them will offer you new details as your relationship levels up, too, which makes doing so especially worth it. You’ll save your game via phones and can spend Blood Crystals to unlock them for fast travel. Then you can freely travel between that phone and other unlocked ones, but that also costs Blood Crystals. The game gives you a ton of them if you do a good job of searching the environment, though, so spend them on what you wish.

One of Paradise Killer‘s defining characteristics is that you conclude the game by going to the Judge and starting the trial. You can do this at any point in the game, regardless of how much effort you’ve put into your investigation. But you need evidence in order to make a trial go your way. I put about nine hours into the game before deciding I had enough to prosecute the case. Mostly, I feel like I accomplished what I wanted, but I wasn’t as thorough as I thought I was. I missed a few pieces of evidence that tied certain things together. Even if it’s clear what happened, your evidence needs to be more than purely circumstantial.

However, the nature of the game’s prosecution structure means that information revealed during other parts of the trial won’t need to be repeated. There’s a large amount of logical consistency in the way the trial works. And the way things play out is very much up to you. If you want, you can conceal evidence and change the entire outcome just because you want to. You can even paint misleading pictures. It’s excellently done. 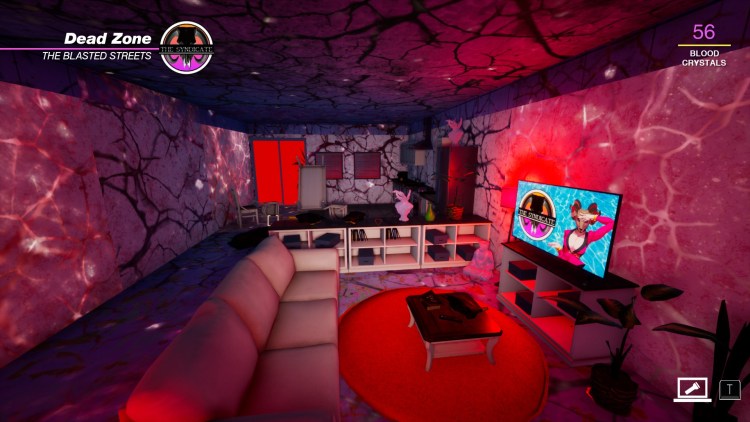 After the trial concludes, you can continue to explore the island and wrap up some loose ends. I wasn’t happy with some things, though, so I made sure to keep a save from before the trial that I plan on going back to. Paradise Killer is a decent-sized game and finding everything is harder than it seems. There are a few mysteries I’m still scratching my head over.

Although it was made by a fairly small team, the game’s visuals are excellent. The island’s environment is suitably otherworldly in spots and mundane in others, but it always feels lived in. The character designs are also very strong, as is the game’s sound design. I also didn’t see a single bug or glitch during my entire playthrough, which is surprising for an open-world game.

Any fans of open adventures or games based around investigation need to check out Paradise Killer. The story is expertly written, the visuals and design are top-notch, and the exploration is some of the most rewarding around. I just wish I could forget the details to have a fresh playthrough again. 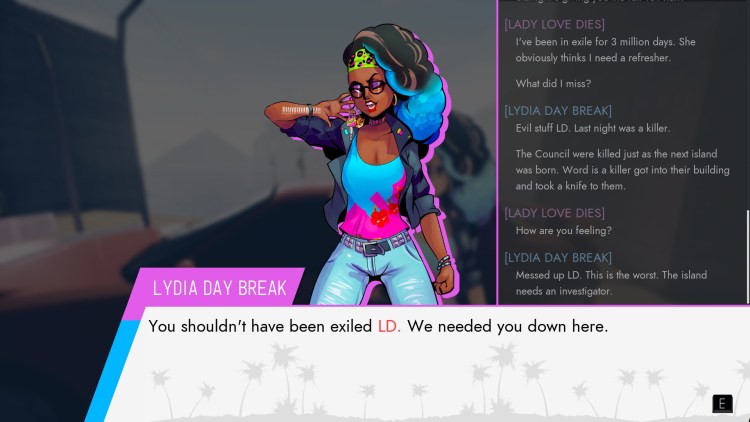 Paradise Killer is an exceptionally enjoyable piece of entertainment. I loved the world and characters and I loved solving the mystery. Anyone who enjoys piecing things together and carefully combing over a digital world for goodies will likely be elated by what's on offer.