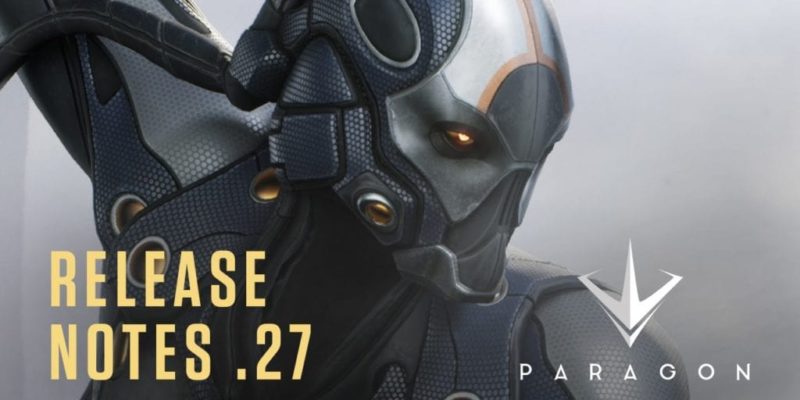 Paragon players need to pay attention because Epic is about to make some huge changes to the game.

The v.27 patch will change the game completely. First up is Draft Mode, a feature that was bound to end up in the game. Players will now enter  a lobby and pick their heroes based on seeing what the opposition has picked. This will become more useful as more and more heroes are added to the game. Epic say this is being added now to “eliminate long matchmaking queue times” which can be quite painful.

The update will bring some major hero balancing, especially for casters who will find the range of their abilities has been increased which means they can keep their distance. Most importantly, all heroes have had their passive abilities removed and even basic attacks no longer need to be levelled up. Apparently Epic felt that passive abilities and basic attack leveling “did not provide as much depth or strategic value”. Card point distribution is also changing, especially in the jungle where only the last hitter will receive card points (CP). These changes have been made to discourage players grouping in large packs and stomp around the map ganking. However, this may cause problems with players becoming reluctant to help their teammates if there are already two players in combat.

A major change that I don’t think is a positive move by Epic, is the removal of Inhibitor regeneration. Currently, Inhibitors (final tower) will respawn after a certain amount of time. In .27, these will no longer respawn. The good thing about the current system is it encourages a team to attack before the towers come back, and it brings some strategy to the attack as a team attempts to quickly take down the other Inhibitors. This will now be lost even though they have buffed Inhibitors from  3500 to 4000.

There is a way to add back some of the gameplay to this feature by grabbing the Orb Prime, taking it to your capture point which will bring all inhibitors back immediately.

Finally, and I’m not sure how I feel about this, Kallari has been given a complete makeover which will make her even more deadly. Kallari will be able to remain in stealth indefinitely until she attacks a target, Blood Dagger has been renamed to Crippling Dagger and now makes the target slow instead of bleed. Her ultimate Death Sentence now reveals all enemy heroes to Khallari and she can pick a target, teleport directly to them and deal damage. Is she going to end up OP? We’ll have to wait and see but she’s becomes a lot deadlier.

It’s hard to tell how all these changes will affect the game when playing against experienced players but I’ll admit there are a few things here that raise some concerns.

The video below shows most of these changes in action and there’s notes below that as well as a blog update from Epic. These changes fundamentally change the way the Paragon plays.

Finally, there is a new hero coming called Khaimera who is a powerful melee fighter and Paragon’s first duelist design to disrupt team fights. He comes with dual axes, has a pounce leap, stacks health regen with basic attacks and his ultimahte is called Cull.You can see him below in the video. He launches into the game on 21 June.

Call of Cthulhu’s E3 trailer may drive you mad