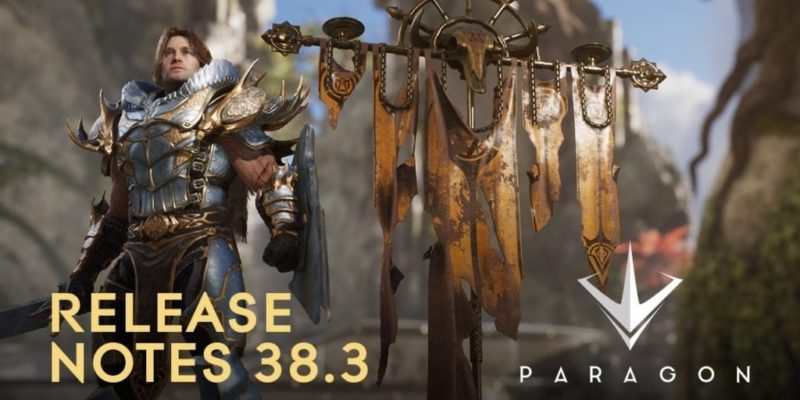 Paragon v.38.3 will launch on Tuesday along with the new hero Yin and it’s a big one.

Not only is the new hero arriving but on the game’s first anniversary, 20 heroes have been rebalanced. As far as new features are concerned, banners are finally here which will show on player and tower kills. These banners will be going up for sale one at time as Epic decide which the community prefers.

New cards are being added  and existing cards are being updated as part of the card system rework that’s going on at Epic/ The existing updated cards will according to Epic, “reflect our general direction for the future”, and there are, “reworks some of the more niche cards with more impactful passives or actives and changes the numbers for other existing cards”.

As a thanks to all players and to celebrate one year of Paragon, all players who login this week will get one of six skins as a gift and Founders will be getting an “additional gift”.

An interesting point in the notes, which is not really explained, is that “heroes are now unlocked through daily logins” and we assume that means that at some point heroes will go into some kind of rotation as we see in other MOBAs.

As far as major changes to heroes is concerned, it looks like Aurora is being nerfed which is no huge surprise, Gadget is getting a boost in places along with a few skill changes to Speed Gate and Tesla Dome, Iggy & Scorch is finally being buffed, Howitzer is getting a well-deserved nerf, Rampage is nerfed, Serath gets a welcome boost, Sparrow is nerfed, and more.

This is a major update for the game and all players should check their decks and heroes changes carefully. Tuesday is going to be an interesting day in Paragon and overall these changes look good.

Check the next page for all the patch notes.

By Matthew Loffhagen42 mins ago
News