Path Of Exile: Legion – What’s In A Name?

If there’s one thing the Path of Exile community loves, it’s guessing what the next challenge league’s name would be. Yes, some people have correctly guessed that the next expansion will be called Legion. So what exactly does that mean?

Well, in Path of Exile: Legion, your hero will end up facing off against ancient foes, namely faction generals and their armies. You might’ve heard of some of these factions such as the Vaal.

When you enter areas, you’ll spot a monolith that can be activated. Each monolith you encounter in Legion serves as the highlight of the area. This will spawn two armies locked just before a clash. Using your attacks, you can hit the various mobs around you, and, after roughly eight seconds, every “tagged” enemy will come to life for you to fight.

The difficulty is dependent on your choice. You can tag only a handful of enemies, or you can tag as many as you want. The more enemies you tag then the higher the difficulty, and, of course, the better the loot.

There are five legions in total, and you might even get the chance to fight all of them… at the same time. To do that, you’ll first have to acquire legion-specific splinters. For instance, if you’re facing off against monsters from the Maraketh legion, they’ll have a chance to drop Maraketh splinters. Collect 50 of these and you can obtain a Maraketh Emblem.

Path of Exile’s endgame revolves around the map device, and Legion is no different. Its map device will allow you to place the legion’s emblem, kickstarting a battle against that entire legion’s army. That’s an unforgiving number of mobs, along with their general.

If you do want to ramp up the challenge, you can collect multiple legion emblems to face multiple legions at the same time. Traditionally, the map device only has four slots, but, in Legion, completing the battle against four armies has a chance to grant a map device with five slots!

What’ll you do with a five-slot map device? Well, you’ll place five legion emblems for all five legions, facing all the armies in one big fight. It’s going to be absolute mayhem when that happens, but the rewards might certainly be worth it. 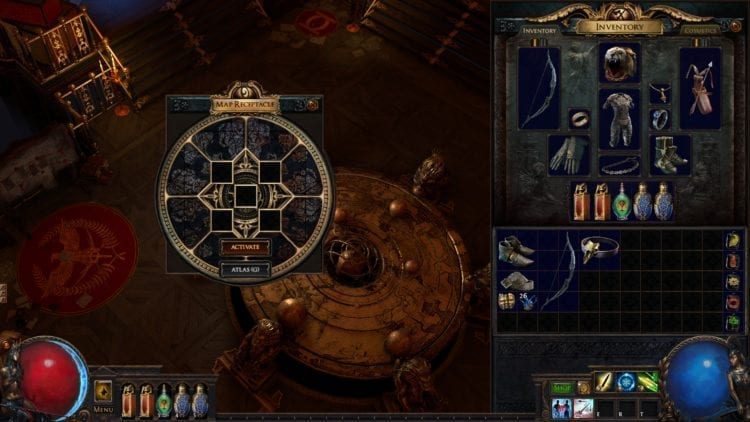 It’s going to be a problem if the challenge doesn’t lead to anything rewarding, right? Thankfully, Path of Exile’s Legion expansion has a slew of new items and uniques that you can obtain.

An intriguing addition would be “incubation items” which modify a piece of gear to drop a specific item upon completing the tally. For instance, the Blacksmith Incubator item drops a random unique weapon. If you apply it to, say, one of your scepters, it starts tracking the number of monsters you’ve killed. At 2,000 kills, a random unique weapon will drop for you.

You can place incubation items for every piece of gear you have, and all you need to do is rack up the kills and complete the requirements. Random rewards include weapons, armor, divination cards, high-end currency. Yes, there’s also a super-rare chance to get the Mirror of Kalandra if you’ve got the high-end currency incubation active.

A couple of uniques you can expect in Path of Exile: Legion.

Aukuna’s Will – A new unique glove that lets you raise zombies without the need for corpses, however, these summoned zombies also count as corpses themselves. Some tricky playstyles include summoning a horde of zombies out of thin air and then casting Raise Spectre to turn them into ghostly figures.

Voll’s Protector – An older unique item which is one of those that received some tweaks. Its new perk, Inner Conviction, lets you gain power charges instead of frenzy charges, and power charges will have a stronger spell damage boost. Note that existing uniques you own, in case you’re playing on standard, will not have this change retroactively applied unless they dropped while playing Legion.

The expansion will also add unique jewels from each civilization. These are extremely hard to get and quite rare, but they offer amazing changes to your passives tree. For instance, the Vaal jewel can change surrounding passives to corrupted versions. If the previous passive was Fervor (+1 maximum frenzy charge), it can change to Flesh Worship (+maximum life, +life leech). 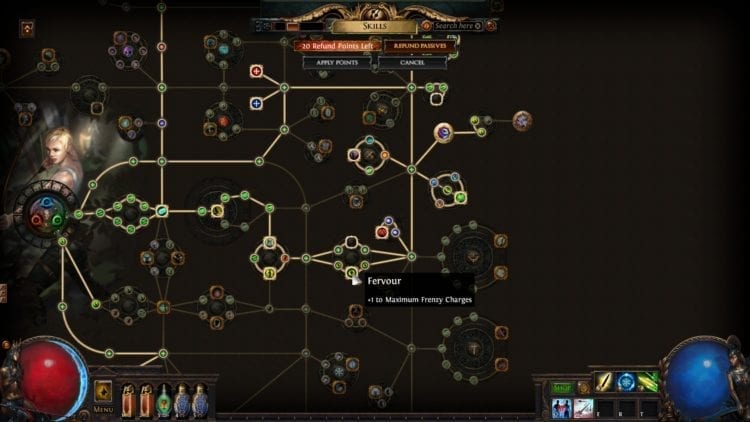 Every jewel can end up scrambling your passives tree a certain way. The clue is a particular “seed number” when you read the jewel’s description. It would say something along the lines of: “A battle occurred in year <X>,” where X is the seed number itself. Each seed has different effects for particular sections of the passives tree. I’ve been told that there are thousands of possible results, and you’ll just have to trade to get the type of effects/seed number that you want. 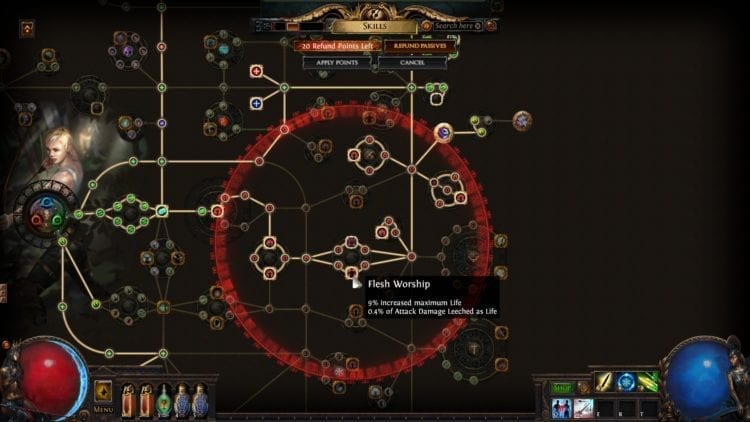 Path of Exile’s Legion expansion will have loads of improvements for melee combat, including the following:

A couple of archetypes (suggested build styles) are being introduced:

The “Blood and Sand Gladiator” is a Duelist build that uses the Blood Stance and Sand Stance (from a new skill). The former can do massive damage to multiple enemies up close, and the latter is more defensive in nature.

The “Rage Berserker,” meanwhile, lets you generate rage using certain attacks such as Chain Strike, increasing your attack damage and movement speed. In Legion, rage no longer depletes health over time, though the Berserker can choose to restore that effect in exchange for increased power.

There are some improvements to Path of Exile’s mobs and bosses. There are a number of changes to some of the early-game bosses, including the “tell” or the wind-up before their devastating attacks.

Path of Exile: Legion will also see the improvements for eight Atlas maps. The specific focus is on making boss fights better. Among the changes are some pathing and layout improvements, and a complete overhaul to the Coward’s Trial unique map.

You don’t have to wait long to experience Path of Exile: Legion. The expansion will be available for PC players on June 7. Xbox One and PlayStation 4 players will just have to wait a bit until June 10.

Oh, and if you’re from Korea, you need not worry because the game will be available in your country alongside the expansion’s PC launch on June 7 as well. Grinding Gear Games have partnered with Kakao Games to provide Korean servers, Korean customer support, and a full translation. This version of Path of Exile will still be similar to the international servers, so no drastic changes to content or mechanics are expected.

Finally, fans of the game might want to check out ExileCon 2019, the first-ever Path of Exile convention. It will take place in Auckland, New Zealand, from November 16-17. I’ve been told that special guests will be part of the show: Max Schaefer, Eric Schaefer, and David Brevik, the brains behind the classic Diablo games.

There’s bound to be a lot in store for Path of Exile: Legion and future content, including the highly anticipated 4.0 mega-expansion. I asked Grinding Gear Games’ Chris Wilson a few questions on what to expect, as well as how the team handled problems with existing content. You can check out the interview here.

By Jamie Sharp16 hours ago
Features

By Ben Simmons16 hours ago
Previews

By Tim McDonald22 hours ago
Previews