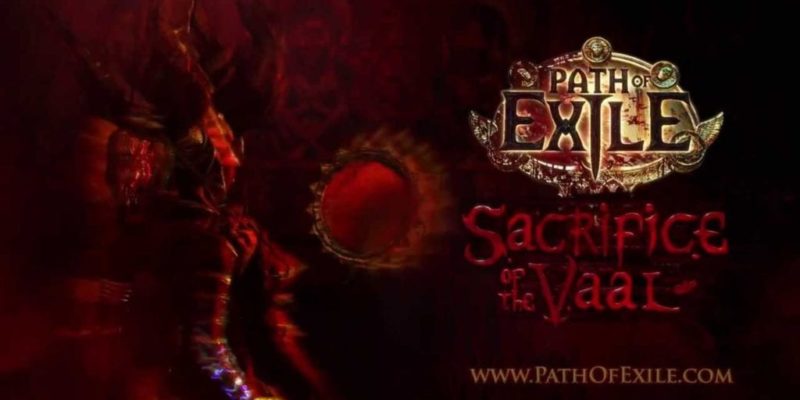 Grinding Gear Games has been busy teasing their upcoming Path of Exile mini expansion Sacrifice of the Vaal for a few weeks now and today we have all the details on what to expect on 5 March when it launches. There’s also a new trailer too.

As we’ve mentioned in previous posts, this content update introduces the new villain Queen Atziri who plunged the Vaal civilisation into a “dark age” as she sacrificed her followers in the pursuit of eternal beauty. Like all good ARPG villains she’s returned and this time she’s on her way back from her realm to Wraeclast spreading her corruption across the land.

Players will be sent on a series of quests to collect fragments which will eventually unlock Atziri’s lair. These fragments are combined in the map device which opens up six portals to the Apex of Sacrifice. Expect deadly bosses along the way. These new areas are is designed for high level characters so expect it to be a tough journey.

Atziri’s corruption of Wraeclast is something that’s real and visible in the world via Vaal-influenced secret areas which will have to be found by players. They are visible thanks to a red beating heart and ribbons of blood. Not something you’ll miss if you stumble across one.

These new areas work like end-game maps increasing in difficulty and come with their very own new boss to battle. Once the boss is defeated, a chest can be opened to reveal either a Vaal Skill Gem or Vaal Fragment.

The new skill gems available to players are “ultimate versions” of original skills and these can charge up as you wade trough the enemy. Expect some stunning effects and powerful attacks.

Moving on to items and this is where the Vaal Orbs come in to play. These orbs can corrupt pieces of equipment to make them more powerful, sometimes with unpredictable results. There is however a caveat to augmenting items with orbs. Once you have applied a Vaal Orb to items they can not be modified further. Different effects also apply to the different items types. Corruption is also the only way to obtain white sockets, certain implicit mods, gems with level or quality higher than 20, maps with eight mods and other “states”.

Competative gameplay is also something GGG has been focusing on and there’s new Challenge Leagues, in particular the new Ambish League and hardcore Invasion Leagues each with eight challenges. Anyone who completes all the challenges will get their hands on an exclusive t-shirt courtesy of GGG.

The Ambusg League adds new Strongboxes that are guarded by mobs which have to be killed before the box can be acquired. Strongboxes can also have mod prefixes which will determine their difficulty while suffixes on these boxes will improve the quality of the rewards.

The Invasion Leagues has been designed to “kill players” say GGG. Players will encounter mobs from the game’s different acts with a unique boss on each level. The further in you get, the harder it becomes. With 60 new bossed added to the game there’s going to be a lot to cope with.

PvP is being souped-up with the new Sarn Arena which is a free for all PvP area where up to 12 players can do battle. Cut Throat is an optional league type where players can invade other player’s areas and take them down to loot their items. GGG say they will “iterate the rules” for this with the community”.

It sounds like this mini-expansion will really expand the game, and while there is no new act as yet, there’s plenty to enjoy in the month ahead.

Keep an eye on the Path of Exile site for further updates as we head toward launch.