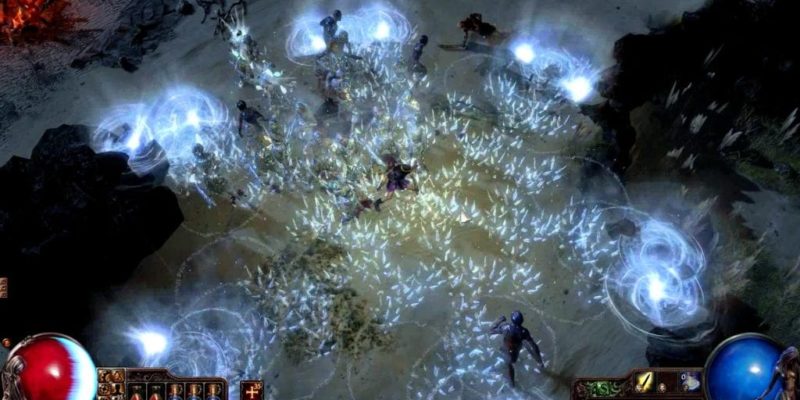 Hey folks, not long now until Path of Exile’s Sacrifice of the Vaal mini-expansion is out. Currently on the clock we have 5hrs and 12 minutes left, so to help ease the wait whilst we’re all working, Chris Wilson, Managing Director of Grinding Gear Games, kindly answered some questions whilst preparing for patch 1.1.0 deployment.

IncGamers: Firstly, are your servers ready for the huge influx of players :)?

Chris Wilson: Yep! We have a good idea what to expect from the previous public release (Open Beta last January, full Release in October, etc).

What are you most excited about so far from the development of Sacrifice of the Vaal (SotV)?

Chris Wilson: I’m most excited about the special craftable chests in the Ambush league. It’s an idea I proposed over a year ago, but we needed to find the right place to introduce it. It was very easy to slot it into these four-month leagues once we had development resources to work on it.

What have you learned from the development of SotV so far?

Chris Wilson: We’ve learned that it’s both easy and fun to put together a very cohesive Path of Exile mini-expansion themed around Sacrifice and Corruption. We have many ideas for future mini-expansion themes and are really looking forward to selecting from them for the next one.

Could you tell us more about the Vaal civilizations history and the creation of their own skill gems?

Chris Wilson: The Vaal civilisation existed around two thousand years before our players were exiled to Wraeclast. In a quest for eternal youth, their queen managed to destroy her people in an apocalypse that she caused.

Vaal Skill Gems are much more primal and brutal than the refined ones that contemporary exiles use. Powered by the sacrifice of enemies, the Vaal versions have much larger abilities but require a requisite amount of slaughter for each use.

With Vaal pact now reducing your leech by 60%, could you explain the design decision behind that change, how will the passive work with current builds that use it?

Chris Wilson: This keystone passive used to disable your life regeneration and flasks, while letting you leech instantly. This proved to be too powerful, especially when combined with other keystone passives.

When we reduced its leech (to a value that is still very good because of its instant nature), we deemed it appropriate to restore flask usage to those builds. Current builds that use the passive will find their leech reduced, but are able to use flasks again.

There are many new powerful tools in Sacrifice of the Vaal for them to use to further improve their characters.

Any cool builds your team could share with the new corrupted skill gems?

Chris Wilson: We’ve decided not to spoil the process of players finding their own awesome builds, sorry! :-).

Chris Wilson: I’m a big fan of Vaal Detonate Dead and the Desecrate Skill. Desecrate lets you summon corpses that you can later revive with your summoning skills. However, if you stack up a big pile of corpses, you can chain-detonate them with Vaal Detonate Dead. This combo caused us to consider a few changes to how certain boss fights work :).

Awesome. If you can say, what do the corrupted versions of Spectral Throw and Shield Charge do?

Chris Wilson: Vaal Spectral Throw causes you to throw your weapon outwards in a spiral. It’s possible to charge up multiple uses of this skill and unleash them in rapid succession. Works best with hammers, in my opinion. There’s no corrupted version of Shield Charge yet, but we’re planning to augment the 17 Vaal Skills in 1.1.0 in the followup patches (a couple of skills every 2-3 weeks).

Any ideas that haven’t made it into Sacrifice of the Vaal because of the bigger expansion and possible Act 4?

Chris Wilson: We managed to pack everything we wanted into SotV! Act 4 and its associated large expansion are in the works, but we have at least one more mini-expansion before they’re ready.

Anything you’d like to say to your fans before the release of SotV?

Chris Wilson: I’d like to thank the fans for their amazing support, great feedback and inspirational level of creativity they show with character builds. Thanks!

Special thanks to Chris and his team for providing those answers on short notice. With only a few hours remaining, Chris has acknowledged the 1.1.0 skill tree for the Offline Skill Tree Calculator on Reddit is legit but already out of date, so any info gleaned from the screenshots around the web and those below may not be final.

From the 1.1.0 patch notes, the Marauder’s starting area has been redone significantly, from new merged weapon passives to that lovely bunch of resistance nodes have now been changed. Spell damage starting nodes for the Shadow have increased to the same as the Witch and +12% to health has been added to the mana passive node just to the right of Lord of the Dead, making for a more refined skill tree.

As with previous big updates, everyone’s is getting a passive reset and with that in mind, what are you thinking of combining with the known corrupted skill gems right now? Further info on changes can be found over on Grinding Gear Games website.

By Andrew Farrell2 days ago
Interviews