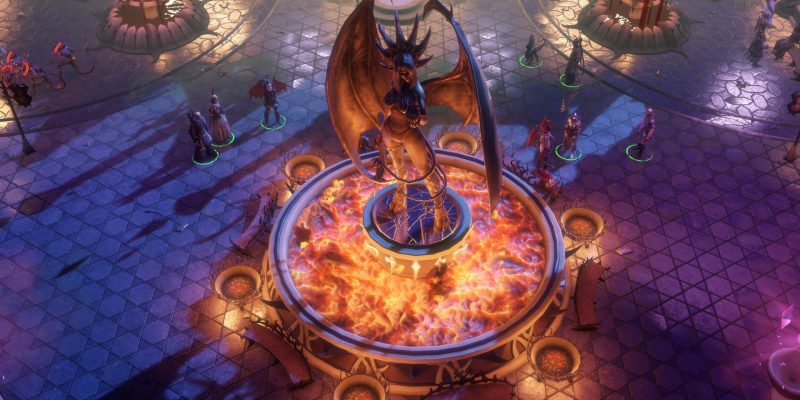 Before we get into the nuts and bolts of this Pathfinder: Wrath of the Righteous preview, indulge me for a moment as I talk about its predecessor, Kingmaker. It’s great. I put off playing it for way too long, but it was a lovely homage to the real-time-with-pause CRPGs that Black Isle and BioWare used to do.

Being based on the tabletop system that shares its name, it was also fucking complicated. Because of its love of multi-classing, and dipping into different classes just to get useful feats, levelling up practically required me to keep a spreadsheet open. Yes, I want to dip into Alchemist Vivisectionist just to get that one ability, and also put a level into Monk for that other one. I should also really plan ahead for level 10 because that’s when oh no my brain is leaking out of my ears. Wrath of the Righteous has some welcome changes, but don’t worry: if you want to min-max the shit out of your characters, you can still do that.

Pathfinder: Wrath of the Righteous

Like Kingmaker, Wrath of the Righteous is an adaptation of a published Adventure Path (a campaign, basically) for the tabletop game. But where Kingmaker had you reclaiming the Stolen Lands and starting up a barony, Wrath shoves you headfirst into a demon invasion, gives you superpowers via Mythic Paths, and has you take control of the crusade to battle them back.

I asked creative director Alexander Mishulin why Owlcat Games had specifically decided to adapt Wrath of the Righteous. “Adventure Paths have to have certain qualities to suit a CRPG better,” he explained. “It should contain a rather sandbox-y part. In those parts, it’s easier for us to provide the players with more choices and more options.”

“Another thing that we really like in our games is a strategic layer. It allows us not only to give you something else to do, but also allows us to immerse you deeper into the story and the world. For you to feel responsible for growing your nation, or responsible for crucial choices and building the army against the whole army of demons.” I should point out that while this is a shiny new beta version that goes up through the game’s fourth chapter, this was my first time with Wrath of the Righteous. As such, I have not gone through chapter four. I have not taken charge of the crusade and led it against the demon hordes. Regrettably, this also means I have not experimented with the new mount system or mounted combat, so I can’t tell you if I can use Enlarge and Reduce spells in order to ride a particularly feisty housecat into battle. I can at least say you can ride a dinosaur into battle, though, so that’s something. Mounts can also be equipped with armor and barding, and most animal companions will have a degree of levelling and feats of their own.

However, I have gone through chapter one twice, because I wanted to test out a few thoughts and theories and see how much impact decisions had. The answer, as it turns out, is “quite a lot.” Let me give you an example.

At one point in the first chapter, I came across a particularly zealous paladin about to put a cleric to the sword. Without going into too much detail, some from his temple had decided to take actions that, out of context, would look rather suspicious. The paladin had decided this meant they were all evil cultists and had to pay. My choices? Well, talking them down wasn’t an option (and believe me, I tried). Attempting conversation mostly just led to the cleric being immediately cut down, and then the paladin being suspicious of me. I could then use my Angel powers — one of the Mythic Paths available, which we’ll go into in a bit — to convince him that I was on the side of All That Was Good And Right or whatever, and then recruit him to the struggling crusade. Or I could just murder him for the sake of that poor cleric.

Alternatively, I could attack him right off the bat in an attempt to save the cleric. That is a tricky proposition, though, because taking down him and his cronies before they manage to butcher a single spellcaster is a tall order. A judicious application of the Grease spell to make everybody fall over helped, though, because it’s a lot harder for people to do a murder when they’re lying on the ground and I’m stabbing them. This gave me the opportunity to talk to the cleric and recruit him and his temple to the crusade instead.

And then came my second playthrough where I visited them earlier and discovered that, the first time, I was actually too late. Get there sooner and their confrontation hasn’t happened yet, meaning you still have time to defuse the situation. Of course, that meant I hadn’t done certain other bits, which caused some problems on its own. Decisions! Replayability! Interesting expansions on the world! Gosh. Alas, my chapter one focus means I haven’t spent much time with the Mythic Paths. Depending on which of the nine paths you lean into, you wind up with a variety of different powers — and it very much changes the world. A crusade led by someone angelically powered is going to be a bit different than one run by a demon, and the lawful good paladin in your party might not appreciate the latter. Personally, I’m looking forward to the Swarm-That-Walks, because who doesn’t want to be a horrifying mass of devouring insects in the shape of a person?

Naturally, these powers impact your character growth. Along the path of the Azata, you’ll get a pet dragon. It’ll talk, it’ll have opinions, and — being a living creature — it’ll grow. But the paths themselves aren’t limited to particular classes. A Lich is a powerful spellcaster, so if you’re a wizard, the benefits are obvious. But if you’re a front-line fighter, you still get advantages. Your attacks might drain health from enemies, and you can always summon the undead to aid you. You’re not locked out of paths because your class doesn’t suit.

The paths don’t replace or impact your regular levelling, either: they level up independently as you progress through the story, rather than as you gain experience. I have no idea where this is, but it looks pretty.

Some of the other changes with Wrath of the Righteous are very, very welcome. The tutorial is a lot better than Kingmaker‘s, and the automatic levelling up of your companions already seems a bit more sane than the occasionally questionable tracks that were in Kingmaker. Rather than the fixed-perspective isometric nature of Kingmaker, Wrath of the Righteous is in full spinny 3D, with a freely rotatable camera. I’m a little more torn on this decision: while it’s nice to be able to examine areas from all sorts of angles, it’s a lot easier to get lost in the burning city streets, and the camera is more likely to obscure things. Being able to turn the camera means you have to turn the camera.

Still, it allows for Wrath to have a more cinematic nature. While Kingmaker opened with you fending off assassins and then campaigning against bandits, Wrath opens with a literal demon apocalypse hitting the city you’re in. Within the first 10 minutes, there’s an in-engine cinematic of a demon lord battling a dragon. It starts big, and it continues that way.

The end is nigh Companions, too, are much improved. There are still a few boring sods in there, but there are a number I want to learn more about — an elf who is very suspiciously wearing a necklace that conceals alignment, for instance. For me, though, the star of the show is Wenduag, a corrupted denizen of the underground who’ll swear loyalty to the strongest. She’s far, far more interesting than I first thought, and I’ve been enjoying having her around. Indeed, most everything has had improvements in some way. The turn-based combat, in particular, seems less slow and clunky than the version put into Kingmaker via a post-launch patch.

So yes. I haven’t gone that far into Pathfinder: Wrath of the Righteous, but I’m greatly impressed with what I’ve played. It’s a bit more linear and a bit more character-driven (especially with your protagonist appearing to be a Chosen One type, what with the Mythic Paths,) but Owlcat Games has so far done a solid job of keeping the complexity while also opening the doors a touch wider for newcomers. Wrath is a full-on CRPG with all the stats and dice rolls you could hope for, and I really want to go back to playing it right now. What more do you need to know?

Apex Legends leak suggests a Revenant Heirloom is in the works