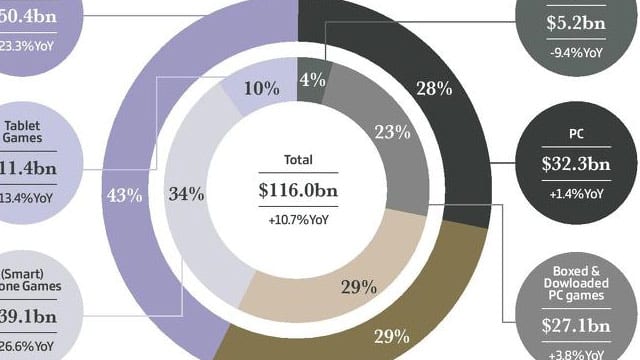 It wasn’t that long ago there were cries of PC gaming is dead, mainly from the console community, but it’s now more alive than ever.

After some number crunching by GI alongside analysts, it shows that PC Gaming is growing and is on the verge of surpassing console sales. PC sales are now a mere 1% behind consoles at 28% with consoles at 29%. That’s a 1.4% increase for the PC year on year.

The growth of PC game sales can be partially attributed to the choice of digital retailers. Steam has done a heck of a lot for the PC, and so has GOG for old and new releases. There was a time when publishers would ignore the PC platform with select releases but over time we’ve seen fewer console exclusives and more day one PC releases. Publishers will go where there’s money and the growth of the PC market has made them sit up and take notice. It’s taken time to get there but it’s happening.

A lot of the data gathered in this report is UK-centric and the PC has a long way to go to catch up with the consoles in the UK market. The UK has always been heavily console focused for well over a decade so it’s no huge surprise to see that only 1.3% of game sales are for the PC compared to 81.8% for the Xbox One and PS4. With most PC gamers buying games digitally, these numbers are not surprising as we are assuming the Chart Trak data used is for boxed sales. The global market for PC games at least matches the console as mentioned above.

All this is great for PC gamers because now we have more games to choose from than ever before. Admittedly, some of them are terrible cheap budget releases on Steam. There is a downside to this growth in that there’s only so many games you can play but at least there is a huge selection to choose from that are easily accessible digitally.

The bottom line is, PC gaming is not going anywhere and the “PC Gaming is dead” comments have no foundation in fact. Vive le PC.