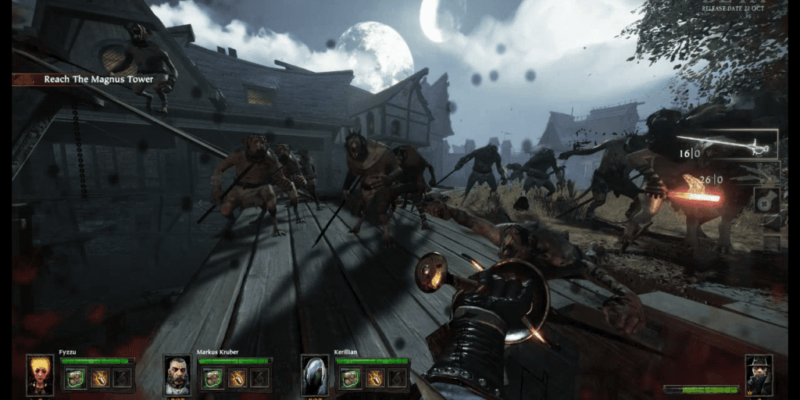 There are only two people at PC Invasion bold enough to face down a horde of rats with little more than medieval weaponry and fireballs, but they were busy so Tim and I had a go at Warhammer: End Times Vermintide instead.

Aided by two semi-competent bots, we embark on the very first level of the game (or the first level in the closed beta, anyway) on easy mode. Much to Tim’s disappointment one of our travelling companions turns out to be an elf, which sparks some outrageous bursts of anti-elf sentiment. Apologies to all pro-elf viewers in advance.

Vermintide is a Left 4 Dead-esque (at times very Left 4 Dead-esque) title, wherein similar co-op rules apply. Don’t stray too far from the group. Stick together. Watch each other’s backs. I think I manage to break all three of those rules, like a great big idiot.

Still, if you want to see some rat-slicing melee action, plenty of fireballs courtesy of Tim’s Bright Wizard character, and a collection of Skaven foes from Gutter Runners to Rat Ogres, then settle in for just under half an hour of precisely that.

Vermintide is due for release on 23 October, so it’s unlikely to change a huge amount from what’s shown in our little recording session.

Lords of the Fallen Complete Edition Comes to North America