If you’re wondering about Episode 3, we’re counting the E3 broadcast as that one. Hopefully that doesn’t mess up anybody’s playlists too much.

For a summary of what’s in Episode 4, keep reading beyond the podcast widget. If you just want to get right to listening to the podcast (or download it for later,) you can do so below. Prior PC Invasion Podcasts are to be found in our archives.

First of all, this picture will become relevant early on in the show. Study it. Remember it. 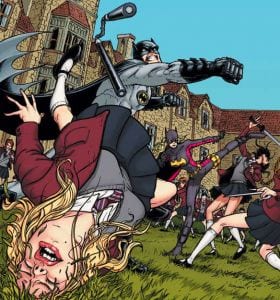 Yes, we begin this week by talking about Batman: Arkham Knight and utterly wonderful job done on the PC port. Who needs smooth frame-rates above 30 or the ability to switch off things like motion blur anyway, huh? That’s so entitled.

In a post-E3 week not exactly resplendent with news, we also talk about the rather early Project Cars 2 announcement.

Then it’s on to talking about recent gaming exploits. Tim bought Assassin’s Creed: Unity for reasons best known to himself, and also made the more sensible purchase of Dark Souls 2: Scholar of the First Sin.

Meanwhile, I’ve been playing a closed beta version of Might & Magic Heroes VII (when it isn’t crashing,) while Paul’s been romping through Path of Exile’s latest (and fourth) Act.

Plus some bits at the end about VR too.