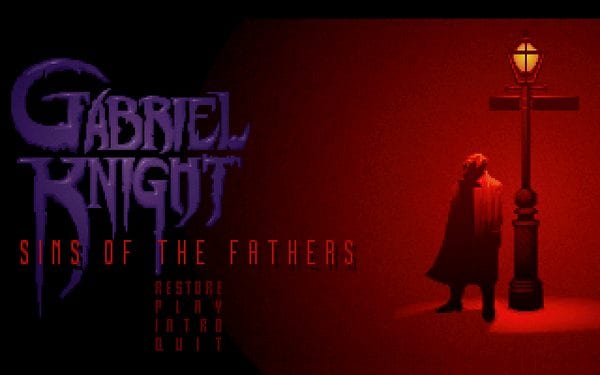 – Jane Jensen is the famous adventure game developer behind the critically acclaimed Gabriel Knight series. She has now begun a kickstarter project so she can fund a new adventure games called Moebius. Here’s what the game is all about according to the project site:

Story:  Malachi Rector is an antiquities dealer who hunts down artifacts all over the world.  After losing everything in a fire, he’s hired by a Manhattan millionaire to investigate a series of events and document them in his meticulous way.  But Rector soon realizes that the events hold a bizarre significance, as does his own existence.  This is a metaphysical thriller ala Dante’s Equation and Gabriel Knight.

Art Style & Mechanic:  2D, graphic novel look and feel (like an updated GK1).  It will be a 3rd person adventure game with a point-and-click mechanic and lots of sophisticated puzzles.

The Two Guys from Andromeda

-After a 20-year hiatus from the games industry, Space Quest series creators Mark Crowe and Scott Murphy are back, and they’re assembling a development team in the hopes of creating a new space-themed adventure game.

Little has been revealed regarding the pair’s new game, but further announcements will follow “in the very near near future.”

“We have some real… stuff to share, incorporating that same style of comedy, wonder and excellence you expect from a Two Guys adventure,” Crowe and Murphy note. “We have a LOT we need to get off our corrugated calcium chests and out of our titanium-baffled brain pouches.”

The pair adds: “The way games are made and gotten into a player’s home has changed greatly, and you have never stopped talking about the adventure game genre and how much you’ve missed it. We are adapting to the changes, taking advantage of them and charting our own course through space and looking forward to finding that ‘new game smell.'”

-Superbrothers is already a legendary game in the indie scene, making waves when it first debuted on iOS systems. Now, anyone who missed it the first time around can purchase it on Steam for the PC. For $6 you can play one of the best indie adventure/exploration games of recent years.

You can check the game out over here.

Borderlands 2 [Interview] – The making of a role-playing shooter