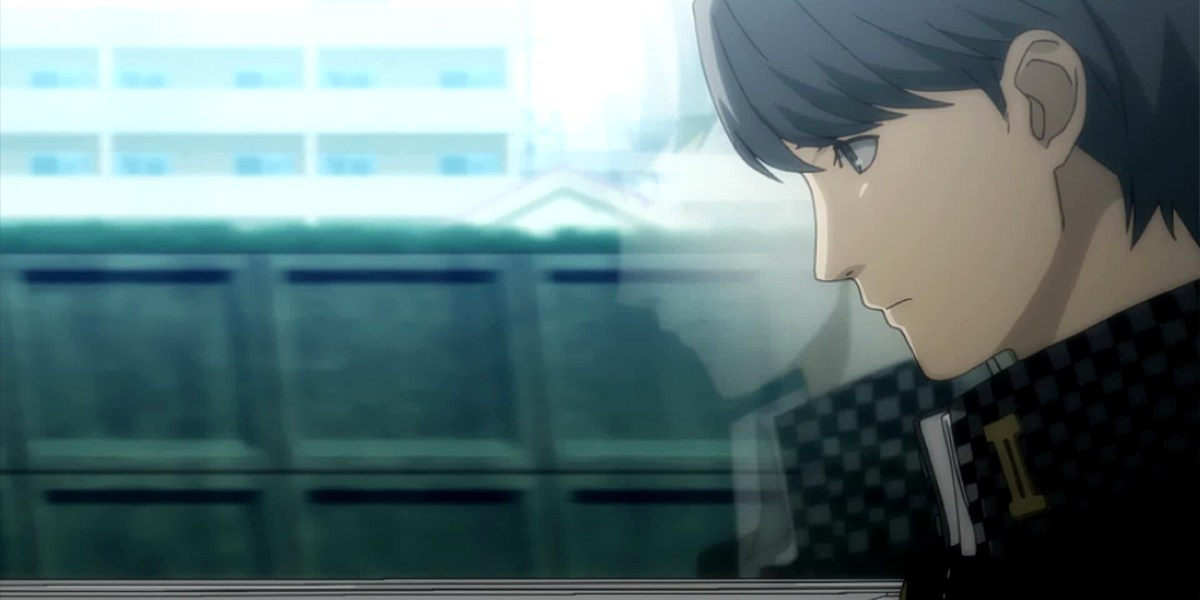 It’s a bit of a shock for Persona 4 Golden to randomly jump onto Steam without warning, but here we are. Atlus’ Catherine is their only other game that had been ported to PC and there’s been radio silence ever since. Plus, a mainline Persona game has never been released on a non-PlayStation console before, so I’d wager that this release wasn’t high up on most people’s expected list.

But it’s here all the same and is a pretty solid port, even if it is questionable in some respects. If you were expecting this port to add a whole new layer of paint to the Vita game, you won’t see that here. But the render scaling, much higher resolutions, and other options make it unquestionably the best way to experience the game now. I can practically hear all 20 PSTV owners chucking those into the garbage. 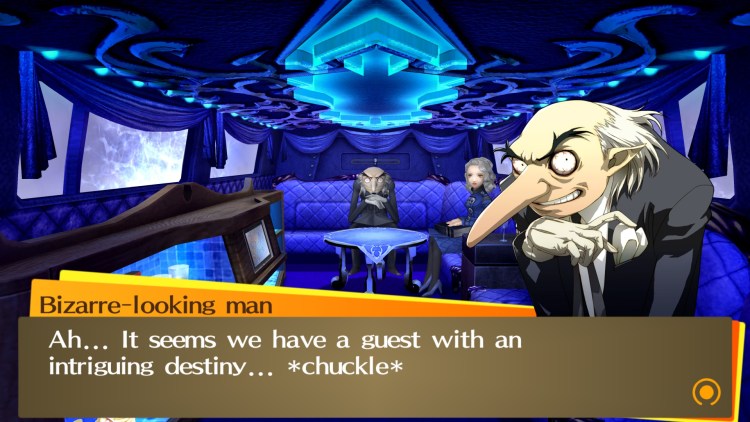 Any fan of the game would be right to wonder what sort of features and options this port will have, so I’m going to break down the gritty details and show off the range of options and features on display. First off, the minimum and recommended specs:

As you can see, Persona 4 Golden isn’t the least bit demanding. This isn’t a surprise, as it’s a port of a Vita game, which was itself an update of a PS2 game from over a decade ago. Suffice to say, if you’ve got some sort of onboard graphics, you should be able to run this game.

One thing I was curious about was how the anime video would look. What’s here certainly isn’t what I’d call bad, but Persona 4 Golden‘s anime cutscenes don’t appear to have been touched up for this release. Granted, the original release of the game wasn’t even 720p, so, again, not a surprise. But there’s a lot of artifacting going on in the video, which can be distracting coming from how sharp it is during gameplay. 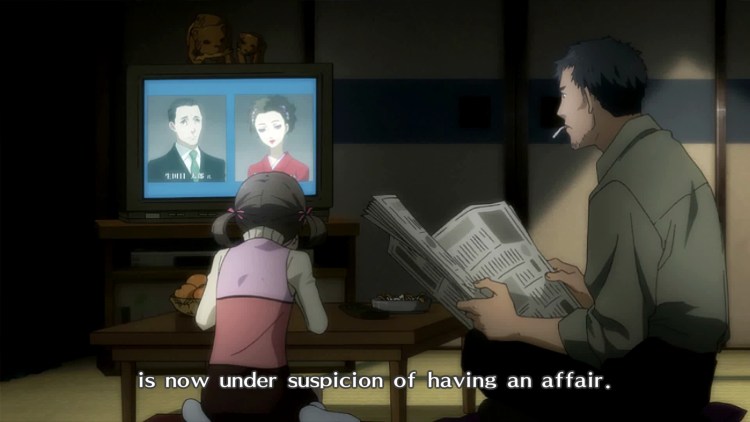 The other big question for this port was the audio. Prior to Persona 5, games in the series were only released in the West with English dubs. Similarly, the Vita version of Persona 4 Golden only had this. I’m very happy to say that this port allows players to freely switch between English and Japanese. As you can see in the above screenshot, it also gives you the option for subtitles during the animated sequences.

Reach out to the truth

I wasn’t expecting much in the way of graphical options and, while the ones on offer aren’t jaw-dropping or anything, they’re certainly more than I had assumed would be available. As promised, high resolutions are available, and the game supports Windowed, Borderless Windowed, and Fullscreen modes. 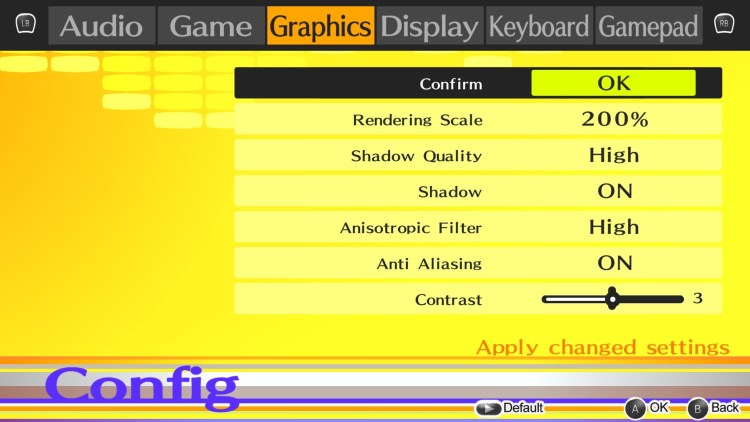 The render scale is automatically cranked up to 200% by default, making the game sharp and clear even without anti-aliasing on. You can also turn shadows on and off (not the enemies, wise guy) and change their quality as well. You’ve also got three levels of anisotropic filtering you can have on, plus anti-aliasing. Persona 4 Golden doesn’t tell you what sort of AA it’s using, but you might not even need it due to the render scale. Let’s take a look at some shots with features turned to max and low. 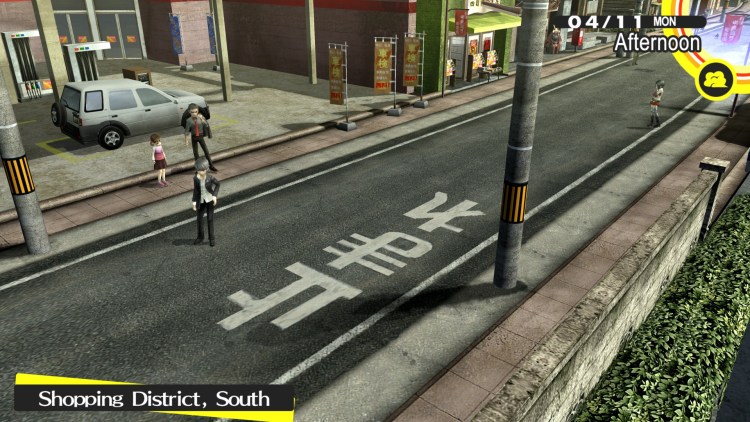 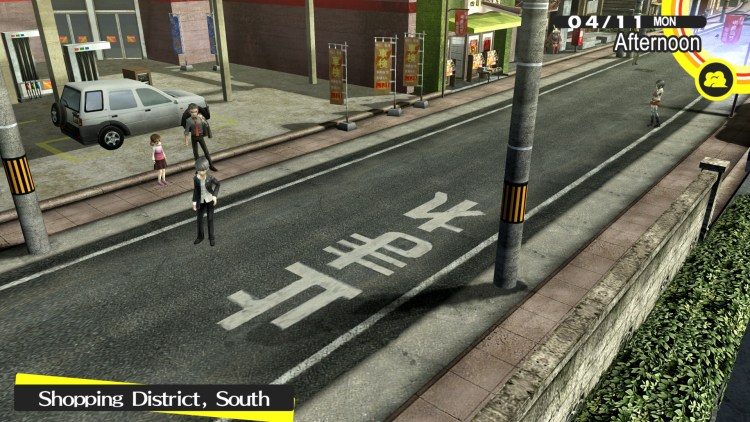 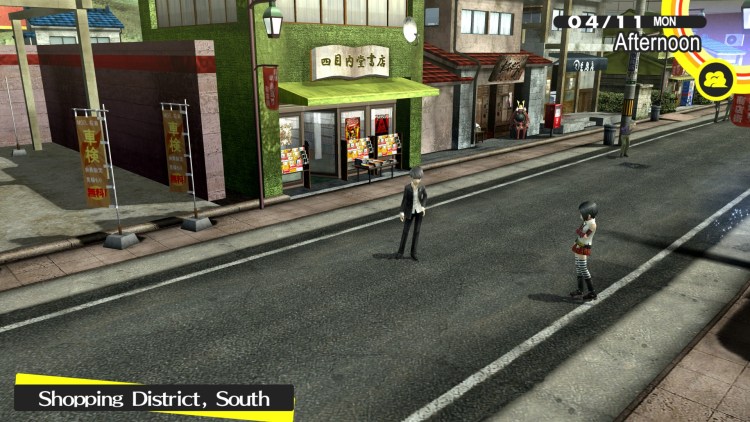 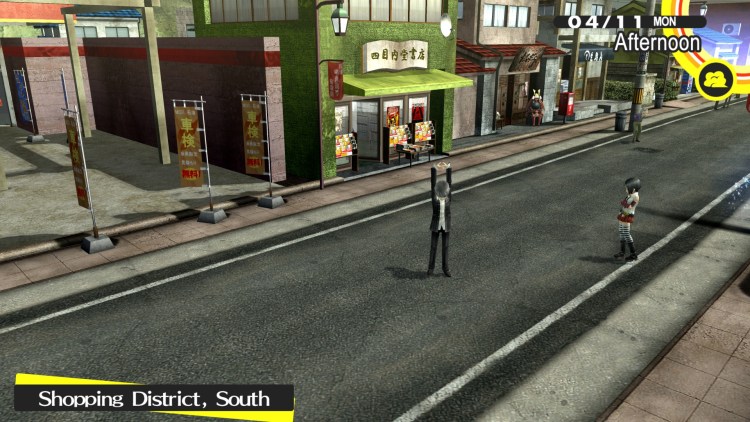 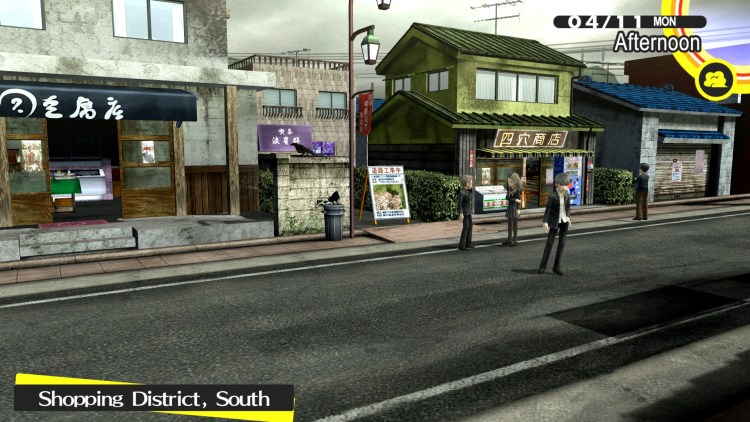 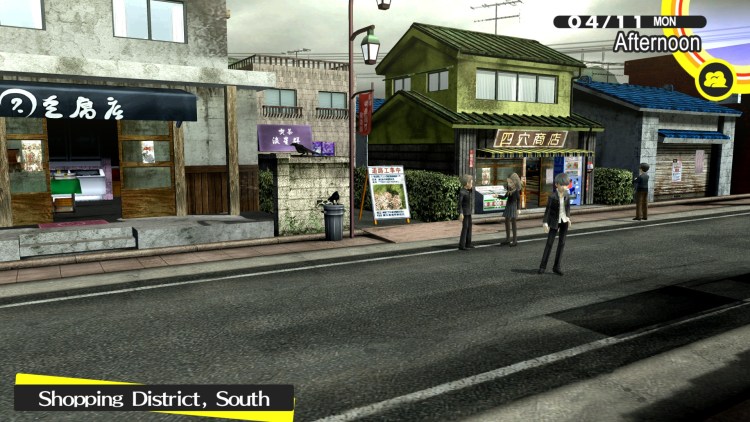 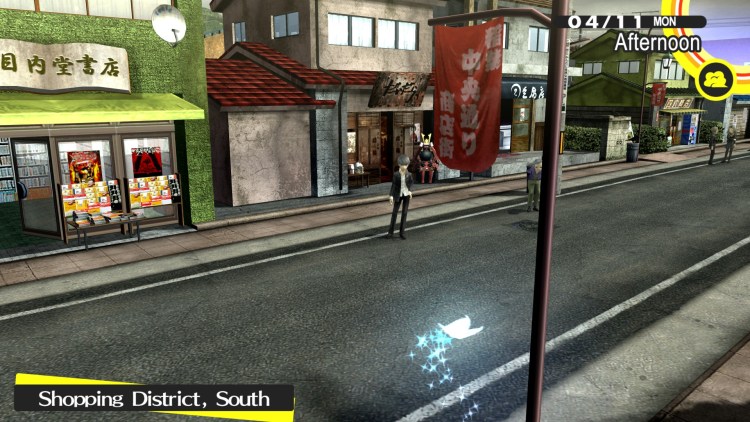 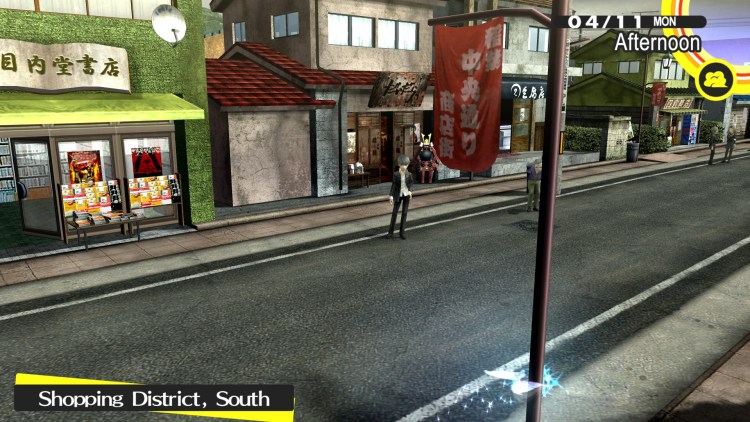 Persona 4 Golden also has Vsync, but it runs very strangely for me. The good news is that, with it off, the game’s framerate is uncapped. The bad news is that messing with it apparently breaks Vsync. Turning it off once met me with a frequent 120+ FPS during gameplay when turned back on. Turning it off again gave me upwards of 240 FPS and I couldn’t lock it to 60 again at all. This will likely get patched out, but at least those of you who like your high refresh rates will get your money’s worth.

One feature that is notably absent is the ability to turn off motion blur. Simply put: the game can get rather blurry in motion, especially with Vsync on. I believe it got less blurry with it off, but since I couldn’t cap it to 60 again, I’m not able to say with any high degree of certainty. At any rate, I suspect the fan community will have this version’s graphical capabilities completely sorted and expanded in no time.

Persona 4 Golden can be played with either a gamepad or mouse and keyboard combo. I played using a Dualshock 4, but there don’t appear to be any options for using PlayStation button prompts. Interestingly, the button prompts appear to be for generic controllers, or possibly Xbox 360 controllers. The indicators for Start and Select aren’t the fancy buttons on the Xbox One pad, but the generic “arrow facing right and left” buttons the 360 had. 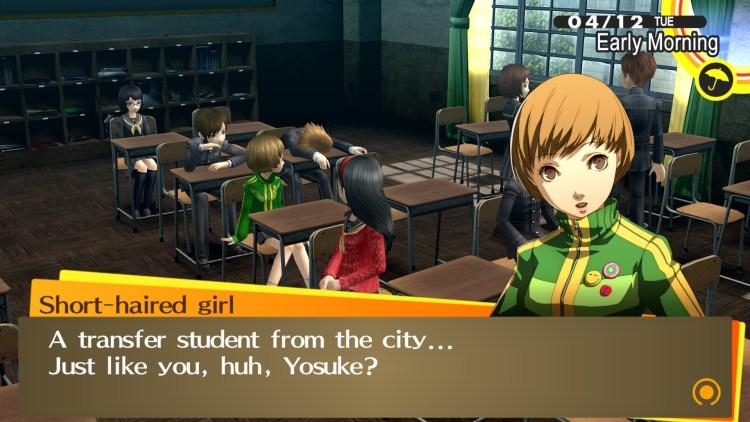 As for mouse and keyboard, you can’t move the camera with the mouse, which can make things cumbersome if you’re playing it that way. However, the mouse can be used in both the game menus and the battle menus, so you can select your desired abilities just by hovering your cursor over them, which is a nifty feature that I wasn’t expecting them to implement.

On the other hand, all inputs are completely rebindable on both gamepads and keyboard. However, only certain keys on the keyboard are allowed for use. There doesn’t appear to be a way to change mouse functions, but you can change which keyboard buttons rotate the camera. By default, that’s set to Q and E, which isn’t too terrible, but some mouse options would have been very nice.

Back to the TV

All-in-all, Persona 4 Golden has a satisfactory port that will likely neither massively disappoint nor rivet fans. Honestly, I’m just glad to have it at all, as people can now play the complete version of one of the best games of all time without staring at a jagged mess for nearly 100 hours. I certainly hope this isn’t the last we see of the franchise on PC, and who knows? If this sells, maybe this won’t be the Last Surprise they spring on us. 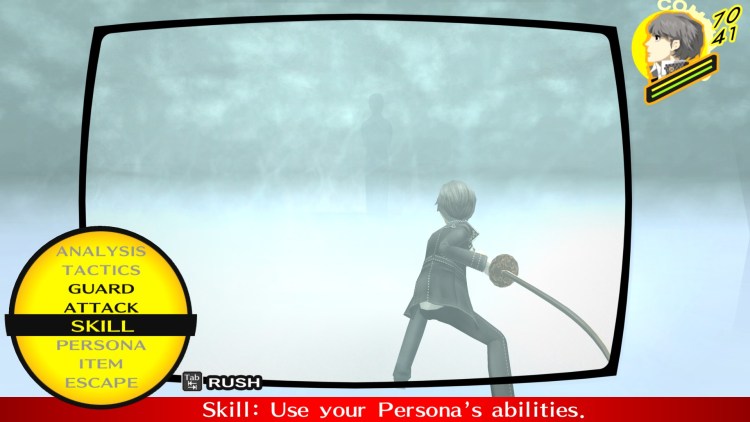 Among Trees early access impressions — A fire among the firs