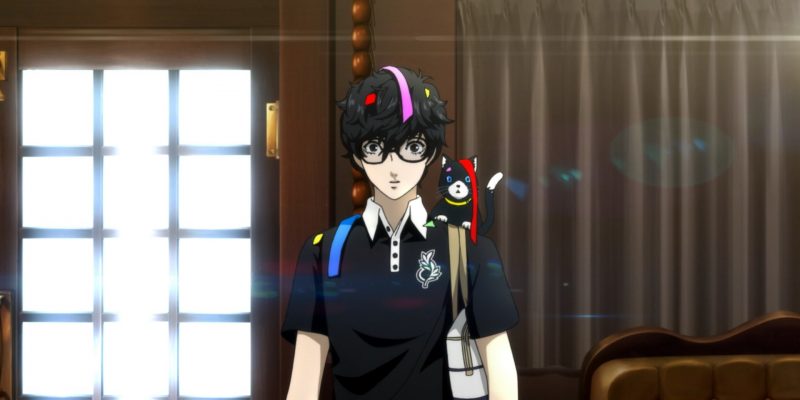 Congratulations! You’ve made it to the very end of Persona 5 Strikers… as long as you failed to notice that you haven’t unlocked some skills, and there’s one major plot point unresolved. Either way, the Thieves feel like this battle will fix everything, so you might as well give it your all. The battle with Tony Stark Akira Konoe in the Osaka Jail definitely feels like a climax boss fight for Persona 5 Strikers, though. It’s got two very distinct phases, unique music, and a remix of the “shit just got real” boss music from Persona 5, Rivers in the Desert. You’ll want to take this one seriously.

As per the norm with Persona 5 Strikers, Akira Konoe does indeed have an EX refight, so I’ll be going over the changes to that after the initial boss fight guide. Note that the EX refight is only available in the post-game: the regular refight is the same as the normal battle. 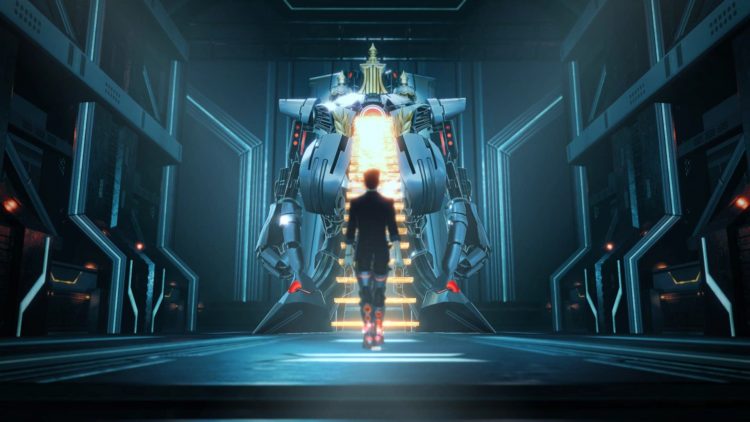 Oof, that’s a lot of resistances. Fortunately, this first phase is actually fairly simple, not least because of the giant railguns mounted in the corners. 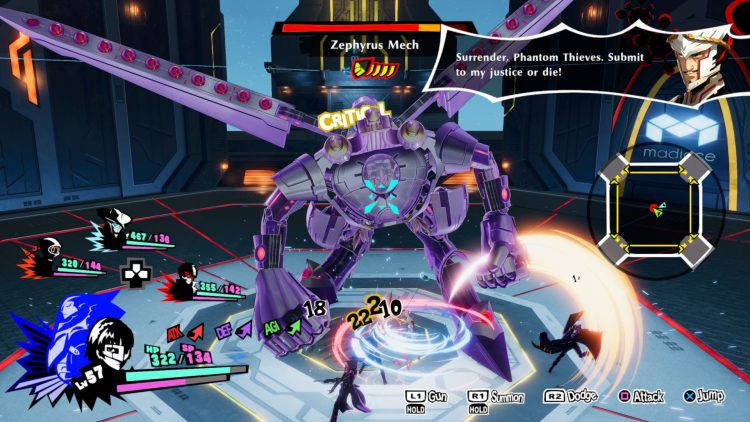 Most of the attacks are well-telegraphed and simple to dodge. The rocket punch can be avoided sideways, and pretty much all of his laser attacks face forward. If you back him towards a corner, you can actually avoid most of these just by running between his legs. Be careful when lasers are shooting out of his robo-shoes, though, as he’ll turn around to face you while those beams are coming out. He’s also got a missile spam which you mostly just need to run around to dodge.

The signature bit of this battle is when he uses Supernova. This will result in constant beam spam and missile barrages. Grapple up to one corner and slide along the wires to dodge all of the attacks until the Zephyrus Mech overheats. At that point, grab onto one of the railguns and blast the mech to down it and give yourself a good chance for free hits.

With those weaknesses, Ryuji and Makoto are technically good choices here, but I always found Ryuji a bit underwhelming. Personally, I opted for Makoto, Sophia, and Zenkichi. 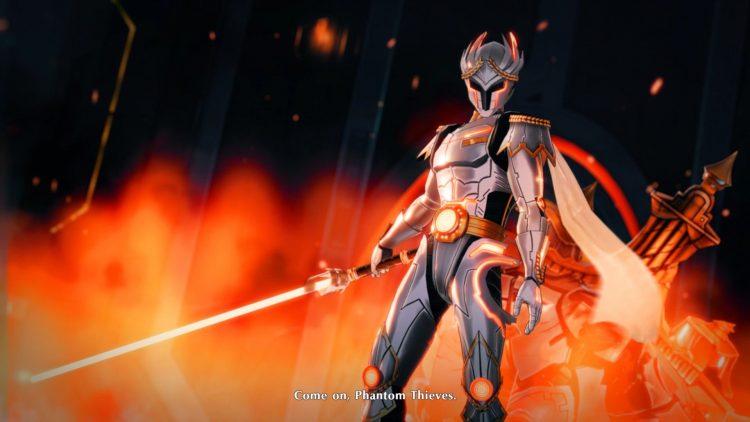 Naturally, for a climax boss (even if it’s technically not the final one), we need more than just one phase. Right after taking down the Zephyrus Mech, Akira the Hero himself pops out with a beam sword, ready for phase two.

There are two ways of approaching this Osaka Jail boss fight boss fight against Akira the Hero. You can either stay back and only attack him when he’s not doing anything, or you can learn his moveset and react accordingly. Also, note the wreckage of the mech around: most of these bits can be used to hit him with Electricity. Anyway, let’s go over those moves. 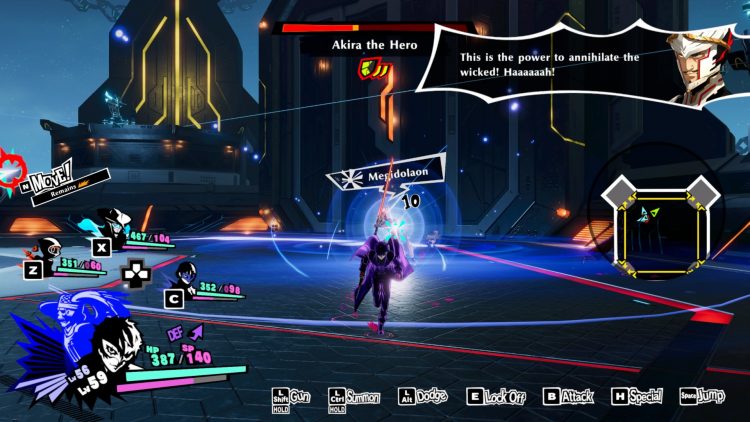 First, his Cross Slash is a dashing attack. He can also fire out a beam that will go in a 180-degree arc; this is surprisingly hard to dodge because of the speed of it, but if you’re behind him or jump in time, you’re safe. Dynamic Meteor happens after he leaps onto one of the mech’s remains: he’ll jump into the air and slam onto a target area, so get away from that. Finally for the non-confusing moves, he’ll start using Megidolaon near the end of the fight. This will suck you in and then explode for massive damage, so dash away.

Then we have his Justice Sword moves. There are four of these: Alpha, Beta, Omega, and Zero, and mixing up which one does what means you get hit in the face. Alpha is three slashes in a row. Beta is an overhead swing which will usually Dizzy anyone it hits. Omega is an AoE swing around him. Finally, Zero is a ranged slash that creates a sword beam.

Akira the Hero is a quick and nimble target, but his weaknesses give you plenty of opportunities. Like with Akane’s Joker you might want to take this a bit slower: he’s a smaller, human target, and he moves fast and hits hard and in combos. Nonetheless, his moves are pretty well telegraphed barring the beams and the Justice Sword (until you get the hang of which one does what.) 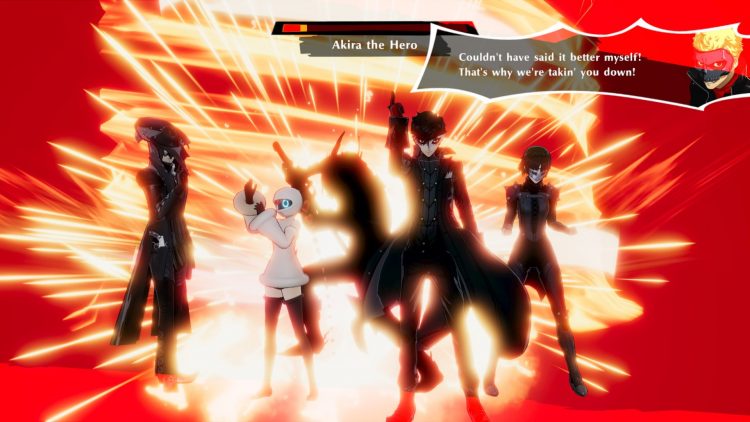 For this Osaka Jail boss fight, the EX refight doesn’t change up the Zephyrus Mech fight much, to the extent that I apparently didn’t write any notes for that at all. The Akira the Hero fight, though? Yeah, that’s different.

For starters, he now has Megidola as well, which is a ranged blast that has to be dodged. Justice Slash Beta causes an explosion where it hits, so you don’t want to be near him when he’s using that. Justice Slash Zero is now two sword beams — a vertical one that must be dodged to one side, followed by a horizontal one that you need to jump over.

Then there’s Dynamic Meteor. When this lands, it launches out a shockwave that covers the entire arena and must be jumped over. What’s worse, every subsequent time Akira the Hero uses Dynamic Meteor it adds an additional shockwave, which means that as the fight goes on you’ll need to time your jump carefully because there’ll be five of the sodding things racing towards you. If you’re having trouble jumping over all of them, remember that you can attack in mid-air to extend your hangtime even if you’re not hitting anything.

This is arguably one of the trickier EX refights, if only because basically everything that made him difficult before (his speed and his short attack telegraphs) are amped up to 11. He’ll chain moves together a lot quicker, and his moves are nastier.