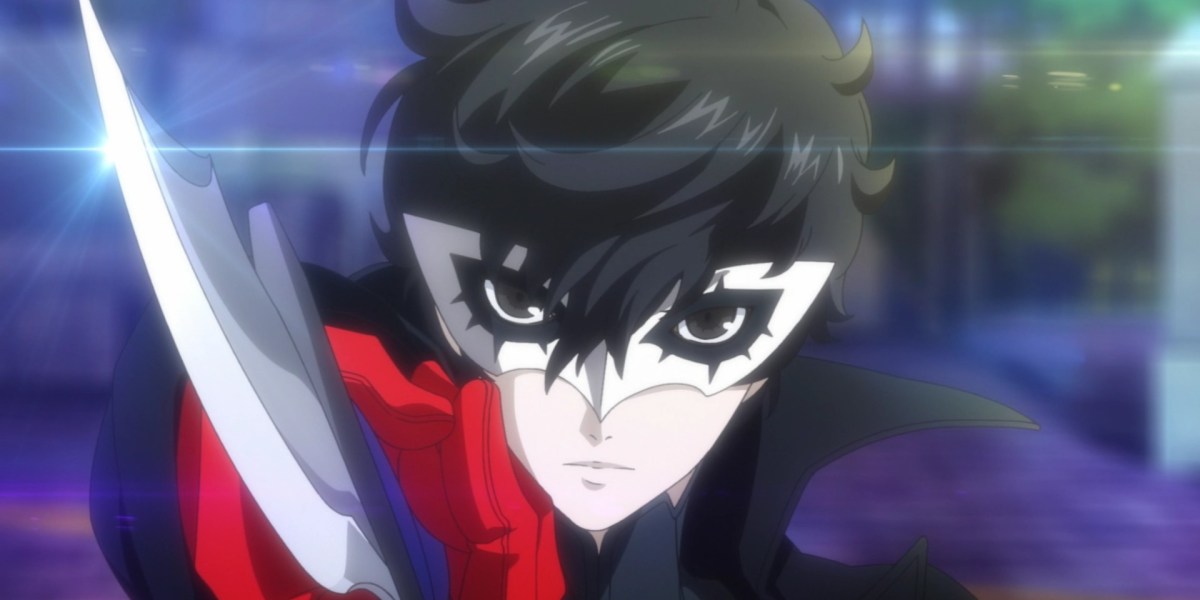 This probably seems odd coming from somebody who covers games for a living, but if I know I’m going to play something, I try to learn as little as possible about it. I prefer to play things blind: no trailers, no leaks, no details. What I knew about Persona 5 Strikers was that it was a sequel to Persona 5, and that it was developed by Omega Force in collaboration with P-Studio. In short, I expected Persona 5 Musou edition; something akin to Hyrule Warriors or whatever. Lots of combat on wide-open maps with familiar characters.

I was very, very wrong. And that wasn’t the last surprise.

Persona 5 Strikers is eerily close to being an actual Persona game. Most of the hallmarks are there: long cutscenes, philosophical musings, Persona fusions, type weaknesses, and the Power of Friendship. Hell, even most of the Persona 5-specific stuff is in there too, like sneaking around the maps and ambushing enemies from behind. Wide-open areas with chokepoints of foes are entirely absent here.

One thing that makes Persona 5 Strikers a little tricky to talk about (and, in part, recommend) is that it is definitely a direct sequel to Persona 5. It’s set roughly six months after the events of that game, and you can infer a lot of spoilers from the dialogue and situations. Hell, some of the biggest plot twists from its predecessor are outright stated. As such, this is a dangerous place to jump in if you haven’t played the original game… which, uh, hasn’t been released on PC. Yet. Please, Atlus?

But just to catch you up, here’s a (very) rough, spoiler-free outline. A group of students awaken to mystical powers that are fueled by their rebellion and take the shape of religious icons and mythological beasties. Branding themselves the Phantom Thieves, they use these Personas to explore the Metaverse — a cognitive world where people’s twisted notions and worldviews take physical form — and change the hearts of criminals that the law can’t or won’t touch.

You could be forgiven for thinking this sounds like weird anime twaddle, because… well, it kind of is. But it’s really good anime twaddle. I say that as someone who thinks Persona 5 was one of the best games of 2016. In Strikers, the characters are well-written and inherently likable, the plot is gripping, and the twists are alternately horrifying or joyously triumphant depending on which side they favor. It’s legitimately hard not to get sucked in, and it’s just overflowing with effortless cool. Not to mention the fact that the whole experience is boosted by the funky acid-jazz soundtrack. I did mention “effortless cool,” right?

That outline doubles as a handy introduction to Persona 5 Strikers, too, because Strikers hits a lot of the same story beats as its predecessor (and the same glorious musical highs — I cannot praise Shoji Meguro’s tunes enough). I’m not going to go into details, but you’ll once again be exploring the Metaverse, changing hearts, dealing with the police, and witnessing a fair bit of trauma. And it’s just as well-written as its predecessor.

The main difference here is that the Phantom Thieves aren’t constrained to Tokyo. Strikers kicks off with protagonist Joker returning to Tokyo on holiday. The retired Phantom Thieves reunite and make plans for a road trip around Japan. Unfortunately, Metaverse shenanigans are happening all over the country, so the road trip with the Phantom Thieves will involve a bit of work.

The downside, of course, is that Strikers assumes you’re familiar with these characters. None of the old guard get any character development, because they basically dealt with all of that before. The focus here is on the new mystery and the handful of new characters instead. Combat is flashy and a little overwhelming at first, but you’ll get use to the ebb and flow fairly fast.

Metaverse combat both is and isn’t typical Musou stuff. Dungeons are actual dungeons which you’ll dip in and out of repeatedly, rather than singular levels. Combat is a separate thing. Basically, if you’ve played a Persona game before (or any JRPG with enemies appearing on-screen) it’s exactly that sort of dungeon exploration.

However, when a fight breaks out, the section of the dungeon you’re in is walled off and things go full Musou. Hordes of enemies will spawn, and you tear through them with the four Phantom Thieves currently in your party.

This doesn’t have the huge breadth of characters of most of the Warriors games, but every single character is distinct and has a unique playstyle. Joker is a jack-of-all-trades; being able to use any Persona means that he’s rarely at a disadvantage, and he can close gaps quickly and hit hard. Ann is more of a black mage, but her whip gives her some very wide-reaching basic attacks that can clear out trash insanely fast. And then there’s Haru, who can extend the duration of every single attack she makes by holding the button down, ramping up the damage as she goes.

At first, it’s… honestly kinda tricky to get to grips with. Some arenas are a touch small, and it’s relatively easy to lose track of what’s going on. Equally, Strikers doesn’t really expect you to stick with a single character. Returning Persona 5 mechanics like the Baton Pass and One More expect you to swap characters frequently in a single battle, and enemies being weak to different elements means it’s best to bring certain characters to certain areas. Showtime and All-Out Attacks are both insanely flashy. Smacking a missile at enemies with a baseball bat is arguably one of the less outlandish things you’ll see.

But it doesn’t take too long before the combat clicks, and you’re pulling off the sort of slick combinations the Phantom Thieves are known for. Stun some enemies with a magic attack from Yusuke, then go for a lengthy combo with Joker. Follow up with a gun attack for Haru, and then maybe flick over to Ryuji for a hard-hitting slam attack. Or, hell, just dizzy the enemies for a flashy All-Out Attack, or wipe out hordes at once with a Showtime.

The combat is excellent. It’s Musou shenanigans in fine form, but it feels like Persona, and the two combine extremely well. Not only that, but bosses and tougher enemies switch things up with unique mechanics, patterns to learn, and attacks that must be dodged in specific ways, making this more than just a basic hack-and-slash game.

And while the dungeon crawling is the main aspect of the game, there are plenty of little side functions. Characters earn Master Arts that expand their repertoire. Bond skills give buffs to all sorts of aspects of your gameplay. Persona fusing and upgrading is still there, if limited in a few more ways, and there are dozens of side quests to accept and bonus bosses to defeat. My complaints are, honestly, few. One is that the dungeons start getting a little tedious around the time you hit the third one, because “go to these three places then fight the boss” can only stay interesting for so long, especially in interlinked maps that give an illusion of having alternate routes. Fortunately, things get a lot more interesting again after the third, which is also when the plot starts to really shift up a notch.

The plot is another complaint, but only a very mild one. Persona 5 Strikers is… well, it’s a refrain of Persona 5. I noted above that it hits a lot of the same beats, but that doesn’t quite describe just how close it stays to the arc that Persona 5 took. Which isn’t a bad thing, per se (and this actually feels like a canonical sequel, as opposed to the Dancing or Arena games), but it feels like a missed opportunity to explore some different themes. Some sort of end-game endless combat mode wouldn’t have gone amiss, either. Nonetheless, it runs well and looks good on PC, and these issues aren’t enough to drag it down. Wake up, get up, go buy this

If you’re a Persona 5 fan, the only reason not to pick this up is because you haven’t finished that game yet, and that’s a perfectly valid reason because spoilers. It feels like a shorter, bonus Persona adventure with a different combat system, rather than Persona characters being shunted into a different game. It’s practically Persona 5-2.

If you’re new to the series, it’s a bit of a harder sell. The gameplay mechanics are all top-notch and I have no doubt you’ll enjoy them if you have any love for hack-and-slash or fast-paced action RPGs. The flipside is that this is extremely plot heavy, with lengthy segments between dungeons. There are also a whole lot of callbacks, references, and cameos that will leave newbies cold. Hell, there’s maybe two hours of plot and tutorial before you really get started in the first dungeon, and Strikers focuses more on reintroducing characters to those who know them than on bringing newbies into the world. Plus, y’know, all the spoilers.

Nonetheless, it’s such an enjoyable game that I’d still recommend it. The JRPG mainstays like elemental weaknesses work surprisingly well with the Musou gameplay, and every character feels distinct enough that some work is required to play them effectively. As a sequel to Persona 5, it’s superb. As a stand-alone title, the actual gameplay is easily good enough to carry it.

No fusion accidents here: the merging of Persona 5 and the Musou games has resulted in a very strong Persona indeed.