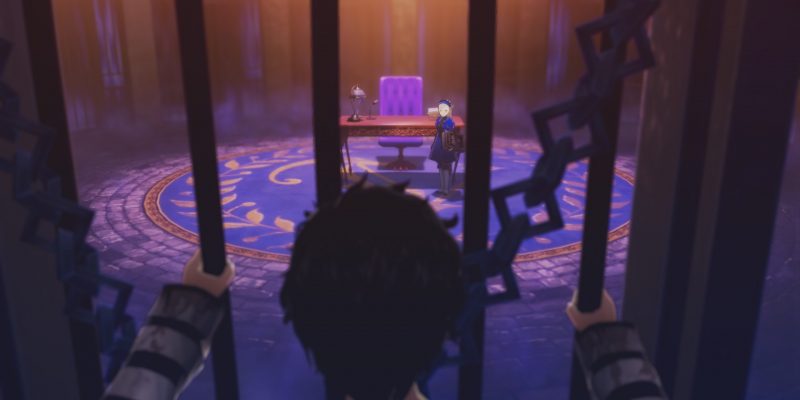 Persona series fans are likely expecting something notably different from a spinoff of Persona 5. And that goes double due to Persona 5 Strikers being a collaboration with Omega Force, the developer behind the Warriors franchise. It is clearly an action game. However, Persona 5 Strikers actually has much more in common with the Persona games than the Warriors series. I’m going to break down exactly how the spinoff compares to Persona 5 — and if fans of that game will feel at home or not.

Simply put, Persona 5 Strikers isn’t just a spinoff of Persona 5 in the way that the Persona Q games are to the mainline series. Strikers is a sequel, taking place six months after the vanilla game (or about four months after Royal, which Strikers also doesn’t spoil if you’ve only played vanilla). The game sees the Phantom Thieves called back into action when people mysteriously start behaving strangely again. What follows doesn’t just feel like Persona 5, it’s more of that game in a lot of ways. Even though you won’t find a single turn-based battle anywhere in sight, the structure is the same. You’ll go through hours of narrative sections followed by excursions into the game’s dungeons. They’re called Palaces in P5, but they’re known as Jails in P5S. Not that they’re the same thing.

There is a standout difference between Persona 5 Strikers and its narrative predecessor — other than the complete lack of turn-based battles. It completely excises critical features of the Persona series. There are no longer any social aspects; the passage of time is tied to the narrative and nothing else. That isn’t to say that you won’t find any optional events. Requests, however, do return from the original game. However, you complete them both in the real world and the Metaverse as opposed to changing wicked hearts in Mementos. You’ll receive some of these from your teammates, leading to additional events. There are occasional events that you’ll see from merely talking to your teammates when you see them out and about. 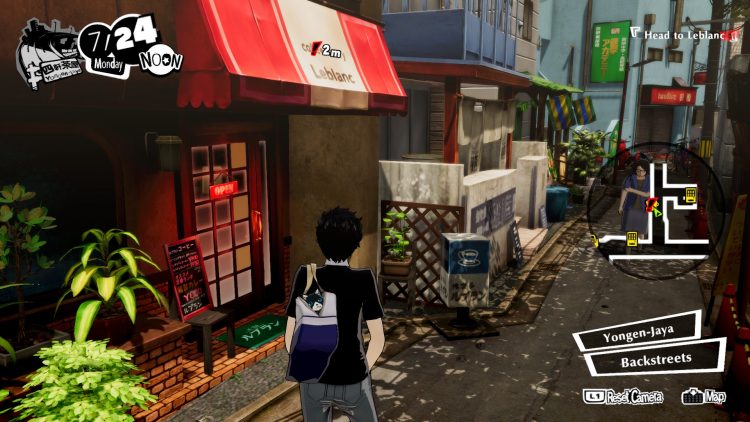 Since there aren’t any social links, there are no more Arcanas and no individual relationships to level up. There is something similar, however. Persona 5 Strikers has a bonds system. It features a meter that fills up as you strengthen your bond with your teammates, increasing normally throughout the story. Doing the aforementioned events and certain requests will also fill up the bond gauge. Every time you reach a new bond level, you receive bond points that can be spent to purchase perks. These perks give you a lot of different bonuses. It’s not as satisfying as the social link system, but it does the job.

Some of the locations from P5 show up again in Persona 5 Strikers. The first part of the game takes place in Tokyo, so you’ll find Yongen-Jaya and Shibuya’s Central Street recreated. You’ll even use the main character’s bedroom as the hideout.

But afterward, the game changes things up. Each Jail is in a different part of Japan, so the Phantom Thieves go on a road trip, roaming from place to place. You can’t return to previous areas, either — unlike in Persona 5. Similarly, Jails don’t vanish when you complete them, and you can return to them at will, often for requests.

As you can see, Persona 5 Strikers is a different beast altogether. But when you look at the story segments, the menus, the character portraits, speech bubbles, fonts used, and even the save screen, you’ll see a whole host of familiar elements. Presentation-wise, it’s practically identical to P5. That save screen thing isn’t a joke. It was completely recreated, down to the sound effects. When you find items in Jails, they look exactly like the item cubes in Mementos. The treasure chests are also similar. Strikers truly looks and feels like an extension of P5, to the point that I felt right at home coming fresh off of Royal. The stats menu that lets you switch characters out even looks and works identically, down to the buttons used. 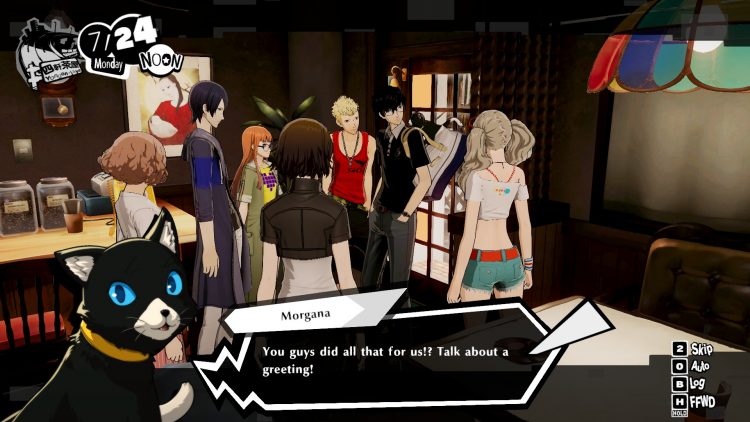 The Velvet Room also makes a return to Persona 5 Strikers. Only, Igor is nowhere to be found. Instead, you deal with Lavenza. Fusion here is entirely different. In P5, you could fuse any two Personas for the most part. Here, you can only fuse by result and you’ll need Personas of minimum levels. It’s kind of weird, and I don’t like it as much. You can also use points to level up your Personas.

Naturally, acquiring Personas has changed entirely. Negotiation is gone. Instead, it functions like it did in previous games. After a fight, you have a chance of enemies dropping a mask, which you’ll use to add that Persona to your stable. But if you’re full up, the Persona is added to your registry and can be summoned free of charge your first time. I think this is a welcome change, as you no longer need to worry about missing out.

As for the Personas themselves, they level up and learn new moves exactly like in P5. Except that they can no longer completely forget moves. You merely select them from a menu while outside of combat, although you can still only have a certain number at a time. The combat is that of a Warriors game, with real-time battles that see you fighting hordes of foes. But the mechanics on top of them are all Persona. You’ll want to hit their weakness, which is often the same here as it is in P5. Doing so gives you a One More which can still be used to segue into an All-Out Attack. Showtimes return from Royal, but they function like musous from Warriors games instead of randomly popping up onscreen. Futaba even still has her special support functions during combat! 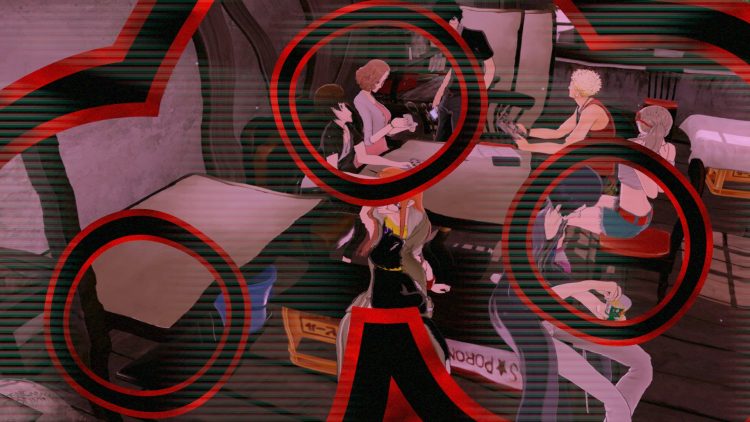 Skills to pay the bills

Pretty much all of the familiar skills show up here and are used in the same way. You can swap between your four characters during battle and time will stop while you summon a Persona. All of the knowledge you have about how P5 works can be applied in Persona 5 Strikers. The developer successfully married the two styles of gameplay in an impressive fashion. Movement in the Jails is similar to that in Palaces, save for the fact that your characters can now double jump.

Enemies patrol exactly like in P5 and you can still ambush them, which will give you the opportunity to get a major advantage. But enemies can also get an advantage if they strike you first. You don’t have Royal‘s grappling hook, but characters can reach higher ground by leaping to a location, which works identically. It’s all very familiar. A Jail’s security level will even increase when you’re spotted! Honestly, there’s truly so much here that’s highly similar to or directly inspired by mechanics in P5. Social features and time management are missed, but Persona 5 Strikers inarguably looks and feels like a Persona game. Which is quite an accomplishment, if you ask me.

Persona 5 Strikers will be available to play in just a few days, so you don’t have long to wait until you’re once again immersed in the world of the Phantom Thieves. Don’t get your heart stolen, now.