I’ve been pretty curious about what sort of strange hybrid version of PES 2015 would be appearing on PC since Konami admitted that the platform would be getting a somewhat downgraded version. By the company’s own accounts, PC PES 2015 should play the same as the PS4 version (which is really what matters,) but for some reason doesn’t have the same image fidelity.

With the demo finally available today, it provided a nice chance to have a look at the PC version and get an idea of how this year’s edition plays. 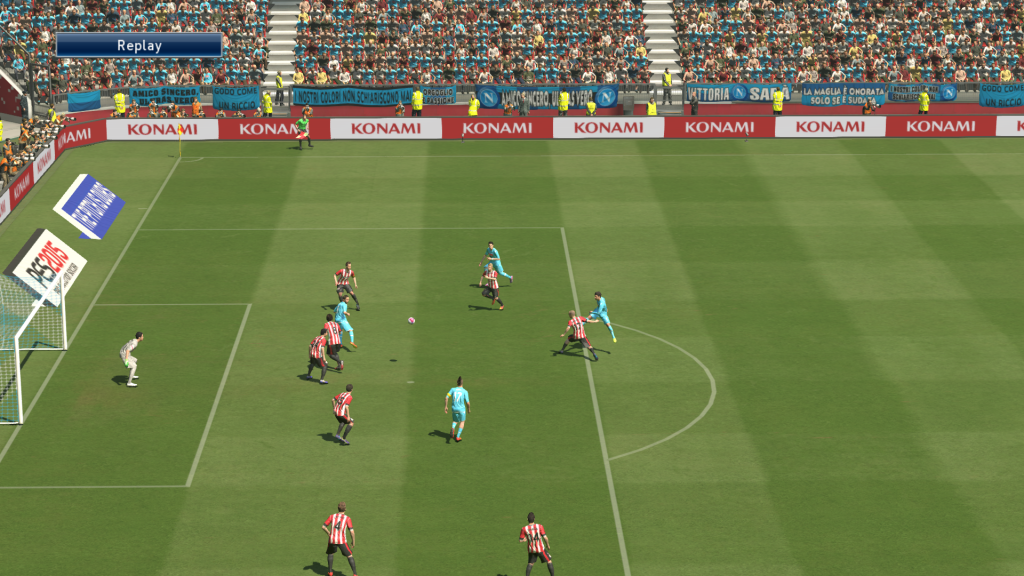 I’ve predominantly been a FIFA player these past couple of years; not through any sort of brand loyalty, but just because those were the football games we actually received review code for here at IncGamers. This year was the same, which is why were able to run a full review of the (rather disappointing) FIFA 15 but probably won’t be looking at PES beyond this demo impressions piece (unless I end up buying it at some point.)

With that in mind, this isn’t going to be a full on FIFA 2015 vs PES 2015 showdown. Since I have about 50 hours put into the former and just spent closer to two with the demo version of the latter, that wouldn’t exactly be constructive.

Instead, let’s have a look at what kind of graphical Frankenstein Konami have given us with this release. 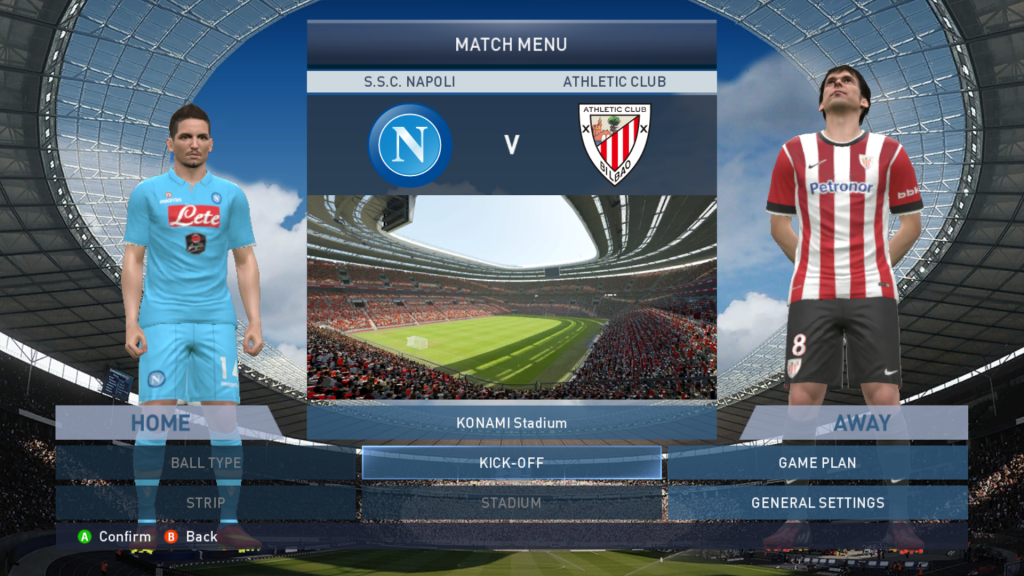 The first thing people trying the demo should know: there’s a Settings.exe hidden inside the Steam folder. Prior to that, PES 2015 was launching in a 720p window with no apparent way to change it. The settings launcher includes a fullscreen option (as you’d hope,) and allows you to crank up the resolution to (in my case) 1920x1080p. There isn’t much else in the way of graphics options beyond three (low/medium/high) presets.

Everything you see illustrating this article is with the graphics set to “high.” As you can probably tell, the results aren’t amazing. Players have a fair bit of aliasing on them, whatever lighting model is being used looks awfully flat, and the grass on the pitch looks rubbish. On the other hand, elaborate grass textures are pretty much at the absolute bottom of my “things that are most desirable in a PC football game” list.

There’s no way you can describe the PC version of PES 2015 as a looker, and it baffles me that we aren’t worthy of the same image quality as the PS4/Xbox One versions. If nothing else, the low overall image quality means this game should run on almost any vaguely games-oriented PC still capable of booting up; but I can also understand people not wanting to support this kind of behaviour.

PES 2015’s demo ran at 60fps throughout, without the kind of “micro-stutter” which plagued FIFA’s latest PC effort. So that was nice. 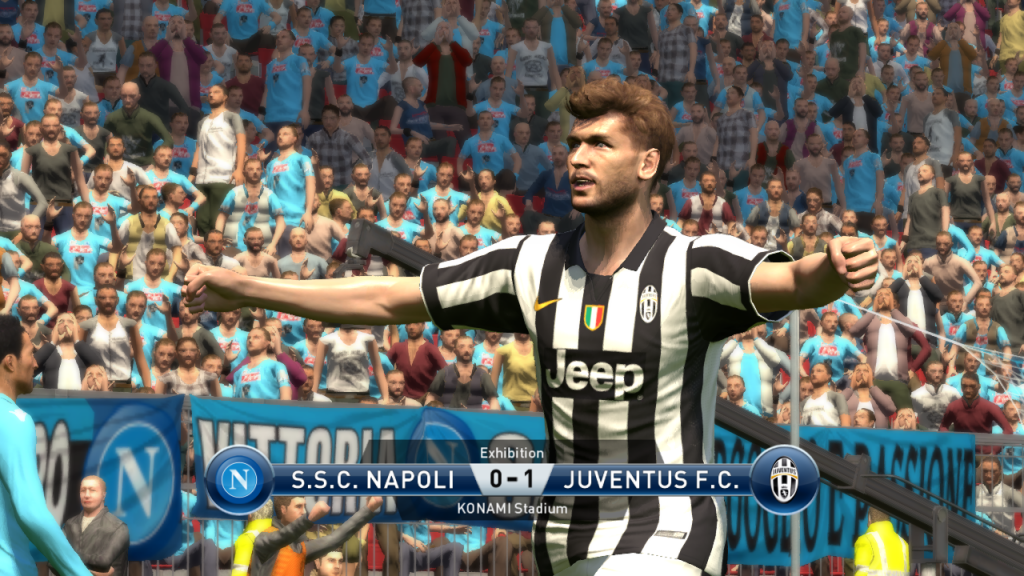 Some of the player faces look alright. The crowd are horrific.

The neglected visuals are a bit of a shame, because gameplay-wise (the factor which obviously carries most weight) PES 2015’s demo feels pretty satisfying. Once I’d figured out how to switch the default control scheme to a more FIFA-player-friendly one and my muscle memory stopped using “cross/long pass” whenever I was in a shooting position, things felt pretty good.

Players seem to have an impressive sense of physicality, which contributes both to jostling for position and general balance when in possession. With semi-assisted passing switched on (a level of control I also tend to opt for in FIFA,) PES 2015 did a fine job interpreting which player I’m actually aiming at; something its competitor struggles with at times. Even on the demo’s lowest difficulty (hey, it’s been a while since I played this series,) it proved impossible to just sprint directly through the defense. Positions and openings had to be worked.

There’s a little (presumably animation based) input lag, but players are otherwise quite responsive.

Particularly impressive were the AI’s adaptive tactics. When 1-0 down against Juventus, I saw them reverting to a much more possession-based game around the 70 minute mark. Their back line and midfield started to prioritise just holding on to the ball, happy to settle on their lead. In contrast, teams that are trailing will start pushing more men forward. 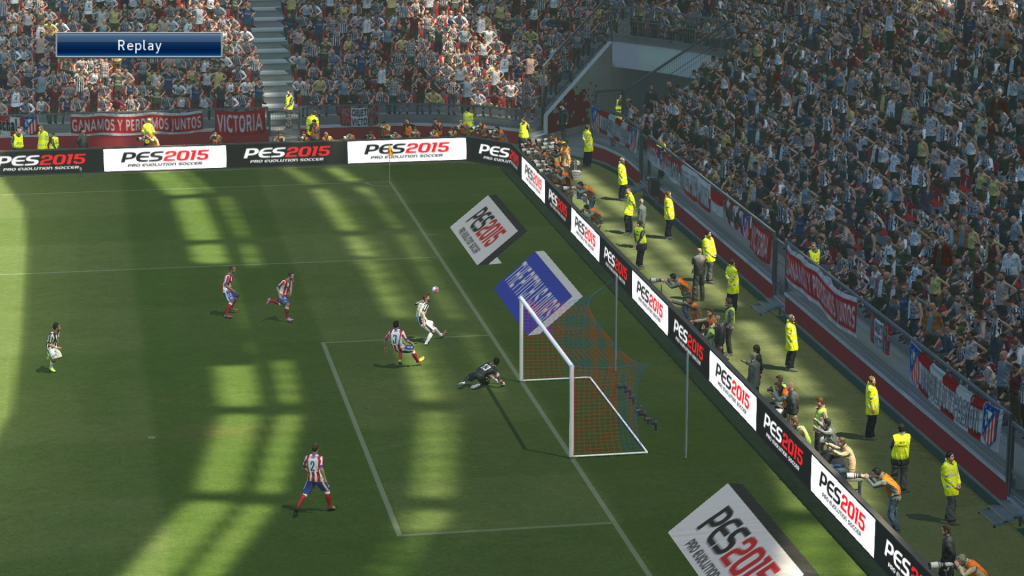 Juventus look for a cheeky goal while the keeper searches for his contact lens.

While I have seen the latter happen in FIFA, the AIs reaction to being a goal or two down is usually to gain mysterious superpowers for a while. The “momentum change” in FIFA tends to feel artificial, like an actual switch being toggled. Based on the couple of hours spent with PES 2015‘s demo, AI responses feel more dynamic. It’s always hard to say how much of this is confirmation bias or some kind of placebo effect (the concept of artificial “momentum” boosts even existing in FIFA is still disputed,) but that’s how it presented itself to me.

I wouldn’t want anybody to take this article as a recommendation of the full PC version. I’ve not played it (or any of the myriad modes offered,) and judging by the Steam forums there seem to be some online issues afflicting the title right now. But for anybody, like myself, who wasn’t all that impressed at FIFA 15‘s efforts on PC might want to give the PES 2015 demo a go. It’s not going to win any awards for presentation but, offline at least, it plays an absorbing game of football.