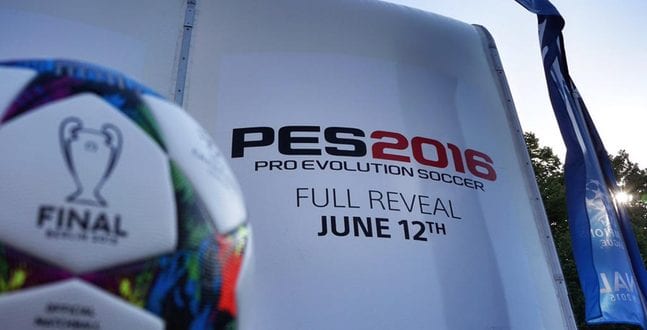 It looks like Konami haven’t completely retreated from videogames just yet, because there are signs today that PES 2016 will be getting a pre-E3 “reveal” of some sort.

The image above, according to Dutch publication Gamer.nl, comes from the official PES stand at the Champions League. It indicates a “full reveal” (so, not just a teaser video before E3, then?) of PES 2016 on 12 June.

News that the PC will be getting a version of the game once again comes from a French publication, blogpes.fr, who spoke to Konami Europe’s director of marketing, Stéphanie Hattenberger. Thanks to my amazing French reading skills (and a bit of help from Google … and the fact that ‘PC’ reads the same in all languages,) I’ve been able to confirm that Hattenberger mentions the PC as a release platform.

She also says PES 2016 will be using the Fox Engine again.

The PC version of PES 2015, sadly, was pretty poor in the technical department, sharing more with the PS3 version than the PS4 release. Given how well Metal Gear Solid V: Ground Zeroes (another Fox Engine title) translated to the PC, it’s clear that our platform could handle the best possible version of PES 2016 – if Konami decide to actually give it to us.