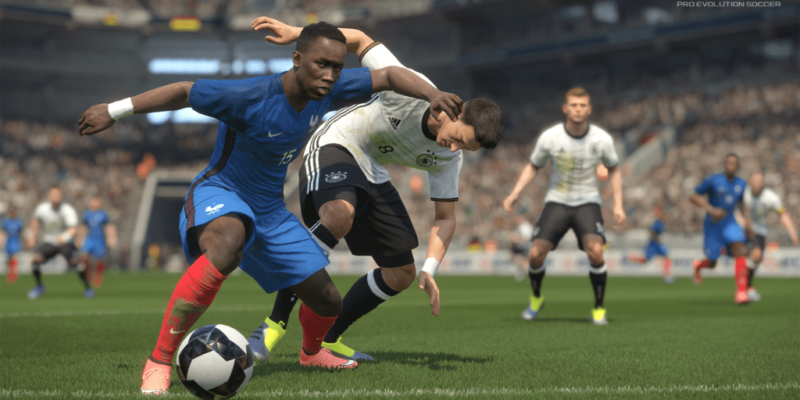 We’ve reached the traditional part of the PC Pro Evolution Soccer cycle where the latest upcoming version, PES 2017, is confirmed to be a half-baked ‘hybrid’ port. As noted by GamingRespawn, PES ‘Brand Manager’ Adam Bhatti delivered the news in a twitter reply to PC users last week.

In response to people asking whether PES 2017 would, like last year, be inferior in graphical quality to the PS4 and Xbox One versions, Bhatti replied: “We’ve answered many times, it’s a shame you haven’t seen it. Do not expect it same level as PS4/XBone”.

Presumably by “we’ve answered many times” he’s referring to twitter posts, because to date there has been absolutely zero information about the quality of the PC port on Konami’s official PES 2017 site, or in any of the press releases put out to date, or from any of the preview/trade events where PES 2017 has been shown. You know, the more visible sources. Last year PES 2016 was even advertised on Steam with stock PS4 screenshots, even though the PC version looked nothing like the PS4 release.

So, this year, expect PES 2017 on PC to be another mish-mash of graphics from the 360/PS3 versions, features from the Xbox One/PS4 versions, and long debates about whether the gameplay is exactly the same as on ‘current gen’ consoles or a bit of a hybrid. On the brighter side, the PC versions will, once again, be the most straightforward to mod and will (like PES 2016) benefit a great deal from this.

On 30 July, Bhatti suggested in a new tweet that the PC version might get more attention “next year.” Update May 2017: Turns out it will. PES 2018 will at least give the PC version parity.