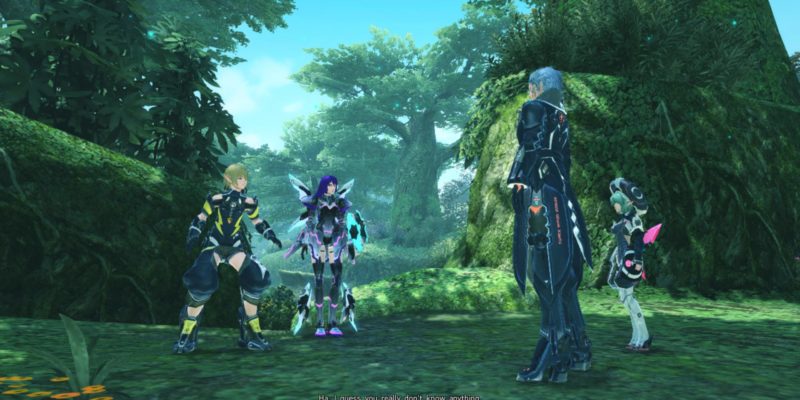 I can’t believe it took nearly eight years for Phantasy Star Online 2 to get an official Western release, but here we are. I dumped hundreds of hours into the game years ago on the Japanese servers, and while I was very taken with it then, time has been less than kind to it. Once you add in the new problems included due to the Microsoft Store, you’re left with a worse version of a dated game that’s nearly half a decade behind the easily playable Japanese version.

The basic premise of Phantasy Star Online 2 is that you’re a fresh recruit in the ARKS organization, which is fighting off an invasion by the Falspawn (unfortunately known as Darkers in the original Japanese). The North American version currently has the first three episodes of the story available, with episodes four and five supposedly coming at a later date. For reference, episode 4 debuted in 2015. I guess they thought it’d be okay to give people time to catch up.

While the story used to be unlocked by completing obnoxious objectives in the field to unlock squares on what was known as the Matter Board, now all you have to do is select story quests from the menu. These are made up of cutscenes and levels to play through that advance the narrative, that is — if you even want to do the story. It gives you some useful gear, but it’s also boring, and punctuated by stiff, awkward cutscenes and poor character animation. 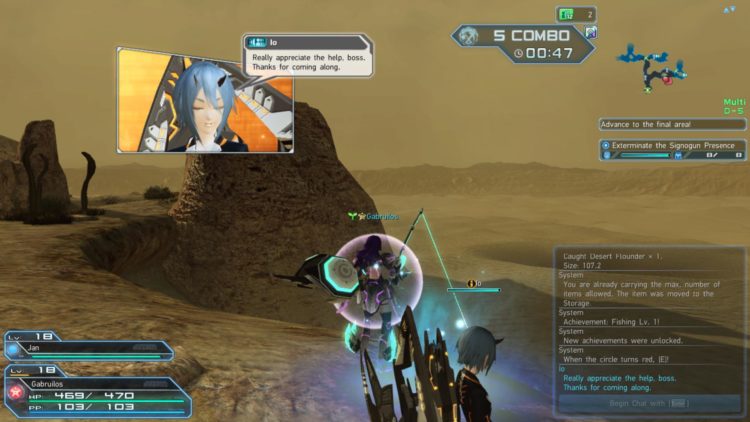 That also applies to the game’s visuals as a whole. Phantasy Star Online 2 wasn’t exactly a great-looking game when it originally launched in 2012, and it looks downright archaic now. Character models are basic and doll-like, and the environments feel small and lifeless. The available anti-aliasing is FXAA, so the game can often look truly terrible. While most enduring online games get some sort of makeover to keep things fresh, this one didn’t. I tried to enhance the visuals with the Radeon Software, but it can’t detect the game due to its being a Microsoft Store app. I had to put Reshade on it to make it look bearable.

The general structure of Phantasy Star Online 2 is questionable at best. Barring the story, early progression is based around going into exploration fields for each zone and completing them to unlock access to the next ones. These are made up of two randomly generated areas followed by a boss encounter. You can choose to rush through to the boss battle to get it over with, but there are random events to find where you’ll interact with NPCs, fight waves of enemies, or even fight boss monsters.

It doesn’t take long for the game to feel like a bit of a pointless grind, but the combat is still as fun as ever. There’s a wide variety of classes and they generally feel quite different from each other. Some classes focus on using melee weapons to smack your foes around, while others give you ranged weapons. My favorite class, Braver, mixes the two by giving you a katana and a bow. The weapons are fun to use and the combat is more fluid and technically proficient than tends to be the case in these sorts of games. 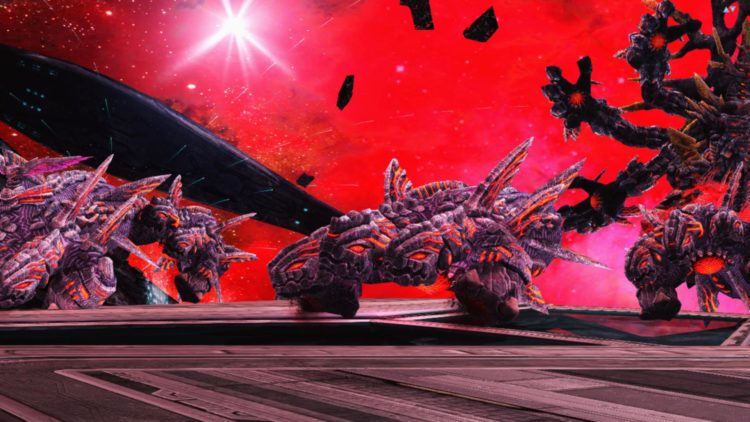 You don’t just wail on things, either. You can dodge, parry, utilize perfectly timed strikes to do more damage, and make use of a large host of Photon Arts. Photon Arts are dropped by foes and can be learned by selecting them in the menu. Then you just open up your subpalette and put them in, and you can use them in battle. Leveling up naturally nets you skill points that you can use to put into skill trees that build up your character. One neat thing that Phantasy Star Online 2 does is that it also has subclass versions of the main classes, which allows players to build their characters in more specific ways while simultaneously leveling a second class.

This is the end, friend

But what would an online game like this be without a solid endgame? Well, funny story, but Phantasy Star Online 2 doesn’t have one. The only real goals that will pop up are new weapons that come tied to events where you have to beat a certain urgent quest. You’ll do this so the boss will drop items that can be used to exchange for better weapons. But that’s only helpful if you want to turn the difficulty levels up as high as they go. The game’s urgent quests are fun, though.

Every day has multiple scheduled urgent quests. When it’s time, you just walk up to the quest counter and accept one. These can net you better gear, but once you get to a certain point you’re only going to get a bunch of crap you don’t want that’s just used to improve the weapon you’re currently using. Upgrading weapons is one of the game’s biggest grinds as paying for the upgrades gets very expensive at higher levels. But if you get pulled into the game, you’ll get around this by joining an alliance that runs time trial quests every week to keep you flush with cash. 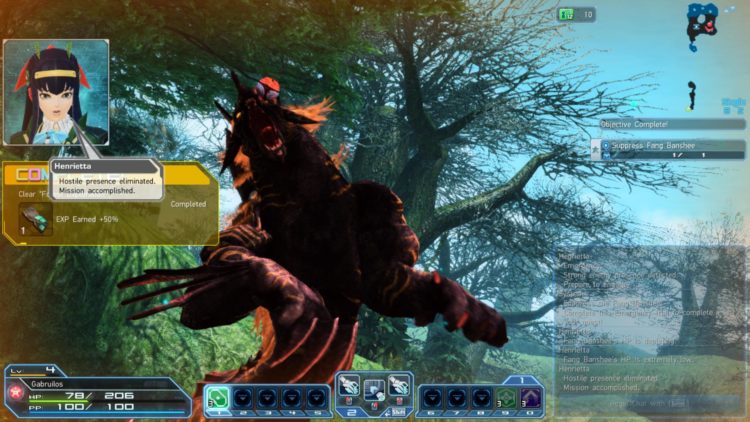 Speaking of cash, Phantasy Star Online 2 is free to play, and this is one of those games where there isn’t any pressing need to spend any money. That being said, your inventory capacity is capped at 50 slots by default, which is extremely small and you’ll need to buy inventory expansions with ARKS Cash to make it larger. ARKS Cash is also used to buy scratch tickets that can net you new outfits from specific series. As this version of the game has only been around since March, however, the outfit selection is low and the prices to buy some of them with in-game currency on the player marketplace are ridiculous.

Not here to stay

Other than all of that, the biggest objective in Phantasy Star Online 2 is to level up all of the classes. Each time one hits level 75, your character gets a permanent bonus. I still enjoy the combat and have fond memories with the game, but it’s fairly hard to recommend to new players in 2020. Although I jumped back in for a dozen hours or so to get the lay of the land, I don’t feel compelled to get lost in this game again.

And even if I did, I’d play the Japanese version, as this one still has some kinks that need to be worked out. Many people can’t even play the game, and those that can get hit by a bunch of giant issues. For one, there’s a ton of lag on the ship. Players found a workaround already, but the professionals apparently couldn’t be bothered to fix it themselves, despite its apparently being simple. I also had an issue where the game wouldn’t let me accept quests due to a glitch during matchmaking.

Most people who were curious about Phantasy Star Online 2 tried it years ago. And players who have stuck with it since can’t move their characters to the new servers and would find less content even if they did, so it seems like a case of too little, too late for the game. At any rate, it was still cool to play the game with everything being in English for once. 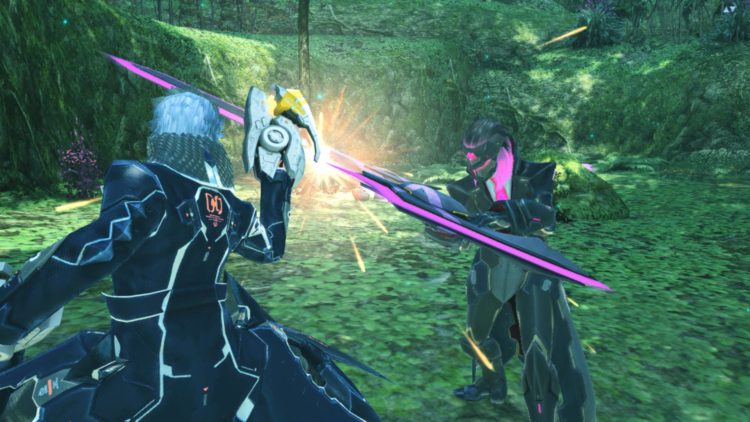 Extremely dated and worsened by a clunky interface and missing content, Phantasy Star Online 2 probably won't have much to offer to modern players who aren't already invested in its world.