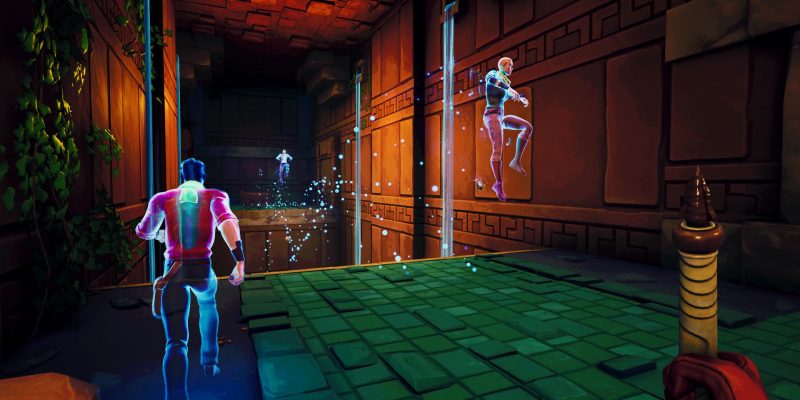 It’s always a nice change of pace when first-person games are about things other than shooting. Phantom Abyss, a new asynchronous multiplayer platformer courtesy of publisher Devolver Digital, is set to launch in Early Access this June. If you’re so inclined, it’ll also be coming to GeForce NOW. The latter still requires that you own the Steam version, so I guess there’s no reason to specify that. The game is looking all kinds of fantastic, so it seems like the right time to start getting hyped for when it’s available and I find myself dying horribly for hours on end.

Phantom Abyss thrusts players into procedurally generated temples with the goal of obtaining relics. Naturally, said temples are filled with perilous traps. Bottomless chasms, spiked hallways of death, and giant spinning blades are just a few of the nasty surprises waiting to cut you into tiny pieces. But you won’t be dying alone. You’ll be able to see the specters of other players who have trod the same paths as you, giving you some insight into how you’ll be surviving the perilous predicament in which you’ve found yourself. But do take care, for when you meet your demise, that temple will be lost to you forever.

Can you survive the Phantom Abyss?

As you explore the temples in Phantom Abyss, you’ll acquire keys from chests that are used to go deeper into the dangerous temples. There you’ll find better relics, but larger threats. You’ll also find treasures that can be offered up in exchange for blessings. So, it’s a platforming rogue-lite. I’m good with that. Collecting these treasures will extend your own abilities, such as granting a double jump or lengthening the duration of your slide. You also have a whip, which can be used to swing yourself around.

The more I talk about this game, the more I want to play it. Check out the trailer and you’ll see what I mean.

Overwatch 2 multiplayer changes to 5v5 teams with one tank