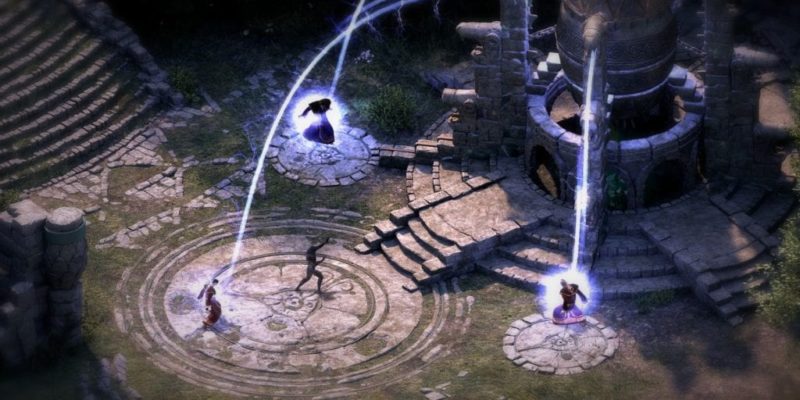 The latest patch (1.06) for Obsidian’s Pillars of Eternity has been released today through Steam, with word that GOG and Origin versions will be patched “shortly”.

We’ll get to what version 1.06 brings in a moment, but the other interesting aspect of Obsidian’s latest update post is a suggestion of when there may be more substantial news about a Pillars of Eternity expansion.

“We just might (wink, wink… nudge, nudge) have some stuff to talk about after E3 (week of June 22nd,)” the latest update post reads, before adding “We’ll also have some really cool news to talk about with Update 1.07.”

Nothing too specific there, but things to look out for in mid-to-late June.

– Blacsonn was modified to have a focus gain multiplier (+20%) instead of a flat gain.
– Added the Flanking and Engagement entries to the Glossary. Also updated the Flanked entry to link to Flanking and Engagement.
– Minoletta’s Concussive Missiles AoE is now set to foe only.
– Lay on Hands increased from 1/Encounter to 2/Encounter. Base healing value was increased from 20 per tick to 25 per tick and Greater Lay on Hands increased from +7 to +12.
– Flames of Devotion was given a +20 Accuracy bonus.
– Spell Holding: Blessing Accuracy bonus reduced from +10 to +5.
– All Zealous auras set to the same size. This decreased the size of Charge, but increased the sized of Focus and Endurance.
– Bonus Graze to Hit rate added to Zealous Focus.
– Bonus Hit to Graze rate added to Zealous Endurance.
– Sworn Enemy will no longer call a hit reaction when applied.
– Endurance reduction on the end of Reviving Exhortation was reduced.
– Suppress Affliction base duration lowered from 15 seconds to 10 seconds.
– All Exhortations are now set to recover immediately.
– Reinforcing Exhortation now grants +25 deflection instead of +15.
– Hastening Exhortation lowered to 9th level (was 11th).

– Fixed an issue where a door in the Stronghold’s Great Hall could become locked after the Steward unlocked it. This is a retroactive fix that should fix a saved game on load.
– Fix for Against the Grain where you were able to convince Trumbel after convincing Sweynur. Players in broken states can speak with Trumbel to complete the quest.
– Entering Lle a Rhemen will now force an update to The Bronze Beneath the Lake to the proper step if it’s somehow been reverted to an earlier stage, allowing the Engwithan weapon container to appear.
– Fix for cases where hurting a Crucible Knight during the Forge Knight attack on Crucible Keep would cause Lady Webb to assume you had burned the bridges with the knights’ faction, thus forcing the invite to the hearings to come from Dunryd Row. This fix is also retroactive for cases where Lady Webb still waits to hear your word about getting an invite – head over Hadret House and speak with Webb to continue with the Crucible Knight’s support as intended in your playthrough.
– Attacking any main faction after acquiring their invite will now properly result in a quest update that asks you to talk to Webb about getting an invite in some other fashion (Dunryd Row support).

– Added the correct icons for items that were displaying an incorrect icon.
– Fixed a minor issue with Scripted Interaction images not animating correctly at times.
– When dragging items in the inventory, you can now see their stack counts.
– UI fix made for some localizations that were seeing text flow over their button’s bounds.
– Highlight shader will now properly render behind objects in the scene.
– Added notifications on skill level up that lets users know that skill points may be saved for subsequent levels.
– Spell bars now clear out correctly when users switch party members with hotkeys.
– Fixed a bug where the second line of an object could get covered by newly gained objectives.
– Fixed a UI issue where icons on an expanded spell bar could show blue or gold glows behind them.
– Added notification when a player attempts to target a spell or attack when Paralyzed or Stunned.
– Reordered spells and abilities on the character sheet UI. This was a fix to abilities being displayed under the spells category.
– Fixed a bug where placeholder icons might appear in combat tooltips.
– Suppressed effects on the party portrait icons now show their effects with a “suppressed” qualifier on tooltip.
– Added a “per X sec” clause to beam spell descriptions to indicate how often they hit.
– Transition icons will now revert to their non-glowing state if you attempt to transition, but click away before completing the transition.
– Stronghold upgrade “purchase” buttons are now greyed out when another upgrade is already in progress.

– Fixed a crash that some people were experiencing on startup. This had to do with Unity attempting to load a corrupted font.
– Fixed slowdowns that could be caused by certain network adaptors or programs like Hamachi.
– Fixed a problem where interacting with the ability bar in certain ways could disable mouse input.
– Fixed an issue where SFX were not playing properly on containers.
– Fixed a bug where Deceptive disposition was gaining ranks too quickly.
– Wolves now have an ambient animation for knocked-down state.
– Fixed an issue where grimoires were getting corrupted when sending a wizard to the Stronghold.
– Fixed Commander Clyver’s barkstrings to be hostile if the Keep is hostile.