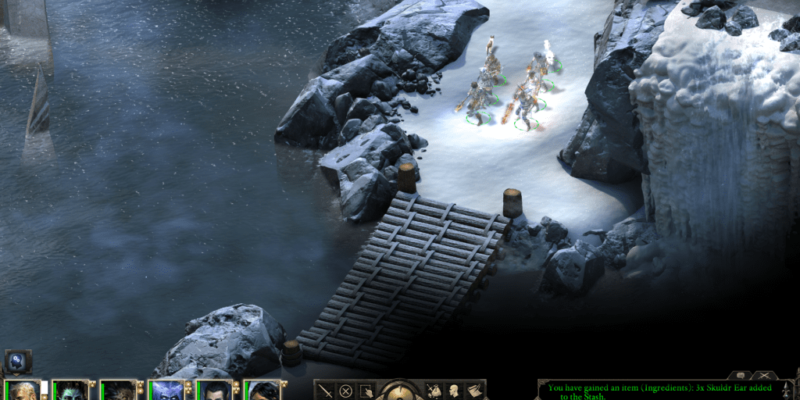 Time to gather your party in their winter woolens for one more excursion into the snow, as Pillars of Eternity brings the White March expansion (and most likely the game itself, to a large extent) to a close this week. This final set of quests provide a satisfying reveal for the carnage at Durgan’s Battery, deliver on the visions of cataclysmic rumbles in the mountains of the March, and probe further into the pantheon of thoroughly dysfunctional Pillars deities.

Part two of The White March also refines combat encounters a little more, and includes a couple of map locations with options of approach which nearly (but not quite) rival Raedric’s Hold.

Time has passed since your talented Insert-Class-Here entered Durgan’s Battery and re-ignited the White Forge within. Stalwart village has seen an influx of workers and administrators eager to exploit the new economic possibilities, resulting in the settlement’s mines finally being open for exploration. Tensions have been heightened by these rapid changes in fortune, but a far more ominous threat looms in your Watcher’s visions. 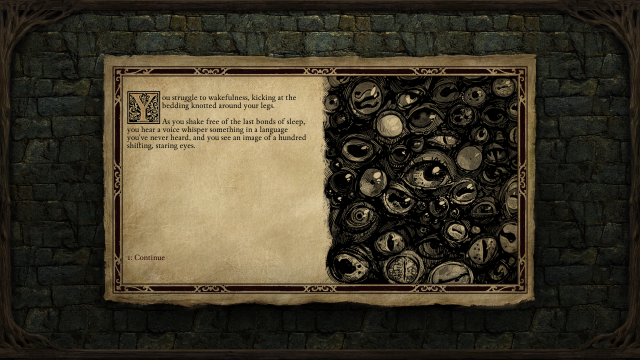 Oh, hello. You’re quite a looker.

The only person even remotely qualified to deal with the impending doom is your hardy protagonist, although that hasn’t stopped a Readceran commander with visions of his own setting up camp near the Battery.

Obsidian’s methodology for patching and updating the game means that all players will get the ‘3.0’ mechanical changes outlined in this video, so none of that business is strictly part of The White March Part 2. It’s still worth commenting on though. In part to distinguish it from the paid expansion, and in part because aspects like the Survival skill’s new relevance (you can choose specific defense and damage bonuses when resting, depending on your character’s abilities), did prove their worth during some of the expansion’s more testing battles.

The added quest-line about Caed Nua’s ownership is also a great deal of fun, featuring a pantomime aristocrat and his obsession with your stronghold. It culminates in a full-on pitched battle, commanded through the illustrated text format, and complete with rousing (or hilariously bloodthirsty, if you prefer) speeches.

Back to what is specific to The White March Part 2, though. The full range of classes is now represented among the named companions, thanks to the inclusion here of an Aumauan barbarian called Maneha. 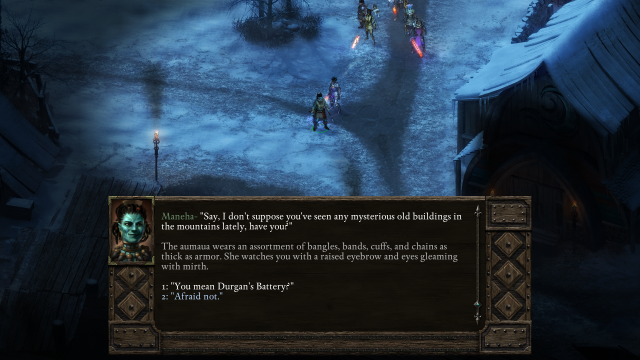 Helpfully, she’s not hiding inside a barrel of fish. Unlike SOME companions I could mention.

Like all of the companions, she has an attendant quest linked to her current profession (she’s had a few) as an Ondran ‘giftbearer’. Giftbearers, for those who don’t recall, are the devotees of Ondra (goddess of loss, tides), who collect symbolic tokens from people who wish to forget a particularly painful memory. It’s kind of a more spiritual take on the premise behind Eternal Sunshine of the Spotless Mind.

Maneha’s own troubles eventually intersect with the narrative progression of The White March Part 2, and lead the party to the Ondra-centric Abbey of the Fallen Moon. Her personal quest is a touch on the familiar side (Pillars isn’t short of amiable companions with darker secrets, and the resolution re-treads philosophical territory the game has done better), but the Abbey itself is a typically fine-looking map with some admirable variety in how it can be tackled. This goes beyond a binary “kill everybody / don’t kill everybody” choice, providing a couple of non-violent ways to achieve your goals (one of which is playing along with some Ondran rituals), and quite a few entrances and passageways for the more stealth-inclined to exploit. I was even able to plan out my escape route in advance and use it to avoid any meaningful conflict when matters went sideways.

The climatic choice in the area does feel a bit too binary (and, disappointingly, doesn’t draw much comment from Maneha; suggesting she’s not hugely devoted to her religion), but overall the Fallen Moon map(s) represent the best of The White March’s intentions toward player choice. There’s plenty of interesting world-building going on here too, surrounding both Ondra’s followers and her own divine activities. 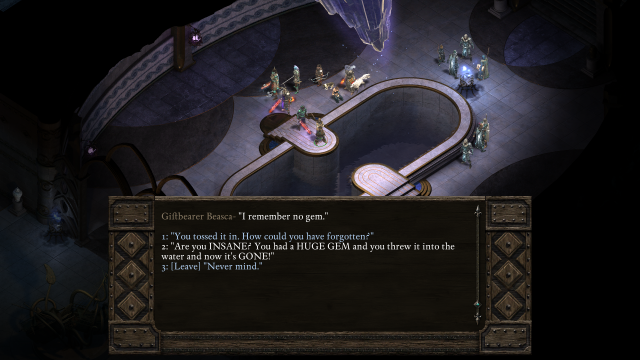 The White March narrative will lead players to the Abbey no matter what, but other, more side-questy activities will briefly take you back to Dyrford in a familial dispute, and out to other parts of the March’s wilderness in search of a wandering child. If you dealt with Concelhaut in the opening chapter of this expansion, then there’s a fabulous trip to a cultist-filled bog in store as well.

That latter mission is quite substantial in length (and merits its own map with distinct landscape), but perhaps the most in-depth auxiliary quest in this concluding segment is one I’d almost missed until making a second sweep of Stalwart village. Inside the mines (for, as mentioned, they are now working), strange incidents concerning the workforce have escalated to a grisly murder. The two map quest is a mixture of the cosily familiar (a mine level in a fantasy RPG!) and things more otherworldly (the second map, which I won’t spoil), and it works as a neat microcosm for the game’s overall ethos of combining nostalgia-tinged homage with the unique.

The entire second part of the expansion benefits from more crafted combat encounters, where terrain and enemy selections will force players to at least adjust their regular tactics a little. There are fewer opportunities to just lock down an entrance with Eder, and fewer haphazard roaming groups of monsters (creature placement seems more considered, and in harmony with location or story). Instead, you’ll have to deal with situations like being pined down by Xaurip archers and magicians on higher group, while trolls block your path (they’ve clearly been learning from Eder). Or scattering from the onslaught of the intimidating Eyeless; towering, slender golems with pounding hammers for hands.

I play on Normal difficulty, so bear in mind the caveat that such things may seem less impressive if you’re already a master of Path of the Damned. 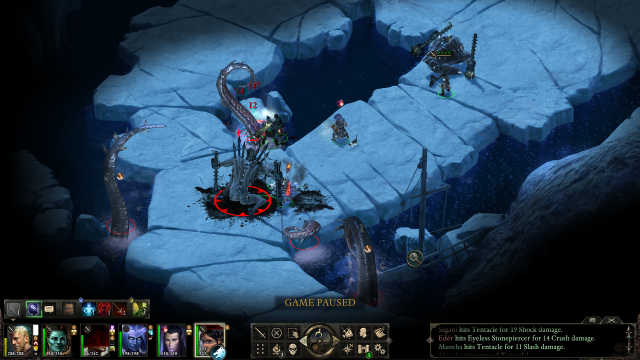 The Eyeless represent a significant challenge, but the manner of their difficulty also suggests that Pillars of Eternity’s combat system is pretty much at its limit. Eyeless hit hard, and brute-force their way into making players switch up tactics by being immune to basically everything. They will not be charmed, poisoned, confused, petrified, burned, or any of that nonsense (though, amusingly, their Reflex defense is relatively low, so the good old Slicken spell can still work wonders). This does force a definitive plan of action, and had me actually stacking my quick-use item bar with objects that could provide useful boons, on top of searching for specific spells that would muster better-than-negligible damage.

These foes appear for the climax of the expansion, by which point you may have some additional combat abilities and summons courtesy of any alliances you formed during the course of The White March. This is a welcome consequence for those who made an effort to be diplomatic throughout the add-on. One particular new ‘Soulbound’ weapon added in Part 2 is of great use against the Eyeless too.

For those who might feel their inventory of adopted companions was getting a bit feline-centric, there are a couple of non-cat pets to discover.

Part-way through the review process The White March Part 2 received a hefty bug-busting update, but by this stage I was already quite deep into the 10-12 hours it took to complete. For that reason it’s hard to say for sure which issues (if any) were a hangover from the earlier build. None of the problems were at all severe, but post-patch I did see Aloth standing around after combat and wasting all of his 7th level spells for some secret wizardly reason, poor old Itumaak slowly sliding around in a prone animation during combat, and a couple of overly-pyrotechnic spell effects that seemed to be caught on a loop and dragged my frame-rate down to single digits (before mercifully dispersing). 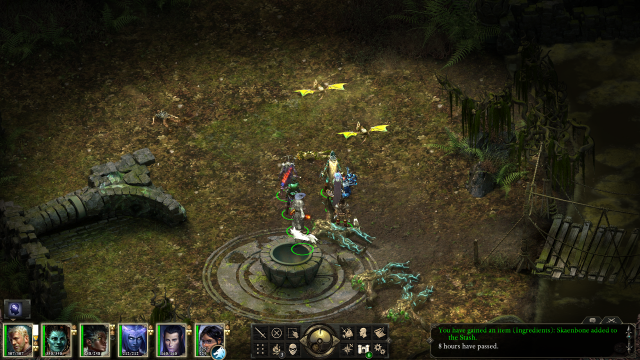 For change of expansion scenery, why not visit this lovely squelchy mire?

The White March does what most expansions should, and works within the existing game parameters to provide refined extensions of what’s on offer in the main title. It puts more thought into making each combat encounter more of a tactical challenge, and, in its quest design, exhibits some of the main strengths of Pillars of Eternity in offering different options of approach. Choices made during the opening chapter (and the rest of the game) have a reasonable impact on the climax too. It feels a touch strange to wrap-up the final, substantive part of Pillars of Eternity without it being the game’s actual ending, but that’s the nature of the mid-game expansion model. Though it won’t radically alter anybody’s existing opinion on the game, those who voted it as Best PC Exclusive of 2015 in our Reader Awards will be well sated.