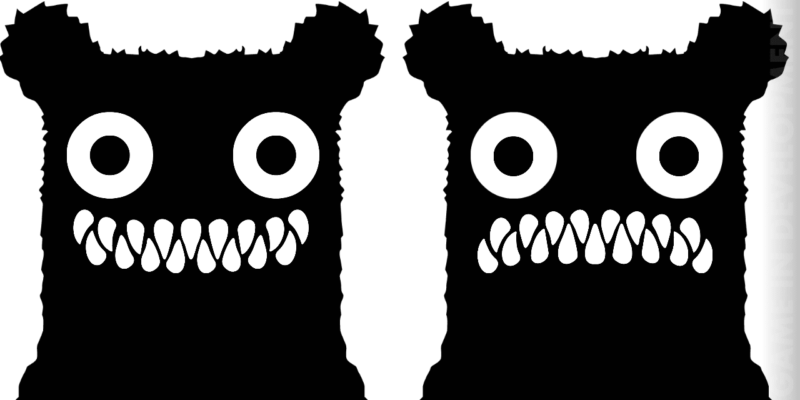 Having tackled medieval-ish questing alongside woodland animals with iffy stomachs, and island prisons controlled by cat bouncers, The Behemoth are now covering the next obvious topic. A society in the midst of a space-bear-apocalypse, in which hapless blueberry farmers roam the land looking for sentient cupcakes to press into mercenary service. What else would Pit People be about, really?

I suppose if you wanted to be slightly more boring about it you could summarise Pit People as a light (probably deceptively so, as we shall discover) turn-based strategy game where you control a party of heroes in an open, top-down realm full of The Behemoth’s outlandish design work and manic japery. Plus poops. There are always poops.

But that rather under-sells the inherent absurdity to be found in this closed beta build. 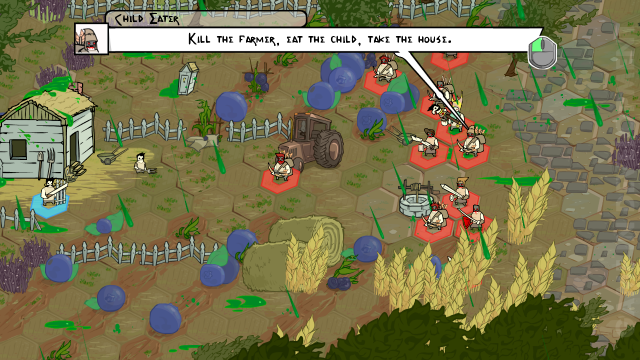 That seems a LITTLE unreasonable.

The technicolour tale begins with a reflective and, as it will transpire, rather megalomanic narrator (Will Stamper, reprising, in tone at least, his puppet-master Battleblock Theater role) noting the plight of a planet afflicted by acidic bear blood storms. He’s interested in tormenting Horatio, a loving father and gate-shield enthusiast, by crushing his son and sending rampaging hordes of bandits to mess up his farm. Not content with ruining just one person’s day, he then helps to traumatise the mace-wielding Princess Pipistrella by killing her dad and trashing the family castle via a proxy gang led by a chap named Helmitor.

Pip and Horatio inevitably team up, beginning a beautiful party-based friendship. Later, you’re joined by Josef (a demi-cyclops who performs a powerful, UI-conjuring SOUL BOND with Horatio), and Sofia; a curious Spanish-Japanese explorer type who enjoys putting people in cages. And thus a group of heroes are born, eager to … pursue whatever hopes, dreams, and goals they’ll end up striving for in this game.

Beating up Helmitor is the climax of the main closed beta quest line. Beyond that, Horatio probably wants to re-unite with his son (not as dead as expected, as it happens) and smack Stamper in the face with a sword for being such a jerk. Maybe put the realm to rights. You know, hero stuff. 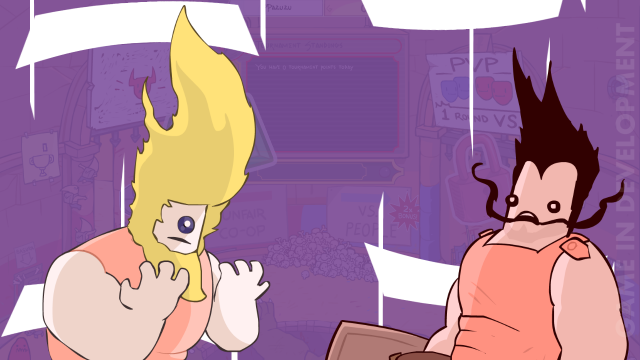 Pit People has plenty of sword-smacking. Mace-whacking too. And axe-tossing, arrow-firing, cupcake-frosting-lobbing. All of that. As mentioned, it’s primarily a series of turn-based combat encounters between your plucky band of idiot weirdos and other, even more strange bands of antagonists. You’ll face (and potentially recruit), spidaurs (spider-horse-human hybrids), ice-loving ‘firemen’, toxic gas farting mushrooms, cool 1980s surf dude types, and absolutely dozens of other magnificently odd Behemoth designs.

Like Stamper’s volatile narrator, you’re really only able to guide, prod and cajole your party up to a certain point. You can move them just fine, but if you leave someone next to two or more enemies, they’ll decide who to actually attack. Same goes for ranged fighters, who’ll just choose on their own who to actually aim towards. It’s possible to control this to some extent, by making sure your fighters are stood next to the one and only foe you want them to attack, or leaving your net tosser with only one actual target to go for; and that’s really where the majority of the positional strategy comes in.

Beyond positioning, Pit People throws in special attacks, abilities, and status effects. The closed beta probably only scratches the surface here, but manages to introduce helmets (damage reduction against all but blunt weapons), stun attacks, knock-backs that leave the target with reduced movement, poison effects (those damn mushroom farts), and the ever-helpful healing effects of sentient cupcakes. Enough to suggest that while the game seems pretty strategically light at first, it has depth to match its visual extravagance. 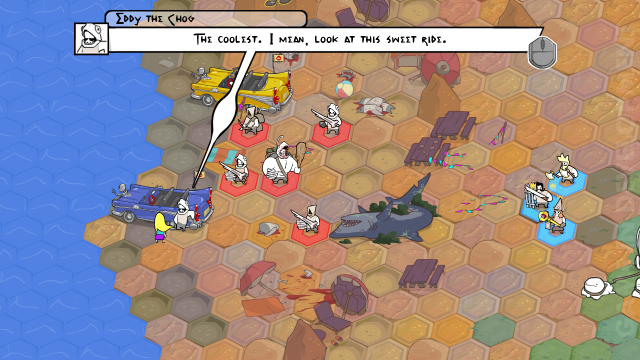 Fucking Eddy man. What a Chog.

The variety in enemy types is mirrored in the post-battle loot selection, which tend to supply your party with all manner of additional customisation options. New facial styles (Horatio now sports a pair of double shades), helmets, weapons (in several categories), and shields are all up for grabs. There’s a very loose medieval theme, but weapon choices quickly turn into more of a post-apocalyptic ‘use anything that works’ selection. One of my team is currently armed with a street sign, and another fires bowling balls out of a makeshift mortar. I’ve also seen hot dog arrows, giant sticks of dynamite, lolly-pops, and plenty of other unlikely weapons of war.

Finding fights (and thus potential mercenaries to add to your team of six) is a simple matter of leaving the home base city and trundling around the top-down-ish world map in your horse-drawn cart. It’s equipped with a cannon for stunning roaming fights you don’t fancy getting into, purchasable nitro speed boosts, and the ability to make your horses take a crap on demand. That’s either for pure effect, a Metal Gear Solid V homage, or a cunning way of leaving a trail of stinky bread-crumbs to follow back to camp. Or perhaps all three.

You take a mission (escorting somebody with a nervous bladder to Tinkletown, delivering lost leopards), set out, beat up some baddies, and return home with your lovely loot and some levelled up champions. Back at the central city you can customise your style, embark on pit arena challenges against the AI (accurately labelled as ‘unfair’) or another actual human, buy stuff at the local marketplace, and optionally team up with a co-op party for some wonderful, possibly fecal adventures with your pals. 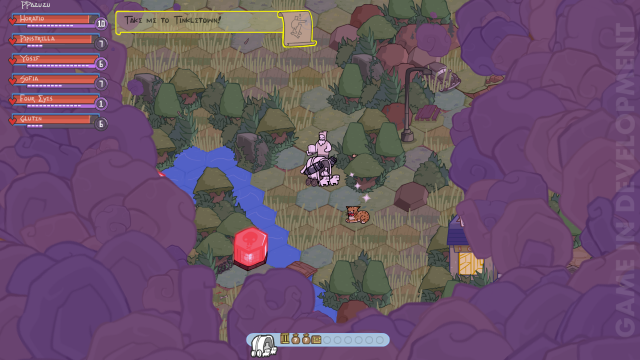 Like everything The Behemoth have produced to date, Pit People is high on style and has full confidence in its own incredibly stupid (and I mean that in the most positive way) tone. The world is in near-constant motion, echoed by some frenetic tunes that I’m fairly sure are at least partially constructed from strange vocal noises being made by the developers and/or Stamper. Every quest, creature design, and catchy snatch of score is tilted towards coaxing a laugh, or at least a goofy smile.

The closed beta offered enough to imply that Pit People’s combat encounters will steadily introduce further challenges too, though that’s the aspect that’s rather more difficult to conclusively judge from a limited look. I don’t think it’s shooting for super complex XCOM-on-harder-difficulties level strategic ponderings, but so as long as the game keeps dropping in foe-specific status effects like freezing, poisoning, and the like, it’ll stave off repetition. The sheer variety of enemy types and little weapon trinkets will go a long way to ensuring that as well.

After spending a few hours with Horatio, Pip, and their oddball comrades, I’m ready to … well, I still don’t quite know what the ultimate goal will be here. But whether it’s ridding the realm of a sadistic narrator, improving the weather (bear blood is truly awful for the skin), or completing my extensive cupcake frosting collection, I’m pretty ready for it.

Pit People is coming to PC ‘Before the Apocalypse’. That’s the official release date.