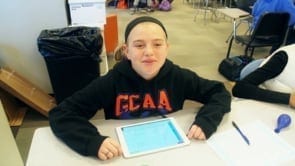 Budding game designers from all over the world can download Floors for free from the App Store today.

Floors allows anyone to draw and share their games with other users—with no coding required. The Pixel Press sketch guide, a pencil, and the Floors app are all that is needed to unlock the creative potential of game enthusiasts of all ages. Unique games are created and played through a simple four-step process: draw, capture & test, design, play & share. Not only can the app turn the drawings from paper into playable, shareable video games—but creators can also start building games right away using the Draw-In-App feature.

Floors was created by Pixel Press, a startup based in St. Louis, Missouri that was successfully funded thanks to more than 2,250 Kickstarter backers–raising $109,000 last June in order to build the Pixel Press ecosystem.

“This is the first step in the Pixel Press journey,” says Robin Rath, co-founder of Pixel Press. “With Floors, we are delivering on the Kickstarter promise of drawing your own platformer. Whether you grew up on classic platformer games and dreamt of one day creating your own, or are interested in a completely new mobile gaming experience, you can now download Floors and get to work on your first hand-drawn video game.”

Users begin by downloading the free sketch guide from the company’s website. The guide details the different shapes (“glyphs”) that can be translated into game elements. For example, a coin is drawn as a plus sign, simple boxes are terrain, and an equal sign can mark where the player will start in the level. Once the game is drawn, the user holds the iPad parallel to the sheet of paper so that Floors can capture the drawing; as soon as it recognizes the grid paper, it automatically takes the picture and turns it into a playable video game level. From there, the user can customize the design/gameplay of the game and playtest it before submitting it to the Pixel Press community (the Arcade).

It is also possible to download the app and just enjoy playing levels uploaded by other users. The Pixel Press Arcade allows everyone to “like” levels, and it also displays the number of times a level has been played.

“The Arcade is one of the most exciting elements of Floors,” says Josh Stevens, Pixel Press Community Manager. “As a player, I can scroll through and may see a level created by users I know—or I may see a level that looks challenging from a player who is in a completely different country. As a creator, I can share my level and see how many times others have played it, which is an incredibly exciting experience.”

The Pixel Press team has been working alongside the GCAA Makerspace (Grand Center Arts Academy) for the past few months on a weekly basis. The idea was to incorporate Floors into the curriculum, which was built around Stanford’s Design Thinking Process:

“Pixel Press is a very promising and radical educational development – and I’m incredibly excited to see its first release, Floors,” says Andrew Goodin, Makerspace Teacher at Grand Center Arts Academy. “At Makerspace, we believe that if students are able to put themselves in the shoes of the players, then they will be able to design better games. Pixel Press is instrumental in this iterative, constantly evolving model of education. Once our students create their levels in Floors, for example, they write down the feedback they receive from each other and also from the Pixel Press team. Being able to make different design choices on the go, and without any programming, is priceless.”

Pixel Press is being marketed as a powerful educational tool–one that can effectively promote game development and digital inclusion to users all over the world. The company strongly believes that projects such as the one from GCAA Marketplace are just the beginning.


Eador: Masters of the Broken World Gets Free DLC Entitled ‘Sacred Gift’, 75% Off for Limited Time