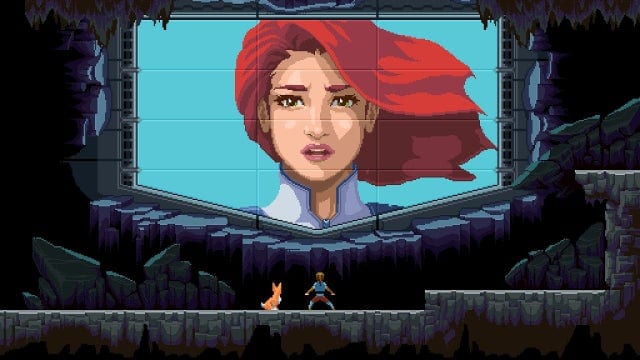 We reported on the announcement trailer for Savior back in July, and the game showed a lot of promise. Today, developer Starsoft Entertainment announced a Kickstarter campaign for it. It’s already raised over $10K out of its $48K goal. The announcement also includes a new extended trailer, which you can see below, showing more pixelated art goodness. If this sounds like your cup of tea, you might want to head over to the Kickstarter campaign page and make your pledge of choice. You can start with a paltry $5 pledge, or commit to up to $2500 if you can afford that.

The new trailer is much more story-driven than the announcement trailer, which you can see here. Granted, there’s still quite a bit of action, but the introduction presents an interesting premise with some gorgeous art and animation. We also see that the game will include dialogues, so it looks like it will have some RPG elements as well. From what we’ve seen so far, the story doesn’t seem hackneyed either. It looks like a unique take on science fantasy, featuring both a dragon and a mecha.

Kickstarter will save Savior

According to Starsoft founder Weston Tracy, the studio really needs the Kickstarter funding to take the project toward completion. “We’ve been funding this project with our own savings for the last few years by working side jobs to keep the lights on. Additional funding will help us move development forward at a much faster pace. Savior tackles some potentially controversial themes, like rationalism versus dogma, and we believe that Kickstarter is the best way to fund the game’s development while not having to water down any of the ideas we’re hoping to address.”

So if you’re looking to support the developers of this potentially great game, make sure to check out the Kickstarter campaign. More information about the game is available on the official website. You can also wishlist it on Steam.