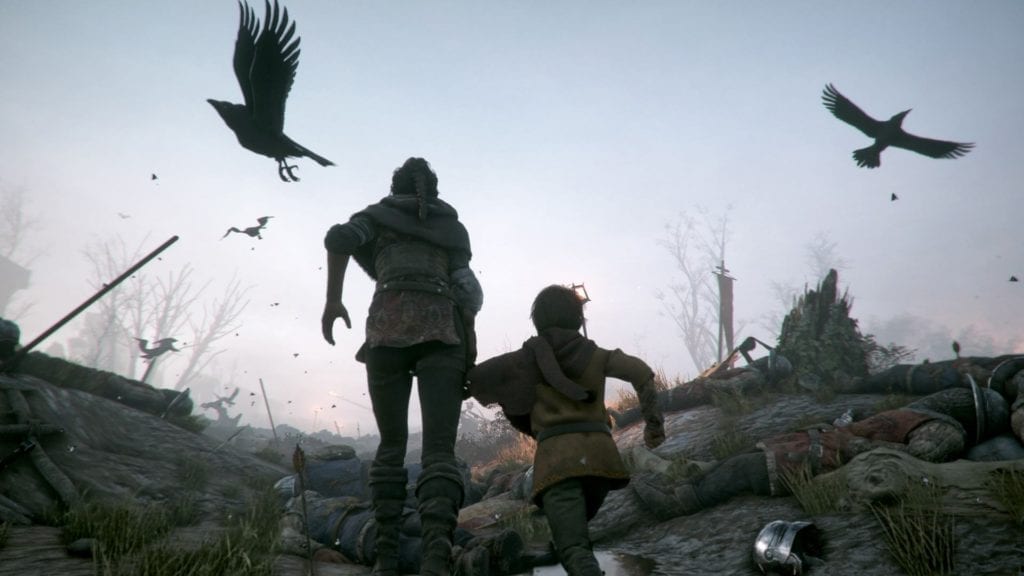 A Plague Tale: Innocence is one of those games that quickly pulls you in with its beautiful graphics, combined with a dark atmosphere. There’s also a wonderful cast of main characters, all children who have suffered loss and pain. Together, they go through a number of tender moments along with some truly tense ones. I just wish they were all in a better game.

Set in France during the height of the Black Plague, players take the role of Amicia, a teenage girl who happens to be a dead shot with her sling. Chaos descends on the seemingly idyllic household when an Inquisition arrives to take her younger brother Hugo away, believing him to be the cause of the sickness plaguing the nearby villages. Soon, the siblings are pulled into a world of murder, supernatural conspiracies, and revenge, tied together with a seemingly endless ocean of killer rats. 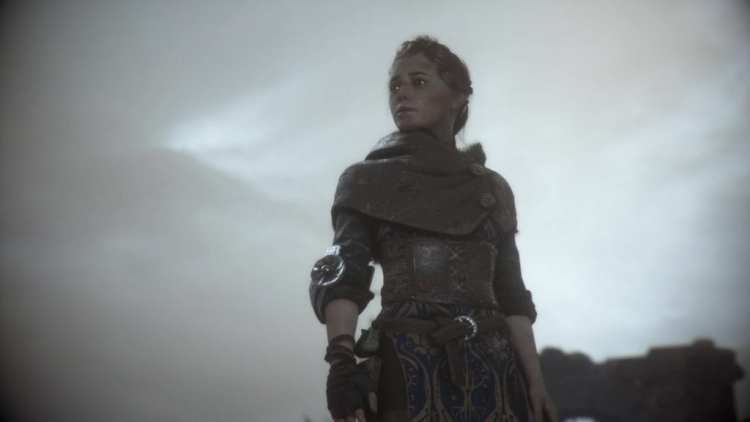 Although Amicia quickly grows comfortable with killing, she still ends up being a relatable character.

As I noted in my preview of the game, A Plague Tale treads a fine line between being edgy and creepy. Although though it can be shocking to see a grown man bludgeon or impale a teenage girl without hesitation, I was able to come to terms with it after a while. The problem with the game isn’t necessarily the violence, but rather how it’s presented alongside the stealth and combat gameplay.

The stealth gameplay proves so-so at best and boring at worst. It features the usual tasks of spotting enemies on patrol, throwing objects to distract them, and sneaking past them. Lights and shadows don’t play a significant role apart from keeping the rat swarms at bay, and enemies may sometimes inexplicably spot you through objects. 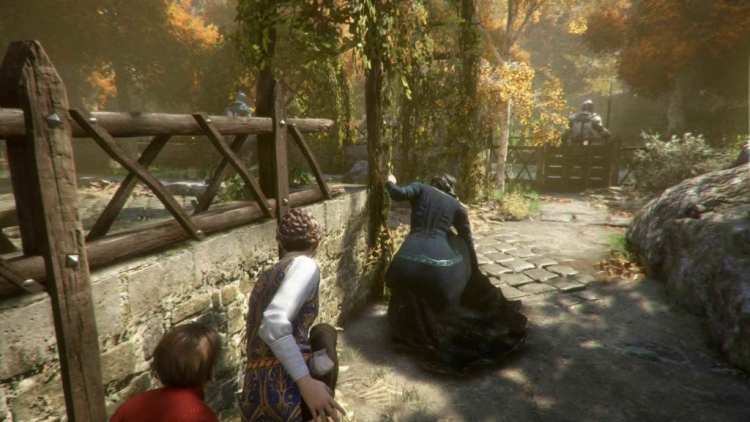 Stealth is a major part of the game, but it isn’t very challenging or satisfying.

Later on, as Amicia picks up more skills, she’ll can physically take patrollers out by shooting them with her sling and set up literal rat traps.

Except this gorgeous world isn’t necessarily an open one. Sure, players may decide to head in one direction instead of another to reach an exit. However, almost all the stealth missions are based off a linear path within tightly enclosed spaces, meaning that your decisions pretty much come down to whether you want to sneak on the left side of a hallway or the right. That’s when you even have a choice. Most of the time, the game already has a single path laid out for you. You just need to spot it and maybe figure out some puzzles along the way.

Without a wide range of options and routes which franchises like Assassin’s Creed, Tomb Raider, or Deus Ex might offer, much of the tension and creativity gets lost. Stealth becomes considerably easier once Amicia can quietly use her sling to kill off soldiers, who almost always patrol or stand at posts alone.

Supernatural elements soon come into play in the form of gigantic rat swarms that consume everything across the land. Over half of A Plague Tale involves finding creative ways to get past rats. You’ll do this by climbing to higher ground, using torchlights, and solving puzzles to drive them away. Eventually, rats end up everywhere, and they’re pretty much all you see.

But even though a massive rat swarm starts off as a horrific concept, exposure eventually transforms it into a semi-comical one. This is largely due to how the rats don’t move naturally, have stiff tails, and become less natural the further you progress. At one point, I was chased down by a tiny tower of about eight rats with perfectly aligned tales that somehow rammed into Amicia’s back like some sort of weird Lego brick-shaped shotgun blast. 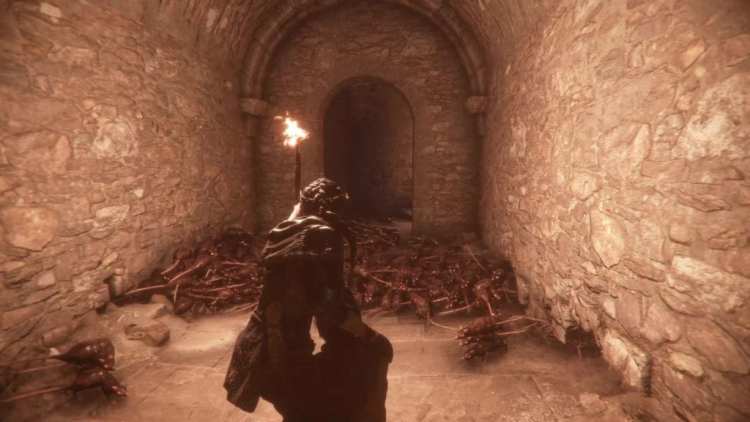 When you’re not sneaking past Inquisition soldiers, your time is spent keeping killer rats at bay.

There are also times when it’s unclear where the light border ends and how many rats it takes to consume Amicia. Sometimes, she can safely walk past a small handful of rodents. Other times, they’ll miraculously multiply and gobble her up on the spot.

Invisible walls, unclimbable objects, and the inability to jump add to the frustrations. After several deaths at the teeth of killer rats, I began to question the game’s logic. Like, why can’t Amicia grab more than one fast burning branch? Why are these Inquisition soldiers so willing to walk through an ankle-deep sea of killer rats, with nothing but a little lantern for protection, to stab a little girl? You’d think having a rat plague surround them each night would cause them to go AWOL. As it stands, they don’t even react when a soldier standing next to them gets eaten alive.

Unfortunately, that’s kind of how I ended up feeling about the game altogether. A bunch of photosensitive rats can only scare you for so long. You can only witness rats consuming you and your friends so many times before it grows old. It doesn’t matter how relatable the characters are.

Amicia, Hugo, and the gang

As stated earlier, A Plague Tale: Innocence features some spectacular, well-drawn characters. While Amicia and her friends are easy to relate to, Hugo is a slightly different story. As a sick little kid who is prone to migraines, he often becomes the focus of the narrative. That’s fine when players are escaping from one deadly situation to another, but it’s tough to overlook how he’s often there to get into trouble whenever he’s not a puzzle-solving tool. 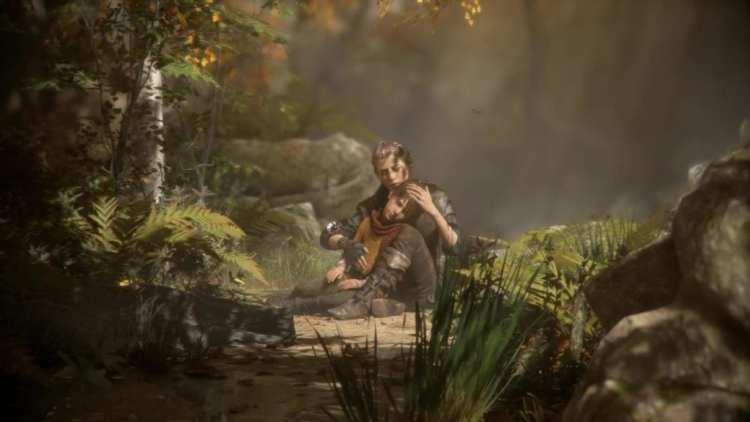 The gameplay drags down plenty of gorgeous, touching moments.

For instance, Hugo randomly starts banging a hammer on the floor while hiding from Inquisition soldiers, leading to the first boss fight. This pretty much sets things up in a predictable arc. You can bet that something will happen that will cause Hugo to wander off, despite him being a sickly eight-year-old who has been captured multiple times. This will inevitably lead to some sort of catastrophic event. The game does not defy expectations, and I managed to guess most of the major plot points within a few chapters.

A Plague Tale would have benefited from a few more role-playing elements, such as having one-on-one conversations with friends or maybe going on some side missions. I would have been happy with more command functionality, like telling individual characters where to go instead of just having the basic “follow me,” “stay here,” and “interact with that scripted thing” orders.

With the exception of some scripted moments and exploring for crafting components, the game is dedicated to telling a linear story. The puzzles aren’t too challenging, and there are usually clues to help draw your attention to points if you get stuck along the way.

Apart from the ever-growing rat swarms, the most dangerous enemies in the game are the Inquisition soldiers, who are all bigger and stronger than Amicia. Luckily, they’re not particularly bright and will usually walk straight at players. This makes it easy to take them out with a rock thrown at their heads – David and Goliath style. 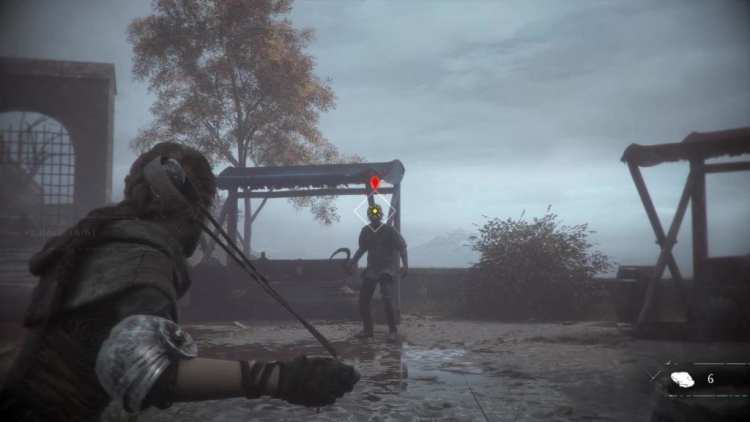 Amicia always goes for the head.

The trick is to not let them get too close, as Amicia is defeated in one hit. Oftentimes, it’s not about being hit, it’s about keeping enemies from getting close enough to trigger a fixed hit/kill animation. This pretty much makes the dodge function useless and creates some of the most annoying boss battles ever.

What’s infuriating is that Plague Tale’s first boss battle is all about dodging and striking back. Afterward, the game tosses dodge opportunities out the window until the final boss encounter. Even the concept of stealth gets a little lost during these boss fights, despite how the large majority of the game is stealth based.

For instance, one boss homed in on me like a magnet no matter where I was hidden. It didn’t matter if I put out torches or crept around quietly in the dark. He always knew my location and could spot me from clear across the level, following me while I scrambled to figure out where he was. Then he would suddenly show up from behind and run me through with a sword. Each death meant that I had to restart the entire boss encounter. 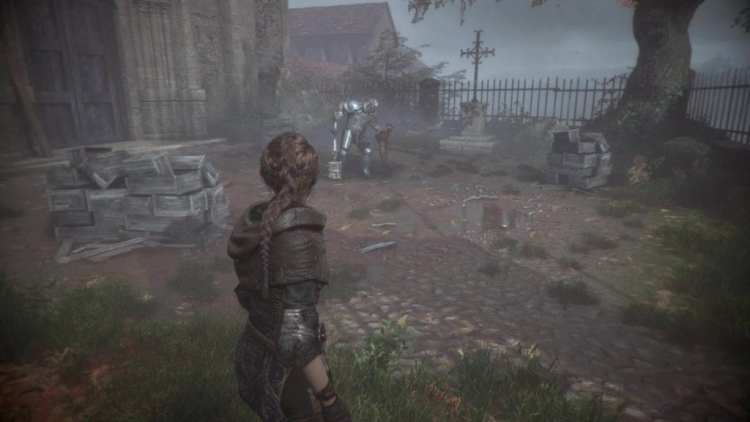 To make things worse, these fights hardly give players any breathing room for crafting ammunition or changing to different ammo types. Then there are the times when specialized ammo inexplicably stops working.

Without spoiling anything, the final boss encounter is a massive battle with so much going on that, at one point, I wasn’t sure that I was winning. At the same time, almost all the equipment Amicia acquires during her adventure stops working. Fiery stones, helmet melting powder, and rat-destroying mega blasts all become useless.

This all builds up to a so-so ending that’s neither happy nor sad and leaves more questions than it answers.

Getting over the plague

A Plague Tale: Innocence starts off with plenty of potential as a character-driven, stealth-based, supernatural horror adventure game. However, the gameplay isn’t deep enough to keep things interesting. Although it does an impressive job with its setting and characters, they’re not enough to overcome the slow and predictable nature of its missions and some of the major plot elements.

Although A Plague Tale: Innocence features spectacular artwork and excellent characters, they can't make up for the boring, predictable gameplay.

Valve making its own version of Dota Auto Chess

Gameplay video and screenshots for GRID 2019 are now live