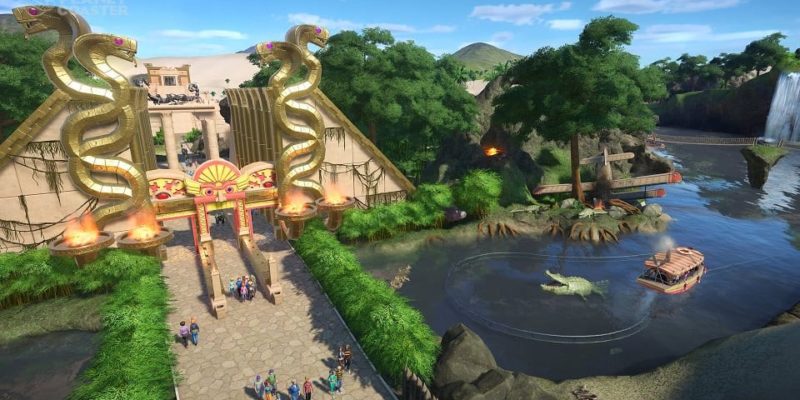 Frontier will be releasing another slice of Planet Coaster DLC soon with the new Adventure Pack.

This new pack will bring a load of jungle-themed content with wild animals, a new jungle-themed wall set with static and animated attachments, special effects, shop and path extras, doors, fences, animated scenery and triggered coaster doors, and signs.  A new entertainer character will also be joining the park crew, Renee Feu, the queen of the jungle.

Three new themed rides are being added. Gold Fever which is a mine coaster, the Island Adventure high capacity boat ride inspired by old steamers, and finally the Land Ahoy which is a smaller version of the ISland Adventure which doesn’t need a large body og water but instead has its own channel.

The DLC release will bring updates to the base game with quality of life improvements such as UI tweaks and vista points.

Anyone looking for a bit of Indiana Jones of Mayan temple action in their Planet Coaster parks then this is one to grab. It’s out on the 18 December priced at £7.99 ($10.99, €10.99). Sadly there’s no footage of the DLC released yet but there is a single shot which gives a rough idea of what to expect.

By Steven Wong32 mins ago
News