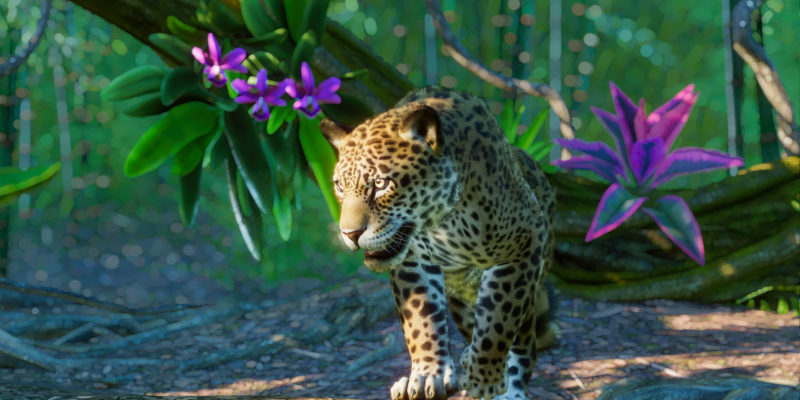 It’s official: Planet Zoo is getting a South American DLC pack. The first hints emerged when mossy and tropical rocks were announced for Update 1.2, followed by a range of Tweets with images of temples and llamas. Now, Frontier has announced that Planet Zoo‘s South America pack will arrive on April 7, the same day as Update 1.2.

What animals are in the Planet Zoo South America pack?

Let’s cut to the chase. Jaguars! We’re getting them! The jaguar was the most obvious and iconic choice for a South American DLC, but many other animals were on people’s wishlists. Here are the five animals (though one is an exhibit animal, so does that really count as much?) that Planet Zoo will introduce next week:

The llama was already quite obvious as well, since there was a literal shadow of one in Planet Zoo‘s latest tweet. Unfortunately, it does mean we won’t receive sloths, capybaras, spectacled bears, or maned wolves. Still, the popular giant anteater is part of the line-up. And can you really be disappointed when you see that cute capuchin monkey face?

The reception, so far, is mixed. While some players are excited to expand their zoo, others are annoyed that they waited three months for just five new animals for what they consider too much money. Since its release, Planet Zoo will have gained nine new animals (one of which is an exhibit animal) spread over two DLC packs for a total of $21. While the DLC also offers a bunch of new customization, the animals serve as the biggest attraction for many players.

On top of Planet Zoo‘s five new animals, a new DLC pack wouldn’t be complete without the ability to style your zoo to match it. The South America pack includes 250 new buildings, scenery, and foliage pieces as opposed to the Arctic pack’s 200. This even includes an Aztec temple zoo entrance, making it a little bit bigger than the previous DLC. However, there will also be new pieces in the free update coming that same day. That means you’ll have a bunch of new stuff to give your zoo a new look.

The DLC pack will be available for $10.99, and you can wishlist it on Steam right now. Of course, you’ll need to own the base Planet Zoo game in order to play the South America pack.