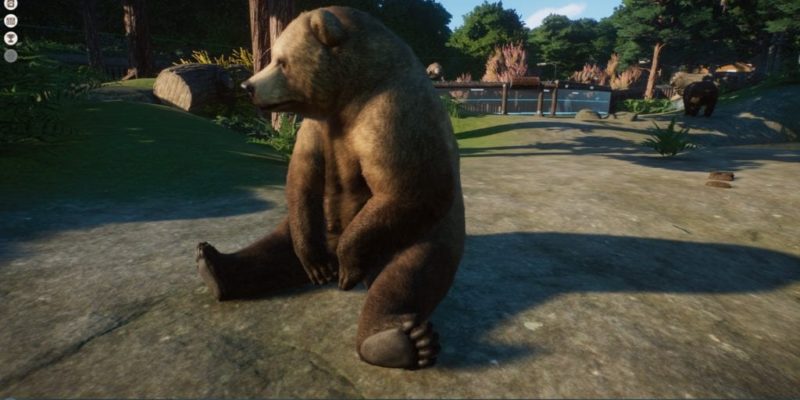 Frontier Developments has made a name for itself in the industry for its wonderful management sims. With a team comprised of staff that worked on the original Rollercoaster Tycoon, it only makes sense that the company would have a penchant for rekindling the joy of the early 00’s “Tycoon” boom. What was once a massively popular genre of games has kind of fallen out of favor in recent times, though obviously not with Frontier. Working off of the success of both Planet Coaster and Jurassic World Evolution, they have now graced us with Planet Zoo.

A spiritual successor of sorts to Zoo Tycoon (a 2001 sim that had a 2013 sequel developed by Frontier), Planet Zoo‘s beta period has been running for the past week for those with “Deluxe Edition” pre-orders. Containing a small sample of the available modes that the final game will have, I’ve been digging into the various aspects of Planet Zoo and am kind of blown away at their scope. This game is a lot more involved than I imagined.

Let me quickly recap what is available here. As noted a few weeks back, Planet Zoo’s beta contains the first scenario of “Career Mode,” a cut-down version of “Franchise Mode,” and a portion of the available buildings, rides, and staff members. It’s not exactly extensive but has enough to give you a feel for how Planet Zoo will play out. The main reason this beta is running is to nail down the interconnectivity of Franchise Mode, which features an asymmetrical multiplayer component. 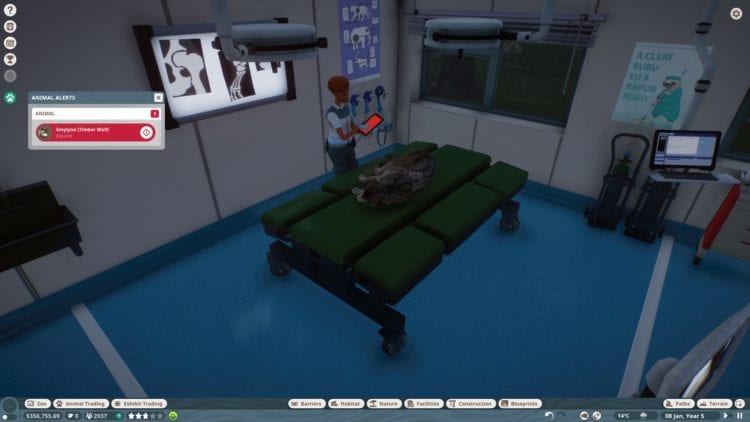 Starting off with Franchise Mode, I actually couldn’t get a lot of its features to work. This entire portion of the game requires you to have friends playing the game so you can trade animals and various buildings or staff members. Since I’m going at this alone, I was basically stuck. I was able to play around with the building tools and layout pathways, but I couldn’t do much else.

There’s a special currency you earn in Franchise Mode for completing different tasks (with the beta even running a community challenge to release lions back into the wild), but I wasn’t able to earn any of that. I could buy animals with in-game money, but I wasn’t able to place them around. It seems that the always-online nature of Franchise Mode will make it next to impossible for solo players to enjoy.

Frontier has seen the frustration some fans have had and will be adding a fourth game mode to the final version. While not launching alongside the game proper, this fourth mode will take the same aspects of Franchise Mode and adapt them for offline play. This will likely let players trade animals with NPCs and build up staff without needing to have friends available. Franchise Mode seems like it will be a good way to interact with your pals, but it is contingent on having an active friends list to make the most of. 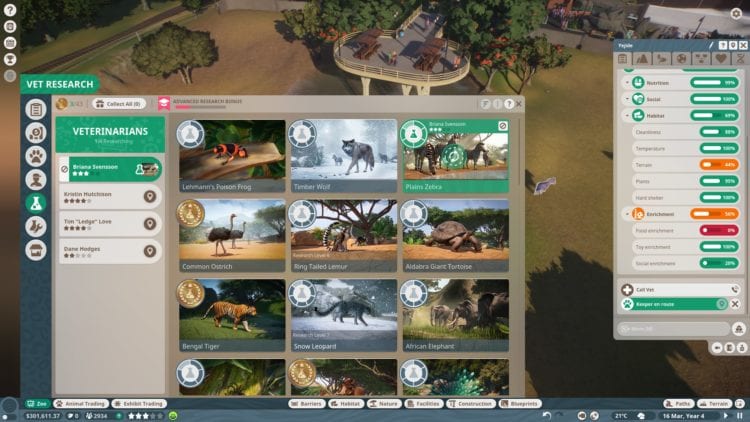 Thankfully, Career Mode’s demo has more than made up for the lack of playability in Franchise Mode. Taking a cue from Two Point Hospital, Career Mode tasks players with completing various tasks in an already finished zoo. While you will be tinkering with different habitats and even adopting new animals, the heavy lifting has already been done for you. You just need to aid the zoo in becoming better, which gives some proper motivation for exploring Planet Zoo‘s different systems.

Through Career Mode, you’re given an explanation for how to edit habitats, check each animal’s temperaments, plot out a pen, check which animals are compatible with each other, and manage finances. It’s a lot to take in, especially when you go into the “Edit” mode.

While Career doesn’t give you the full range of options, you still get a glimpse at how extensive Planet Zoo will go. I now understand why Steam Workshop support is available, as you can customize various buildings down to the paint job. Through Edit mode, you’ll place walls however you see fit, increase the height/width of each wall, rotate buildings to reach paths, figure out the location of them relative to animal pens, and even be responsible for hooking electricity up to everything. Planet Zoo is a real, proper management sim, and I’m sure diehard fans of the genre will love it. 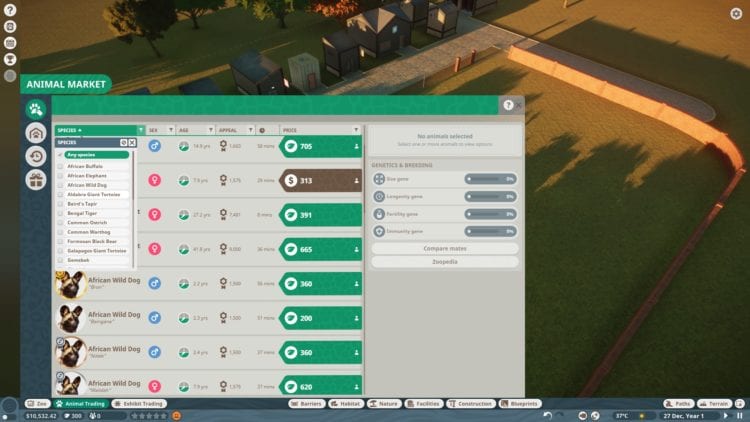 Career Mode is at least streamlined in its approach. Your objectives are clearly labeled and even pointed out to you, the narrator gives you proper instructions for how to accomplish your task, and everything feels like a guided tour for how to best play Planet Zoo. You’ll acquire stars once you’ve completed each set of objectives, with the ultimate goal being a gold star for the specific zoo. Nabbing that final star puts all of your skills to the test, which feels like a solid way to reward understanding of the different mechanics you’ve been messing with.

The final game will have a Sandbox Mode that allows you to modify every aspect of the game. You’ll be able to enable infinite cash, turn off animal aging, remove personalities and temperaments from the animals, and so on. That seems more my speed, as I was a bit overwhelmed by how extensive Planet Zoo gets.

As for how the performance side of things holds up, Planet Zoo isn’t exactly perfect. I was able to max out the graphics settings at 1080p on my GTX 1060 and Core i7-3770K, but there are a ton of pauses and hiccups when moving around the world. At one point, I wasn’t sure if the game had frozen or my mouse stopped working. I was clicking on a menu for upwards of a minute and was just about to force quit the game, but then everything popped back to life. 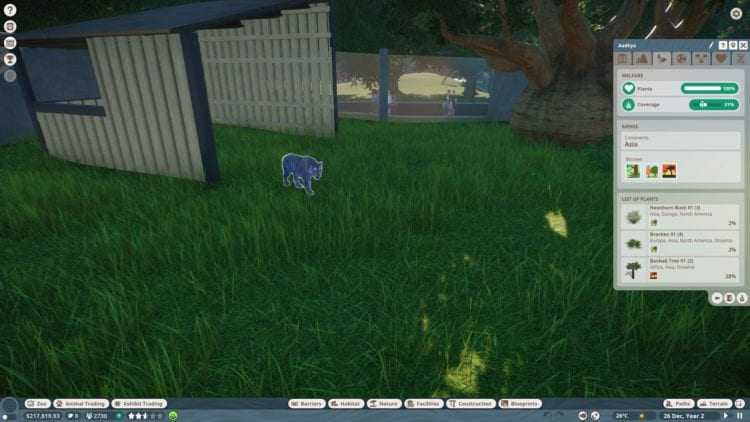 The framerate is stable enough, I guess, but I could obviously tweak different settings to get a consistent 60 FPS. For this type of game, I don’t think speed is really needed. You’re working in a diplomatic manner and contemplating each task for minutes at a time, so you don’t need to have blisteringly fast speeds. Planet Zoo does allow for uncapped framerates, though, so that’s nice.

I just wanted to see how pretty everything would look. Frontier has done excellent work with the visuals of each of its games, especially Jurassic World Evolution. That sense of wonder at seeing realistic-looking dinosaurs holds true for Planet Zoo. The very first objective in Career had me looking at a grizzly bear nest, and I just had to stop and stare a bit. It’s amazing how far graphical technology has come, especially with a game as unassuming as this one.

Funnily enough, the bear promptly sat down and took a poo, but I was still in awe of what I was seeing. That a game can capture the intricacies of animal behavior so well really lends a layer of immersion to the experience. Even when I’m being bombarded with various systems and mechanics, Planet Zoo is constantly a visual delight.

There’s definitely room for improvement (especially with Franchise Mode), but Planet Zoo is shaping up to be an excellent management sim. I don’t know that I’ll personally ever get on with Franchise Mode or even Sandbox, but I like that Career Mode doesn’t feel like an afterthought.