PlayerUnknown’s Battlegrounds has been selling like hotcakes for the past few months and it’s continued to be the best selling game on Steam each week. The game has now sold more than eight million copies which is quite something.

The rise in the game’s popularity has been highlighted in recent concurrent user numbers on Steam with the game being played by more people week in week out. This weekend PlayerUnknown’s Battlegrounds finally surpasses DOTA 2 for concurrent users on Steam. It’s been gaining ground on the DOTA 2 and CS:GO for a number of weeks, and thanks to continued sales, it finally reached the top today.

Recent numbers released by analysts NewZoo suggest that 25.4% of core PC gamers are playing PlayerUnknown’s Battlegrounds and it also appears to a game players keep playing while playing other games. It’s been a phenomenal success so far and players keep going back to it even if they are distracted by new releases for a time.

As of this morning, the Steam numbers look like this… 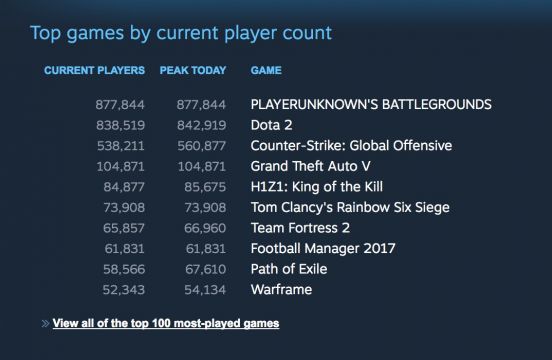 This weekend’s rise in popularity could be down to increased sales, it’s solid presence in Streams, and of course Gamescom where there were tournaments running.

By Greg Bargas9 hours ago0
News