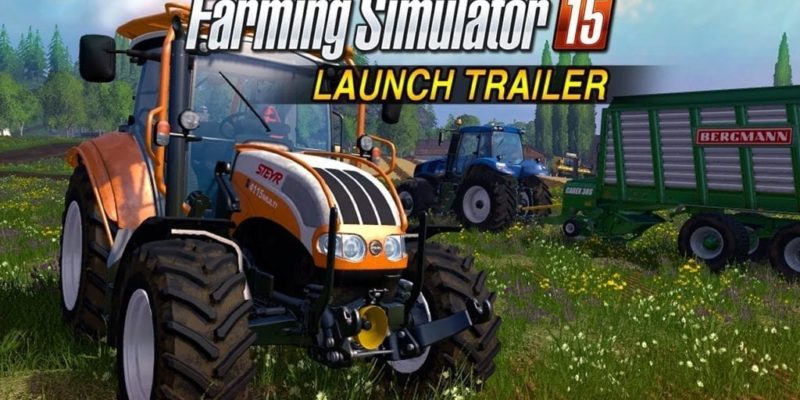 At first glance, Farming Simulator 2015 is a beautiful game. The attention to detail on the landscape, tractors, and farming equipment is sublime. However, once you really get into the core of the game, it becomes a drag. Don’t get me wrong, I love a good authentic simulator, but FS15 is too realistic for its own good.

For starters, it’s difficult to say that this game was really geared for the Americas (or North American market at that). In Europe, the Farming Simulator franchise has been a staple on the virtual agricultural fantasy. (If that’s really a thing.) For this new installment, it being the fifth addition to the library, you can start your career in the good ol’ heartland U-S-A. If you are new to simulators, or this farming one in particular, then you probably shouldn’t even consider starting in America. The brief, uninformative tutorial is only accessed by starting your career in Europe. Even without the almost useless tutorial, it is impossible to figure out what you are doing. The learning curve is extremely steep. It’s not the game mechanics that will stump you.

To be honest, the controls during gameplay are actually quite simple. It’s the actual art of farming that will throw you for a loop. Unless you already know how to plant, harvest, cultivate, and plow fields–you are in for a rough time.

Learning which equipment to use can be a daunting task, again, particularly for those who are not familiar with any sort of agricultural equipment that is used on an almost daily basis. The tutorial will walk you through the basic functions of each tractor and its abilities, but after that, you are on your own. At times, you might find yourself asking: “Where to begin?” or “ Where do I start?” These questions actually gave me a mini panic attack, thinking into the specifics and simulation factors of each given task. I don’t think I’ve ever felt so alone after playing through a tutorial.

A few hours into plowing a corn field, which will take you a good 20-minutes, my eyes began to glaze. The amount of time it would actually take you to do a day’s worth of farming in real life is approximately how long it will take you to do the same daunting task in-game. However, the way time mechanics work inside are a bit confusing.

While it will take me twenty minutes to plow a field, several hours will have passed in-game time. By that logic, it will take you several days in-game time to accomplish a task that took an hour in real-time. If you decide to hire help, your employees will work at a much slower rate. They will work based on the in-game clock. This tends to cause the economy of the game to be frustrating. Earning money to upgrade equipment is essential, but when your employees are working at a slower pace to how you play the game, you may be waiting a long time for a steady stream of income.

I don’t think I’ve ever felt so alone after playing through a tutorial.

Once you’ve overcome the learning curve, it’s time to upgrade your equipment. The catalog of farming tools and tractors is enough to make a good ol’ boy weep. The attention to detail is really quite amazing. This is one thing about FS15 that is truly impressive. Right down to the grit and muck caked onto a tractor is methodically detailed.
If there is one thing you’ll learn from this game, tractors are really, really, really expensive. Don’t expect to upgrade your equipment for a good while when starting a career. Once you get things rolling and have several crops being sold, the money will come rolling in. However, it is a slow and tiring process.

While the visuals are fantastic, the physics of FS15 are quite the opposite. You can run your tractor right over a pedestrian in the street without them even flinching, but if you run vehicle into a close line poll, a dead stop. If you manage to somehow flip a tractor, good luck fixing that. There is no respawn, no auto course correction, just a flipped over tractor sitting in the middle of your field; Forever.

When you’ve had your fill of cultivating and raising livestock, try your luck in the 12 person online co-op. This mode will bring a little more excitement to the game as you can interact with real people this time. This mode is especially helpful for people that need more assistance in the actual process of farming. With the right group of gamers, they can help you better understand the more detailed mechanics. Co-op mode is a great feature on FS15, but is not its main focus. So, don’t get too hung up on a co-op career. The real meat and potatoes of this game is in the single player.

So, what’s left at the end of growin’ season?

Unfortunately, that’s not enough to warrant any long-term attention. Gameplay can become very repetitive and may cause drowsiness. If you don’t already have some sort of knowledge on how to operate a farm, or stepped foot into a cornfield, you might be left with a little mud in your eye. The brief tutorial is in no way helpful beyond basic controls and game mechanics. If you have played previous versions of Farming Simulator, you will feel right at home. Any other non-experienced, non-simulator player will probably fly the coop.

StarCraft 2: Legacy of the Void beta will be different from BlizzCon version