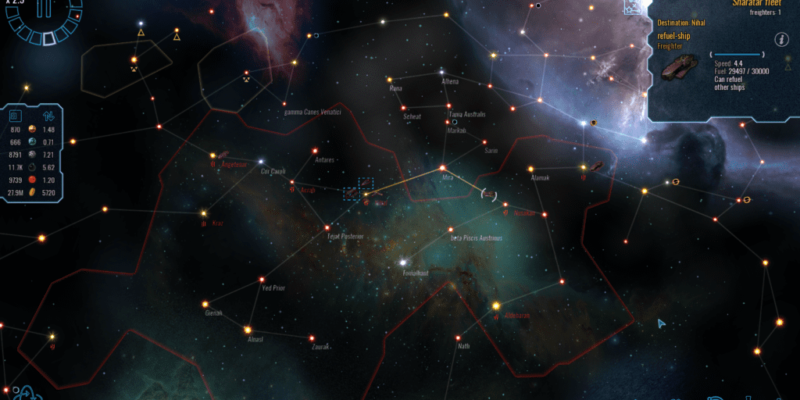 The 4X space strategy box is looking just about as full as it ever has on PC, so to stand out from all the other planet-settling, fleet-constructing, treaty-betraying titles it’s pretty important to do some things either very differently, or much better, than everyone else. “No, but seriously, I’m going to be just like Master of Orion 2” is no longer a convincing pitch. Unless you’re the current Master of Orion remake on Early Access, I suppose (and even that makes the mistake of not being the sequel).

Luckily for 4X game creators, almost every player seems to want something slightly different from this genre. So it’s still possible to find a niche, even with Iceberg Interactive signing up a new contender every other week. Endless Legend (post patches and add-ons) is pretty much my undisputed favourite, but the planet-bound action and unique factions aren’t what everyone is looking for. Some prefer the incredible simulated depth of Distant Worlds, or stick to older releases like Galactic Civilizations 2. Whichever one happens to poke them in their feature happy place.

SoftWarWare’s Polaris Sector takes a pretty familiar 4X approach in many areas, but might do just enough with its basis in logistical planning and tactical combat to rope in the sort of player who desires perpetual space war against AI opposition. 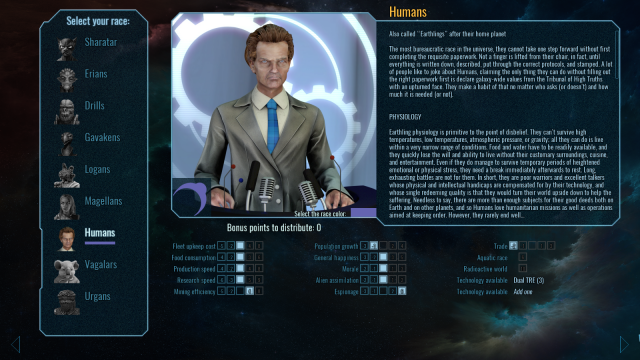 Humans of the future look a little … unwell. I suspect a Thin Man.

The emphasis on warfare is pretty clear from the tutorial, which (rightly) spends plenty of time teaching you about effective use of fighter deployment, and covers the basics of planetary colonization and research, but tells you nothing about diplomacy options between races. Diplomatic negotiations can actually be useful (for things like exchanges of technology or co-operation in scientific research), though even here the options drift towards aggressive demands for tribute, schemes to poke factions into war, or military alliances.

Polaris Sector’s nine races can all be customised in the usual 4X manner, with an overall pool of points that can be spent on improving aspects like production, fleet upkeep, or making the faction aquatic (and therefore more adaptable to oceanic worlds). Naturally, if you boost several areas, then other facets (maybe food consumption, or assimilation with other races) will have to be reduced in kind. The default starting stats portray nine fairly typical archetypes; the intellectual science race, the brutal expansive-war-at-all-costs type, hippy-ish diplomats, lizard-men, and so on. Credit is due for including giant space koalas as an option, though. That’s one I’ve not seen before.

In-game, the AI seems to handle these races fairly logically. The more aggressive ones are prone to demanding planets and resources in an effort to start a war, while less overtly confrontational empires will accept trade agreements and science exchanges (while, inevitably, spying on you like crazy and possibly trying to incite planetary unrest). Sometimes, though, things go a little off-message. While it may simply have been down to the luck of resource distribution, one campaign saw the science-averse Drills soaring away in the scientific rankings. Despite a great deal of background text on each race, and slightly different space vessel designs, there’s not a huge amount to distinguish them from one another during play (aside from a spectrum of being slightly more or less aggressive). 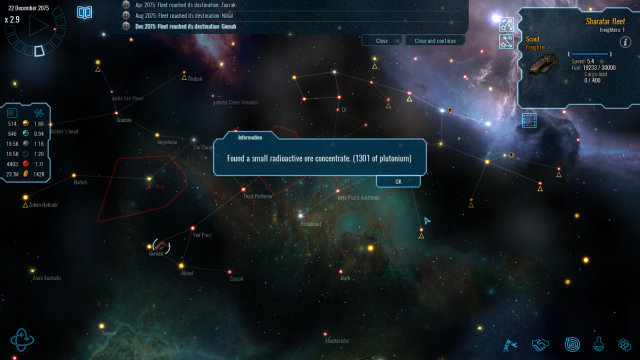 Exploring systems will reward you with resources (and sometimes a multi-part mystery tech).

The opening moves of Polaris Sector are based around scouting and colonisation. Heading out from your starting homeworld to find nearby worlds that will be decent sources of food, minerals, or other resources required for an expanding empire. Travel between planetary systems predominantly takes place down rigid star lanes, so the early game is also a good time to figure out potential defensive choke-points on the galactic map. There are also worm-holes dotted around, to add a few strategic twists.

Planetary colonisation itself can be micromanaged or left ‘bigger picture’at the player’s discretion. Polaris Sector is not perfect with its distribution of automated processes, but on colonisation it’s pretty good. A couple of clicks can request a colony ship be built at the most efficient location, and set about transforming the planet into one of several roles (agricultural, industrialised, research, and so on). If you want to go back in later and change the planet’s role, perhaps in response to a resource glut or crisis, that’s easy to do. You can also micromanage all building construction if you wish.

The planetary automation seems to keep up well with your latest research, constructing and replacing buildings where necessary in light of new technological developments. Further tweaks can be made with specific planetary policies, or an empire-wide adjustment of work hours. Planets can also rebel, if they lose faith in your leadership skills or face major hardship. 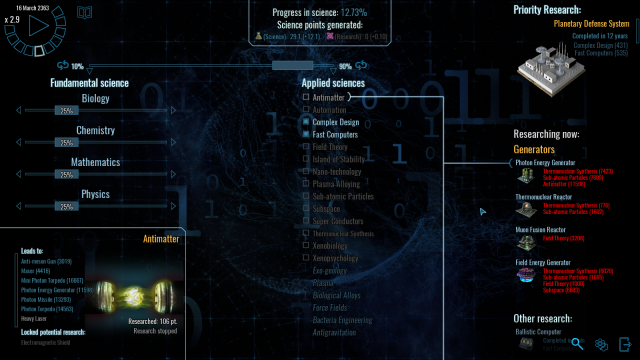 Everyone work on Planetary Defenses at once. Yes, even you plant biologists.

Polaris Sector’s approach to scientific research is one area where it differs from a more standard 4X title. Rather than a tech tree, players can distribute their scientific points between the four disciplines of chemistry, biology, physics and mathematics. The resulting fundamentals (things like ‘particle physics’ or ‘plasma’) then open up more specific research possibilities (new engine types for your ships, or a planetary scanning system). It’s a neat nod to the idea that science can be both focused and quite organic in its discoveries, but does ultimately turn into a more traditional system of just prioritising a specific technology currently required by your empire. A major plus for the system, however, is that it means races can and will specialise in rather different areas over time.

Science can provide you with more colonisation or mining options, but its discoveries mainly feed back into your galactic war machine (which, to be honest, also goes for the colonisation and the mining, as all resources go into a shared pot for the whole empire). Aside from a couple of default starting designs, vessel creation in this game is all down to player input. It’s both a means to create your greatest possible starships from the materials available, and a practical method of solving problems.

In the early to mid game, for example, inter-system travel is heavily restricted by fuel limitations. Scout ships can afford to load up on fuel tanks, but if your fighting vessels are to be effective (and affordable) then they can’t just be a giant vat of space-gasoline with an engine on it. One solution is to tactically space out your colonised worlds as refueling points; but when travel even further afield is required, it makes sense to build specialised refueling ships to cruise along with your main fleet.

Sadly, the fuel issue is a bit one-sided as the AI seems to be free from such limitations. It’s a reasonable internal problem to have to deal with, but you can’t rely on enemy travel restrictions as part of your defensive strategy (because they might just waltz far beyond their ‘expected’ range). Discovering this is rather disappointing. 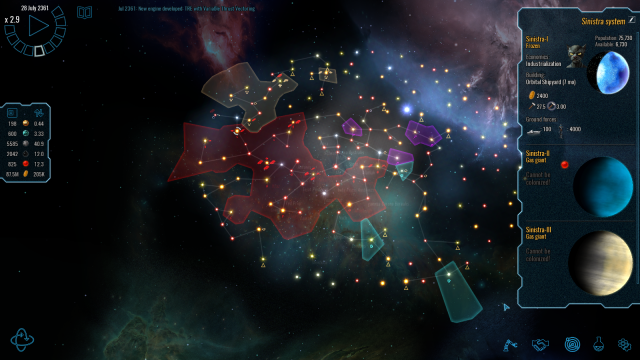 My mighty feline empire expands, leaving fur on sofas across the galaxy.

Ship design takes a grid-like approach, with it left up to players to test their Tetris skills and attempt to fit in all the desired pieces. This in itself is a series of mini tactical decisions based on what the vessel’s role will be, and what kind of resources your empire currently has available. There’s no point building your dream Frigate, and then immediately running out of the vital mineral required for production of its power plants. If the ship will carry missiles, you’ll probably need to leave room for extra munitions. For an espionage vessel designed to gather information and spread unrest, you’ll need to squeeze in a cloaking device and a landing module.

Moreso than even other 4X titles, Polaris Sector is about logistics. The co-ordination of resources, planning, and ship design to protect the frontiers of your empire, or launch a strike at an enemy race. Long-term planning for a rapid, effective attack can avoid a prolonged war, but doing so requires an efficient war economy and an awful lot (rather too much) micro-managing of fighters onto carriers. Your fleet will need support ships, and a follow-up plan for invading (with ground troops) or bombing (if you’re comfortable with a spot of virtual genocide and willing to take the massive diplomatic hit) conquered worlds.

While ground invasions are a simulated battle of numbers, when two enemy fleets meet in space the game transitions to a real-time-with-pause combat session. Corvettes, Frigates and large, immobile battle satellites can all slog it out here, but the real finesse comes from managing swarms of fighters. A deftly deployed group of missile-equipped fighters can make short work of more technologically advanced ships, overwhelming their ordinance defenses with sheer numbers. Of course, other interception-based fighters are excellent at taking down these torpedo bombers, so in a matched battle there can be plenty of feints, false retreats, and clever use of space to get around an opponent’s lack of scanners. 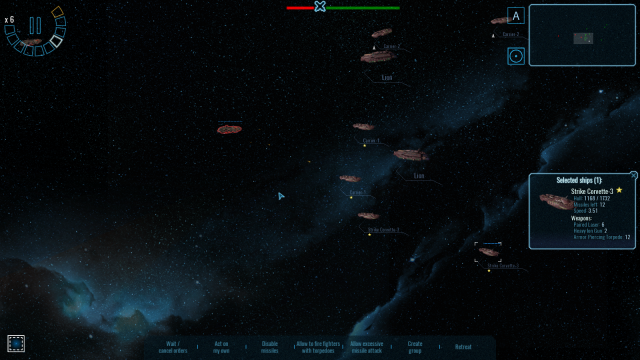 I’d say this is going my way.

Battle encounters are limited by an AI that’s quite keen to just charge things slowly at you (on ‘Normal’ difficulty, at least), and a user interface that takes a while to get used to (RTS players who are deft with their grouping skills should be okay here). Given the sheer number of different ship permutations that could be present at a given battle, however, it’s perhaps no surprise that the AI sticks to some basic tactics and that the greatest advantage in a fight is solid ship design.

Polaris Sector is not a 4X for those who wish to become deeply immersed in unique faction design or galactic atmospherics. But for those who crave military logistics, mapping fuel routes, or constructing the perfect invasion fleet, this title borrows a lot of structures from traditional supply-line wargaming. Sparing use of automation can remove a lot of the potentially irritating micro-management from these processes, though this still remains when trying to ferry large amounts of ordinance across the galaxy, and simple options like building a carrier with a set number of fighters already in the hangers are not present. It’s a stark game at times, and one which has a tendency to keep the player at arms length, but dedicated military strategists should find enough to keep them engaged through Polaris Sector’s century-spanning campaigns.