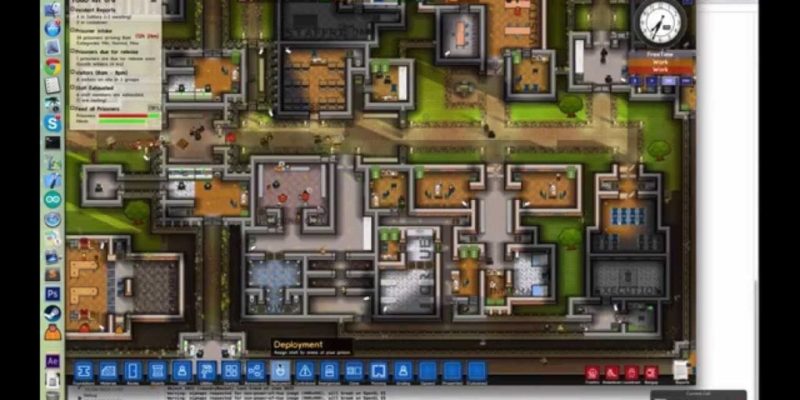 Psst: I’ve heard on the down-low that Introversion have added snitches to Prison Architect, and made mods more powerful. Keep it quiet, though, yeah?

Snitches – or “confidential informants”, if you want to be fancy – let you find out what’s going on in your prison, on the down-low. A prisoner who’s under sufficient duress (like a recovering addict, or someone sentenced to solitary for awhile) can be recruited as a CI in exchange for, say, letting them out of solitary a bit sooner. Once they’re recruited, you can activate them at any time to bring them to the security office, at which point you can find out a fair bit about what’s going on in the prison. Who’s got the drugs? Who’s pinched a drill? Who’s arranged for booze to be thrown over the walls? Etc.

However, every action you take will raise the suspicion the other prisoners have of your snitch, and they’ll eventually turn on him and beat him to death. It’s the old counter-intelligence problem: if you act on every piece of information you have, you’re going to stop getting information. On the other hand, if you cherry-pick and let some dreadful things go on, while only acting on certain bits and pieces, you can keep them uncertain and keep your snitch alive.

Oddly, this isn’t the biggest change to Prison Architect this month. Most of the month has been devoted to mods, which is a rather sizeable thing.

Previously, the modding community could only really edit what was already in the game, but now you’ll be able to add your own bits and pieces. The alpha video shows a test mod created which adds in the “Vegetable Patch” area; this requires a (new) bit of unlocked technology, but it adds in a new outdoor room and allows you to have prisoners grow vegetables that can then be cooked in the kitchen via the (new) preparation table. Of course, they’ll need to take part in the (new) Horticulture reform programme first!

There are a few limitations, though. Right now it’s hard-coded that workmen build everything, so they’re the ones heading to the vegetable patch instead of gardeners. Another is that the game currently only supports one mod with custom graphics at a time – you can’t have a vegetable mod with new graphics, and another mod that adds jacuzzis with new graphics, at the same time. That will apparently be sorted by next month, though.

There’s a lot of stuff you can do with this, though. One example given is that you could add a Spirituality need that one in three prisoners will have, and they need to fill this by going to church – and, possibly, by taking drugs. Up to you, if you want to create that sort of duality.

Anyway, I’ve blithered on enough and the 40-minute Prison Architect video explains everything in much better detail than I ever could. Have a look at it below.

By Michael Feghali58 mins ago
Hardware