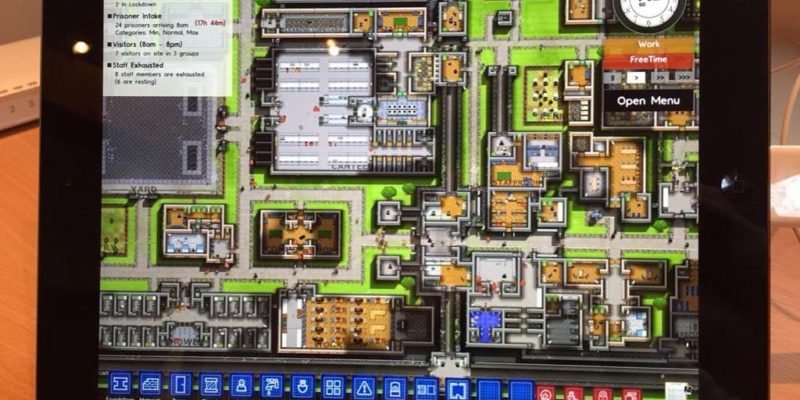 Sad news, everyone: this Prison Architect alpha update is a bit TRAITOROUS.

Roughly the first half of the update is devoted almost entirely to the progress of the tablet version of Prison Architect, which doesn’t really have much of an impact on the ongoing development of the proper version. There are a few improvements that’ll flow back to us – a lower memory footprint, for one thing – but they’re unlikely to have any major effects for anyone with a relatively modern PC. If you’re more concerned about new PC stuff, you might want to skip to around 13 minutes in.

So, what is new? Mostly minor quality-of-life stuff. The biggest thing is probably the addition of prisoner intake control; there’s now a pool of available prisoners that grows every day, and it’s up to you to decide how many Minimum Security, Medium Security, and Maximum Security offenders you want to move into your concrete house. If you want no new prisoners for a few days, you can now do that! You just won’t get any bonus for the intake.

You can now manually tidy wires in wire mode, too, so that your electrical systems are now less of a horrible visual clusterfuck. It’d take awhile to sort out in any long-running prison, but it’s something to bear in mind everyone once in a while.

A few changes have been made to parole, too. Parole programmes now use a parole officer and a parole lawyer, both of whom come in externally, so you won’t have the problem of more prisoners up for parole than your staff can actually handle. The fine for reoffending prisoners has now gone, meaning that it’s no longer a “bet” as to whether or not people reoffend; you’ll still get a bonus if they don’t, and you’re still at risk of getting fired if you parole too many reoffenders.

Finally – and most entertainingly – prisoners locked in solitary confinement will now be fed, so you can’t use solitary confinement as some sort of off-the-books execution system for problematic prisoners… although you can still set the cell door to “locked”, in which case the guards won’t be able to get in to feed them. And this doesn’t stop the many other possibilities for murdering your prisoners. Ahem.

Prison Architect Alpha 30 should be out now.

Blitzkrieg 3 will shockingly make you pay for it

Mortal Kombat X has a story, and this trailer proves it