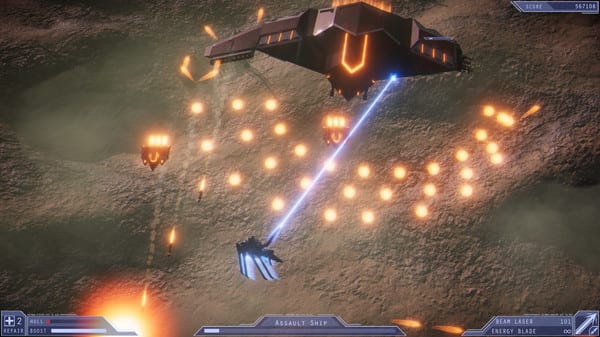 For those of you looking to fulfill your need for twin-stick shooters, Sleepy Spider Studios has you covered. The team has just released its newest game, Project Aether, inspired by old school shoot-em-ups from teams like Treasure and M2. It also has mechs, so if you love those, you’re really in for a treat.

The game puts you in a mechanical AETHER unit as you take on a mysterious alien force. They’re definitely on the hostile side, so you’ll want to lock and load to fend off their invasion of Earth.

Lock and load with a variety of weapons

Project Aether comes with a number of loadouts that you can customize however you see fit. These include two swappable ranged weapons, along with a saber that lets you cut enemies that get too close. Combining attacks lets you become a dangerous force from near and afar, though you’ll need to keep on your toes.

In all, players will take on nine levels of challenges. These include not only a slew of enemies, but also large bosses requiring heavy firepower to bring down. Quick reflexes will be necessary when it comes to taking them on and surviving.

Sleepy Spider Studios’ Ryan Shim explained the motivation behind the game. “Our goal was to provide a fast-paced and fluid game experience, and we feel we’ve delivered on that in a way that players will find very satisfying.” He also noted how the game will “reward constant mobility and quick reflexes to keep up the game’s momentum.”

Currently, Project Aether is on sale in the Steam store, going for $12.99 for a limited time. Those of you seeking out a great game where skills pay off, this is definitely the mech to climb into.

Check out the debut trailer below, and be sure to take this project head-on if you get the chance.