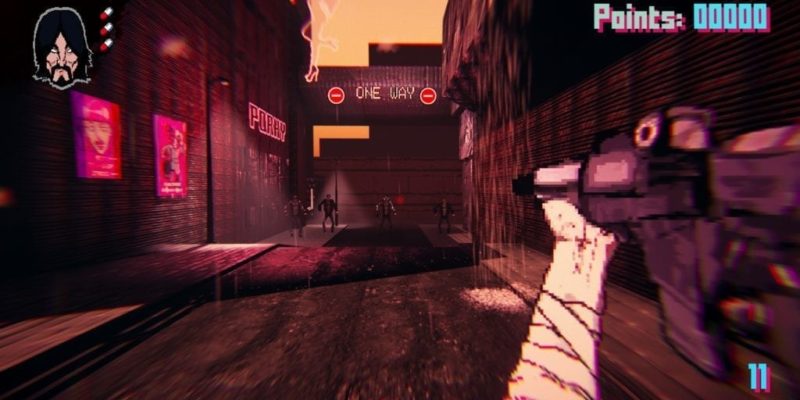 Hotline Miami was a great game. Its ’80s-inspired neon visuals and gameplay focused on fast, risky killing made it a huge hit, so understandably, people would want to replicate what made it work so well. Project Downfall from MGP Studios and Solid9 Studio, which entered Early Access in March, seeks to do just that in first-person. It’s got some big shoes to fill and there’s a lot of work to be done on its way to being finished. So, how’s it shaping up?

The retro neon atmosphere and even various aspects of the font and way things are colored are strongly reminiscent of its inspiration. However, Hotline Miami worked so well because all aspects of it were finely-tuned to suit the gameplay and the exact experience the devs intended. This game doesn’t appear to understand that at all.

The biggest problem that Project Downfall has is its failure to use perspective and space in its attempt to emulate Hotline Miami. That game gave you a clear view of your surroundings and let you plan accordingly. This game does the opposite. Instead of being able to know where your enemies are and being able to use the environment to deal with them, it’s impossible to see many of your foes and it forces you to contend with them in wider areas that don’t have much in the way of cover. There isn’t even a crouch button to protect you from incoming gunfire. 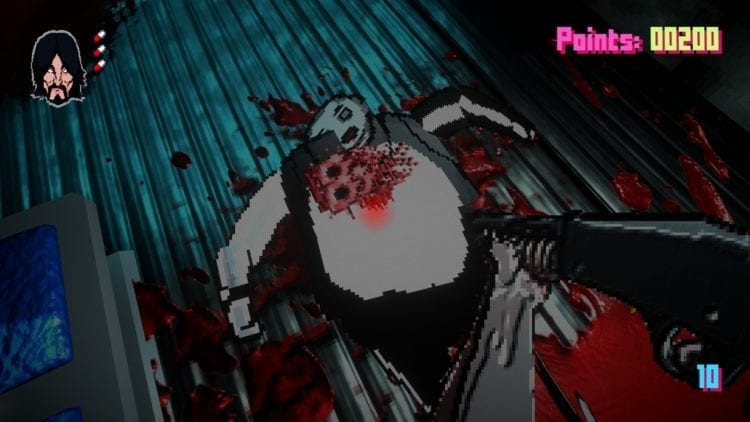 On top of that, Project Downfall just obscures your vision far too much. Some areas are practically unlit or the area geometry is black, making it very difficult to see anything at all. There were times I kept repeatedly getting killed by an enemy standing in one of these pitch-black corners and I had to get lucky and see where the gunfire was coming from. The game also loves to make things extremely foggy, which makes identifying distant threats a big problem.

One level features a wide parking lot with practically no cover. There’s a rail in the middle dividing both sides of the lot, and both of these have enemies in them. The one farthest from your only point of entry has two enemies standing by the railing. Once they see you, they start shooting. But even though the railing doesn’t block their shots at all, it sure as hell blocks yours. So you then have to fight through all of the enemies in the closest area while avoiding the gunfire from the others to make it to them. It just doesn’t work. And that’s the third level.

Another level had me fighting a bunch of enemies in a tall stairwell situated above a lobby. Once again, I couldn’t see my enemies and I died repeatedly to potshots from above. It’d be one thing if these types of sections were solely based around memorization too. But you often just need to get lucky. Plenty of levels open with you immediately taking fire. Your principal defense against this is Project Downfall‘s crutch — pills that let you go into bullet time. But these only allow you to escape damage sometimes. I would frequently pop a pill as soon as these levels started. Sometimes I was able to avoid gunfire and take the enemy out with a pill-powered death kick. Other times I got killed immediately. It’s totally luck-based. 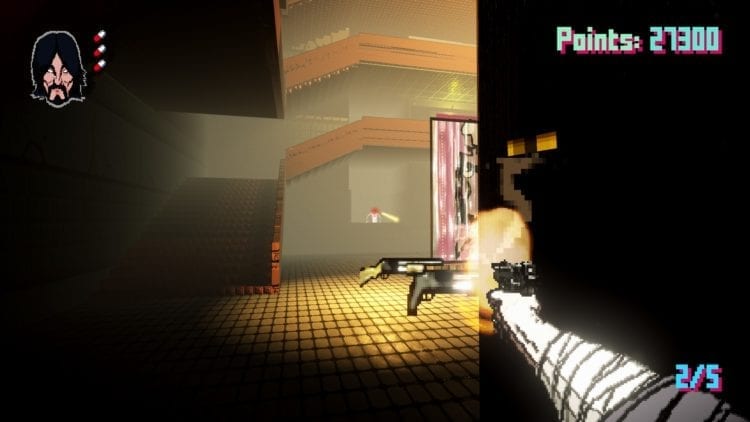 These issues would be more tolerable if the game weren’t so weird about weapons. Project Downfall has a level structure, but each level you select at your car is more of a chapter made up of a handful of smaller levels. Each of these level chunks starts you out barehanded too. Really fancying the gun you had at the end of the previous chunk? It’s gone. So you’ll have to start immediately getting pelted with enemy gunfire that you may or not be able to dodge and you won’t even have a weapon. And speaking of the weapons, some of the guns just blow.

Project Downfall has a typical assortment of guns. Pistols, Uzis, rifles, shotguns, you name it. But they frequently have very little ammo and just feel kind of bad to shoot. Some are also insanely inaccurate. There are two kinds of shotguns, one of which takes the whole incorrect “shotguns have insanely short range” trope to a ridiculous level. You can seriously aim it at an enemy a few feet in front of you and not hit them. It’s basically a melee weapon and you’re probably better off barehanded. The Uzi is also extremely inaccurate. I get that it’s a submachine gun, but it’s borderline impossible to hit what you’re aiming at a lot of the time, even if your enemies have no such issue. 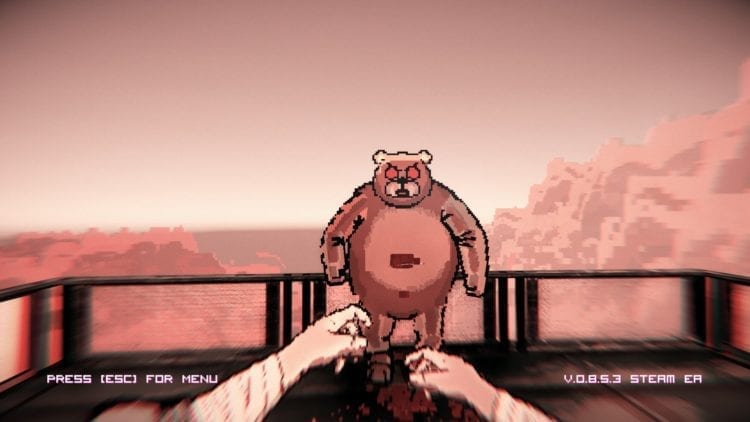 Just like in Hotline Miami, you die really fast. You take the same amount of damage your enemies do, but I found it really, really hard to avoid damage most of the time. The damage can also be questionable, as it can take more than one headshot to kill your foes, depending on the weapon. The enemies themselves also look like janky nightmare creatures despite being human. They mostly come in two varieties — fat guys with perfectly round, white heads that look like Strong Sad from Homestar Runner with severe head trauma and lanky guys that look like Apu from One Piece.

The visuals are a bit of a mixed bag so far. All of the characters are sprites, with only your appendages and the weapons you hold looking decent. The melee strikes don’t have enough animations. The punch, in particular, doesn’t look like a punch at all. It’s more like someone looking at a wristwatch for a second. The environments can look fairly good, but they’re just too hard to see in and often devoid of noteworthy features. Most rooms are as shiny as they are empty. Project Downfall’s performance is also pretty bad. Even on medium settings, the game’s frame rate will just randomly halve for no reason. The movement can also feel quite clunky and slow. I often feel like I’m moving in slow motion, regardless of whether or not I’m using a pill.

So, Project Downfall has a pretty substantial list of problems, but it can actually be fun or satisfying in spots too. Killing an enemy with a pill active causes their gun to hang in midair, which is how you’re meant to obtain a gun while barehanded or when emptying the last of your bullets into an enemy. It’s pretty neat to pop a pill, kick an enemy, grab their gun in midair, and dispatch several of your foes before the pill wears off. The death animations are also pretty brutal and make successfully chaining multiple kills together a sight worth seeing. There are multiple routes through the game that can lead to different stories playing out, which was an interesting choice as well. 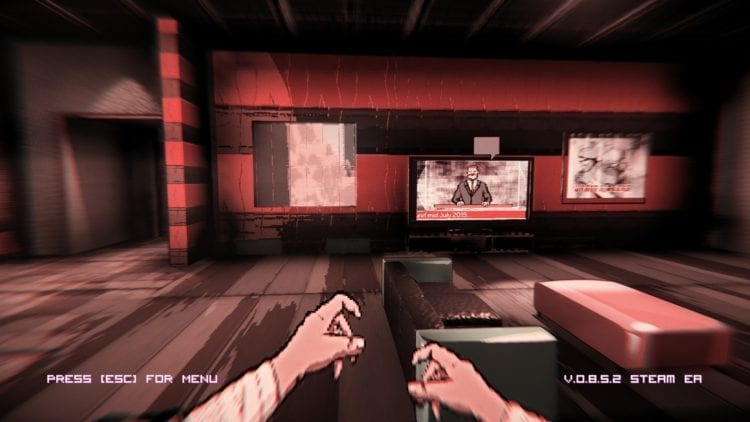 While I can’t recommend Project Downfall in its current state, I really do hope the devs iron out these issues. With better level flows, ways to actually see what you’re up against, and some weapon tuning, it could be a fun game. As of now, though, the game is frustrating and a pain to play through. Quite a hard pill to swallow indeed. 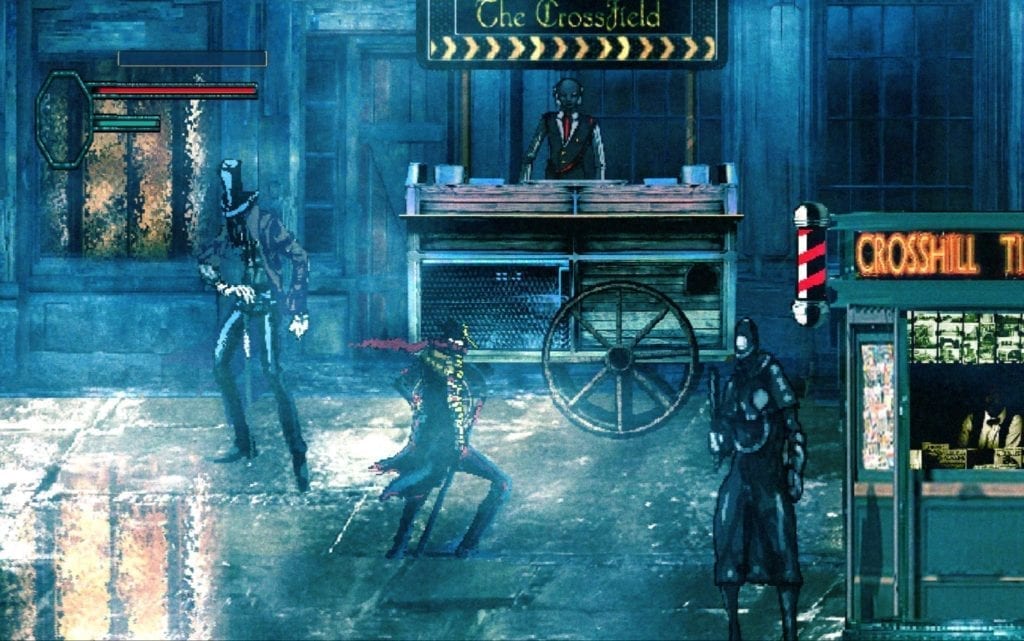