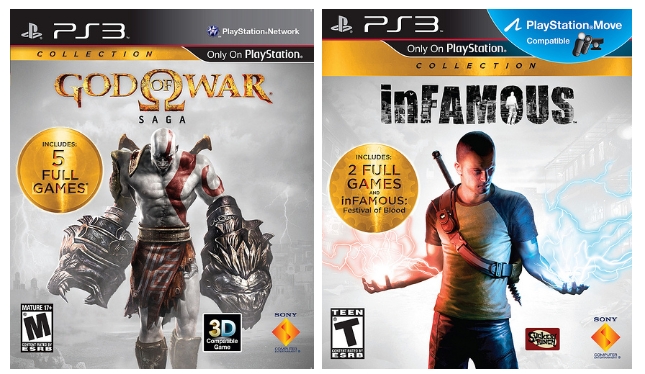 Sony has announced two more ‘Collection’ bundles alongside the previously-revealed Ratchet and Clank set. From 28 August, you’ll be able to grab yourself the five-game God of War saga and an Infamous set which includes both games and the ‘Festival of Blood’ standalone DLC.

The Infamous bundle will also include a couple of extra missions, additional character costumes and weapon styles. It’s not entirely clear if these are new for the collection, or previously-released DLC that’s being included too.

Meanwhile, the God of War set will feature the existing God of War trilogy, plus God of War: Chains of Olympus and God of War: Ghost of Sparta (both for the PSP). “Exclusive bonus content” is promised, along with PlayStation trophy support, HD remastering (where necessary) and a one month voucher for PlayStation Plus.

Both sets will sell for around $40 USD apiece.

It looks like these game bundles will become a regular thing for Sony, as the PlayStation Blog advises keeping an eye out for further news of games that’ll be getting a Collection of their own.