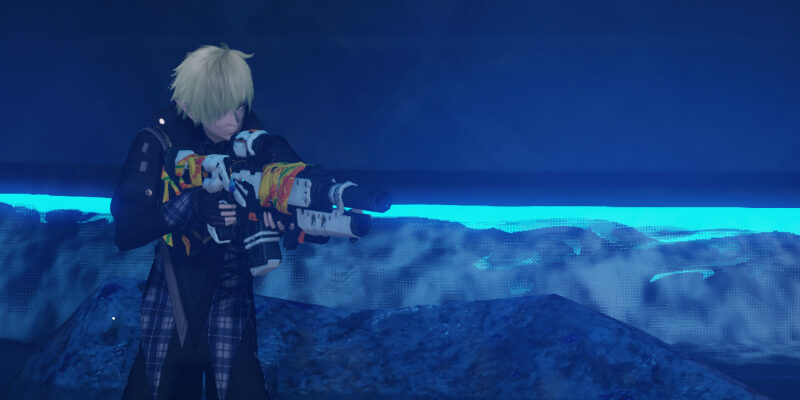 There are six classes in Phantasy Star Online 2 New Genesis, all with their own unique playstyles. Understanding how these classes interact and how to get the most of them is vital in becoming the best player possible. One of the most popular classes in PSO2 New Genesis is the Ranger, a medium-range, gun-based class.

The rifle is the primary weapon rangers use. The rifle is an automatic medium to long-range weapon that delivers consistent damage over time. It doesn’t have the best DPS potential by any means, but its high fire rate and near infinite range make it more forgiving to use than most other weapons. 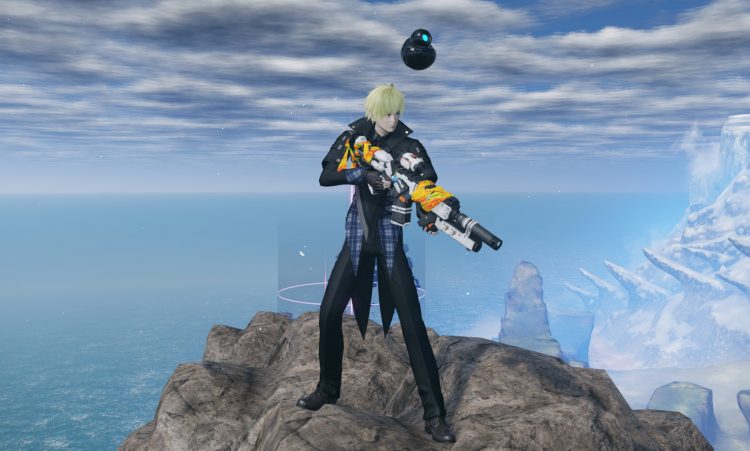 Furthermore, rifle has access to a strong weapon action in Slide Shot. When used, Slide Shot allows the user to slide out of the way of an enemy attack whilst dealing a decent chunk of damage at the same time. This weapon action plays into the rifle’s reoccurring theme of being a mobility based weapon. It’s best used in scenarios where staying on the move to avoid getting downed is more important than dealing as much damage as possible.

The launcher, in contrast to the rifle, is a hard-hitting weapon that greatly limits mobility when fired. This is rarely used as a primary weapon and instead functions best as either a switch or in a multi-weapon. Rangers often make use of a rifle/launcher multi-weapon as the two weapon types cover each other’s weaknesses well. 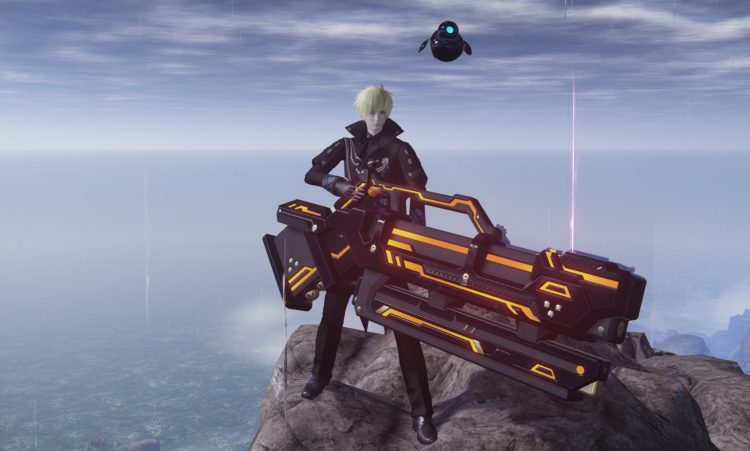 The weapon action for launchers is Sticky Bomb. This isn’t so much a DPS-centric weapon action and is instead used to regain PP quickly. However, its uses are situational. It’s usually easier to regain PP by simply switching to a rifle and auto-attacking. However, any players looking to exclusively use launchers will want to make use of Sticky Bomb to minimize their Photon Arts downtime.

The Ranger class has one of the most straightforward skill trees in PSO2 New Genesis. You want to spend your first fourteen skill points on picking up and maximizing every skill except for Bad Condition Ward and Bad Condition Reduction. Use the remaining six points on either one of these skills or split the points and assign three to each.

Blight Rounds is the most important skill available to Rangers. It allows the player to mark a specific spot on an enemy. This marked location acts as a temporary critical zone, granting an extra 20% damage to any attacks that hit it. This effect applies for both yourself and everyone nearby making it extremely strong when used in large groups. Interestingly, Blight Rounds can also be used to mark mineral ores like Trinite for other players to find easier. 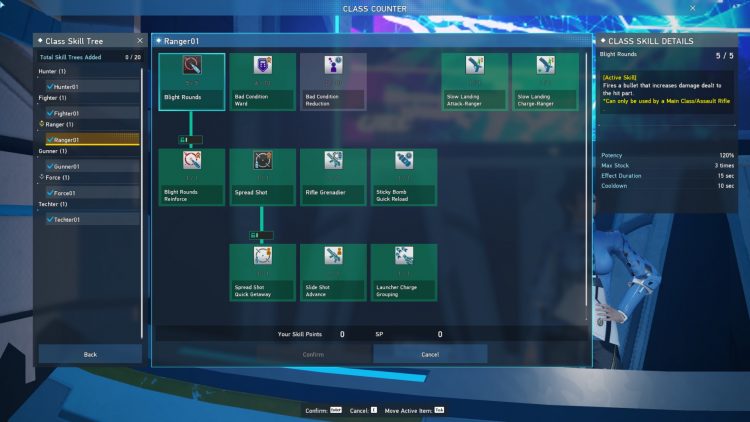 Spread Shot is also worth picking up as soon as possible. This active skill turns your rifle into a shotgun for one large burst attack. Although the effective range of Spread Shot is just a few meters, it is fantastic for dealing large chunks of damage to downed enemies. This skill improves even further when Spread Shot Quick Getaway is obtained. This grants Spread Shot a lengthy invulnerability period, meaning that it can be used to dodge otherwise fatal attacks at close range.

The last vital skill to unlock is Slide Shot Advance. This gives your rifle’s weapon action an invulnerability period. With this skill unlocked, Slide Shot becomes the most reliable dodge the ranger class gets access to. The other remaining skills are either simple quality of life improvements or aren’t overly important.

Although every Photon Art has its use, only three of the Ranger’s are necessary to play optimally. For the rifle, the best Photon Arts are Homing Darts and Blaze Shot. Homing Darts provides some of the best area of effect damage in PSO2 New Genesis, making the ranger class a great choice for farming mobs. It can be spammed during PSE Bursts to kill large groups of enemies faster than any other class.

As for Blaze Shot, this is a rapid fire Photon Art that deals decent damage whilst providing extra mobility. This is best used around ten meters away from a target whilst you circle them, avoiding incoming attacks in the process. It is far too inaccurate to use at long range and doing so is actually weaker than just using the rifle’s auto attack.

The launcher is perhaps the easiest weapon to use in the whole of New Genesis. Assuming it is utilized as a secondary as intended, only one Photon Art needs to be used. Fear Eraser is the best damage dealing ability available to the Ranger class. When triggered it fires a large beam of energy at an enemy, lasting as long as your PP remains above zero. Just before Fear Eraser ends it fires a concentrated blast at the enemy for a large chunk of damage.

Other Photon Arts like Razing Shot and Multi-launch are decent and can be mixed in to vary up gameplay. However, these don’t necessarily improve overall DPS and adding unnecessary keybinds may get confusing for some players.

Despite its popularity, Ranger is perhaps the most misunderstood class in PSO2 New Genesis. Contrary to what many players assume, it is more of a support class than a DPS one. The focus of a Ranger is to improve the overall damage of their team rather than focus on their own damage output.

Those looking to get the most out of the class need to understand that applying Blight Rounds to the correct spot is the priority. Consistently improving your team’s DPS by 20% will always be more impactful than anything you can do alone. Therefore it’s best to go away and learn what spots should be targeted for each boss to help your team secure faster kills. 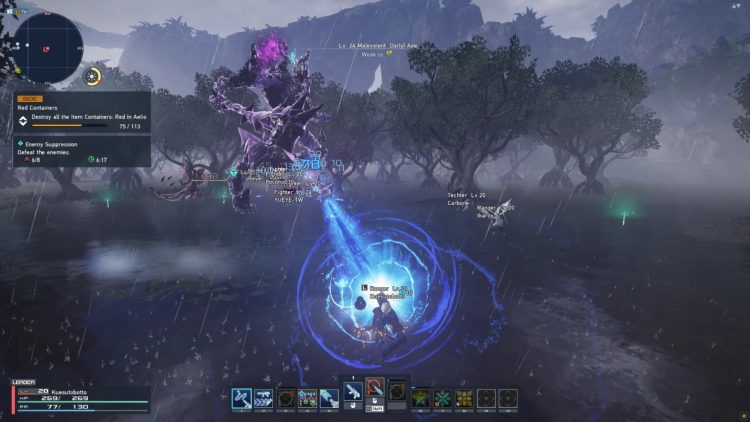 However, if you are teamed up with another Ranger who understands their role, do not use Blight Rounds. Blight Rounds can only be applied in one spot per enemy. Placing it on a different spot will replace your teammate’s Blight Rounds and confuse other players trying to follow the marked spot.

Valve has revealed the Steam Deck, an ‘all-in-one’ PC handheld on sale this December