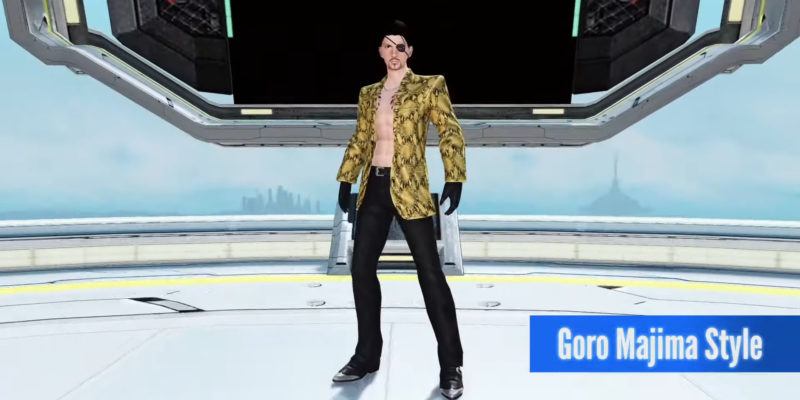 Despite the rather, erm, messy, PC release of Phantasy Star Online 2, there are still plenty of reasons to keep grinding away. Earlier today, Sega announced the Sega Legacy collection, which brings a host of neat costumes from the developer’s gaming history. Yakuza, Valkyria Chronicles, and Virtua Fighter are all franchises contributing threads for PSO2 players. Which means, of course, that soon you’ll be able to cosplay as the infamous Mad Dog of Shimano, Goro Majima.

To be honest, the Goro costume is likely the only one I want from the deal. There are more to choose from Sega’s dusty old closet. The Sega Legacy collection includes outfits from Valkyria Chronicles characters like Kai Schulen or Alicia. You can also dress up as Akira from Virtua Fighter for your Bouncer character.

The collection contains more than some new threads, though. Weapon skins based on the characters, as well as hair styles and accessories, are included. There is also another rather unsettling addition: a crab walk emote. This…this ain’t it. I’m telling you now, if I see any of you crab-walking as Goro Majima like he stepped out of The Exorcist, that is the day I uninstall the game.

Outfits from the Sega Legacy collection are on sale starting today. You have to purchase them via AC Scratch Tickets, which cost around 200 AC ($2 USD) each. You can check the official page if you want to see every item available. Just be quick if you find something you want; the collection will only be around until June 14 at 11 PM PDT.

A bit of a marred phantasy

PSO2 launched on PC in late May to some underwhelming results. The launch was marred by issues, many of which can be traced back to the shoddy Windows 10 launcher.

Those problems aside, we also didn’t feel that the game was completely worth the wait. Our 6/10 review noted its clunky interface and lack of content from the Japanese version. It’s still worth a play for Phantasy fans and those with a lot of time to kill — if you can manage not to pull your hair out because of it’s horrible Windows 10 launcher.

Phantasy Star Online 2 is free to play on the Windows 10 store. Good luck.

The Waylanders coming to Early Access on June 16th